GLASGOW — After more than two decades on the soccer sidelines, one of the game’s most celebrated fan groups finally has a chance to cheer on its team again.

The Tartan Army is back.

Its reputation precedes it. Throughout the 1970s, ’80s and ’90s, Scotland was a regular presence at soccer’s biggest competitions, and so were its tartan-clad fans. Rambunctious, joyous and thirsty, the Tartan Army became a tourist attraction in its own right, a traveling horde of merriment that stood out in a culture in which fans were all too often known for leaving behind a trail of blood and broken glass.

“They love us,” Alan Paterson, a retired schoolteacher, said of the cities and countries he visited in his years following the national team. “We’re going to spend a lot of money, and they know we’re not going to be a lot of trouble.”

The problem is that, after the 1998 World Cup in France, the bagpipes stopped playing. Scotland’s soccer record became a string of disappointment and near-misses. This week, though, after a 23-year absence, the Scots are back on the big stage at last.

On Monday, they will open play in the monthlong European Championship with a game against the Czech Republic in Glasgow. But it is the second game, against England in London, that stirs the most emotion for the Tartan Army.

Somewhere in Paterson’s yard there is a patch of turf that has been growing for more than 44 years. Paterson is not quite sure where it is at the moment, but he remembers exactly where he was when he acquired it. 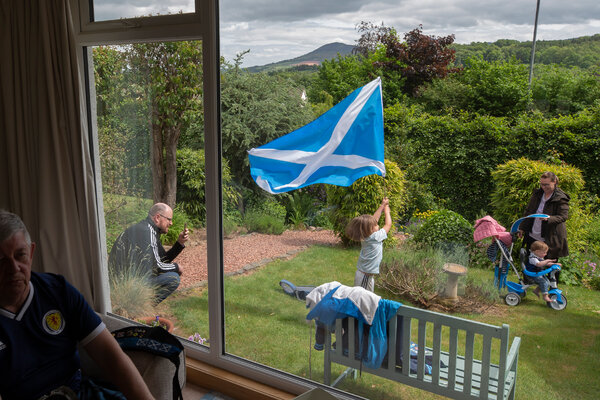 Paterson, now 66, was among the thousands of Scottish soccer supporters who streamed onto the field after their team outclassed England in 1977 during what was then a biennial pilgrimage to Wembley Stadium for an encounter between Scotland and the Auld Enemy.

Paterson was not alone in carrying the spoils of that famous victory back home. Buses and cars headed north after the match were loaded with turf. Hamish Husband, then 19, remembers seeing a group heading out on Wembley Way, the famous thoroughfare that leads toward England’s national stadium, with pieces of the goal posts. Images of the Wembley pitch invasion by Scottish fans that day remain etched in British soccer folklore.

“You are really divided between appreciating the delight of the Scottish fans but not wanting to see the ground pulled apart like this,” John Motson, the BBC commentator that day, said as the crossbar on one of the goals collapsed under the weight of fans.

“There was a lot of drunkenness and a lot of young guys falling about,” Paterson said. “Things were getting a bit out of hand.”

While there was little violence, the images worried officials at home. Hooliganism had taken hold in England during the 1980s and ’90s; pitched battles involving soccer fans became commonplace; and nations drawn to face England would regularly brace for violence. So within a few years, match-going veterans of those times said, Scottish fans decided to take the opposite tack.

Tam Coyle, a veteran of more than 100 overseas games since 1985, recalled how fans started a chant with lyrics that included the words “We’re the famous Tartan Army, and not the English hooligans.” And Richard McBrearty, the curator of the Scottish Football Museum in Glasgow, said the rivalry with England was so deep that even the Scots’ reputation for good behavior could be traced to it.

“The Scottish fans wanted to isolate themselves,” he said. “They wanted to say, ‘Look at us, we are better than the English.’”

By the 1980s, Scotland’s fans had become an attraction in their own right. The Tartan Army was a traveling circus — decked out in kilts, bonnets and tartan — that was seen as a welcome curiosity in the towns and cities it visited, and a source of easy profits for the hotels and bars the fans would keep busy until closing time.

Even brushes with the law are remembered fondly. Paterson recalled the time he bought brandies for the police officers idling in a car before a game against Sweden at the 1990 World Cup. A year earlier, he said, he was in Paris for a qualification game when a Scottish fan emerged from the back of a police van to huge cheers after swapping clothes with a gendarme.

When policing was required, it was often provided by the fans themselves. “There’s a pride in behaving well,” Paterson said.

Low expectations helped foster good humor. Much of this was born out of the famous failure of the star-studded Scotland team that went to Argentina for the 1978 World Cup, only to be eliminated after just two games, including a draw against Iran.

“On the back of that, for a lot of Scotland fans, there was almost a change in ethos of supporting the team,” said McBrearty, the curator. “Of course they wanted to watch the team, and wanted it to play well, but there was a decision that they were going to go out and enjoy the experience first and foremost.”

By the time the 1998 World Cup was played in France, the Tartan Army’s popular appeal and global standing had largely surpassed its team’s. While Scotland tumbled out of the tournament, finishing at the bottom of its first-round group, the Tartan Army headed home with its reputation burnished. FIFA recognized it as the tournament’s best fan group, and the city of Bordeaux took out a full-page advertisement in Scotland’s most popular newspaper.

But there would be no comeback. Fans like Paterson, Coyle and Husband, for whom following Scotland to championship events formed a backdrop to their lives, have waited more than two decades for their team to get to another major tournament. For younger fans like Gordon Sheach, 32, the wait has been just as excruciating.

Scotland’s presence at the 1998 World Cup, Sheach said, was a transformational experience, the moment he fell in love with soccer, and with his national team. It was also the moment he decided he wanted to join the Tartan Army at a tournament.

But his chance never came. As he grew from boy to adolescent to man, Scotland persistently — maddeningly — found new and painful ways to fail. “I think it almost got to the point where you kind of emotionally disconnected Scotland from major finals,” Sheach said.

But even during those years of failure, Scotland’s traveling army stayed on the march. It would turn up at friendly matches and qualifying games near and far, in outposts like Lithuania and Kazakhstan. A charity affiliated with Scottish fans, the Tartan Army Sunshine Appeal, makes a donation to children’s causes in every country where Scotland plays a game. There have been 83 consecutive donations totaling more than $200,000 since 2003, according to the charity’s secretary, Clark Gillies.

But when Scotland finally ended its exile, its fans were absent, forced to watch from home because of the coronavirus pandemic. The team kept its supporters on edge until the last ball was kicked in a penalty shootout against Serbia in Belgrade.

The stadium was empty, but the country was transfixed. Paterson said he slipped out of his house into the pitch-black November night. He could not watch.

Goalkeeper David Marshall’s penalty save set off celebrations in homes across the country, and midfielder Ryan Christie’s emotional interview in the aftermath brought many to tears.

“I’m gone,” Christie said as he choked up. “For the whole nation, it’s been a horrible year, for everyone. We knew that coming into the game we could give a little something to this country, and I hope everyone back home is having a party tonight.

“Cause we deserve it. We’ve been through so many years — we know it, you know it, everyone knows it.”

Scotland, and the Tartan Army, is now back in the big time. Sheach, who was a boy the last time that happened, is hoping Scotland’s presence at the Euros this summer will have the same effect that its appearance at a World Cup 23 years ago had on him.

“This summer will be massively inspirational moment for a whole generation of supporters who can see Scotland at a tournament for the first time,” he said.