It's often said that civil wars are bloodier, more savage and leave longer wounds than any other kind of conflict.

Soccer's internal conflict may have looked to have healed the divisions within the game when the board spill in November ousted Steven Lowy, saw a new chairman in Chris Nikou appointed and several new board members elected and members of the old guard turfed out.

But was that only a partial salve? 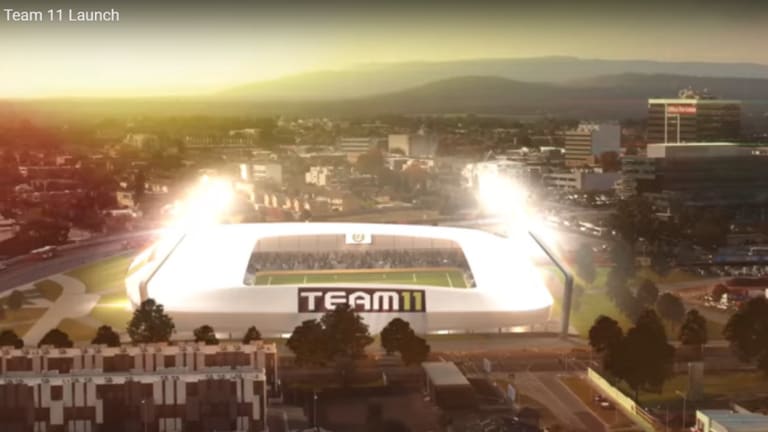 An artist’s impression of the potential new stadium in Dandenong, from Team 11’s bid.Credit:Team 11 bid

Plenty more wounds will be incurred on Wednesday, along with bruised egos and burned mountains of cash, when – or if – the new board makes a decision on which franchises to admit to the A-League next season as part of the first phase of expansion.

That the league – with flat attendances, falling TV audiences and enveloped by a state of ennui – needs a spark to make it crackle again is without doubt.

Expansion is vital to rekindle interest and the FFA says it wants two teams for next year.

The number of applicants initially expressing interest ran into double figures although these have now been whittled down to half a dozen.

Several outsiders say that two isn't enough. Four should be admitted in time for next season to really provide a big bang to relaunch what is looking like a jaded competition.

Others say why not go the whole hog and if the six that are in the running now pass muster, let them all in.

The latter won't happen, of course; it would be seen as a leap into the dark.

And there would be concerns over the capacity of the broadcaster Fox to actually cover that many games (eight a weekend) should such expansion happen.

The process in the lead-up to Wednesday has been bitterly fought and bruising.

The existing clubs are not keen on some of the new bidders, claiming they might encroach on their territory or steal some of their fans (even though those fans have had upwards of five years and some cases more than a decade to become committed supporters).

Rival camps within Victoria and NSW have taken potshots at their opponents.

All sides have tried to galvanise public opinion via social media, some co-ordinating campaigns aimed at influencing (or shaming, depending on how you regard these things) politicians in their regions for either not supporting their bid or turning a blind eye to proposals for support for their rivals.

Some – the West Melbourne Group in Victoria and Southern Expansion in NSW – have said that if their bids don't get up this time they may fold their tents and not apply again.

A combination of circumstances, largely based on property prices and land use criteria, will deter them from going on if they are knocked back this time, according to reports.

Other sources have suggested that the A-League clubs, even if they are desperate for some sizzle to be brought back into the competition, are concerned about the short time frame that any new teams might have to get up and running between the new year and an October kick-off.

There is also some doubt as to whether the board itself is in a position to make such a momentous decision. Two of the new members, Remo Nogarotto and Joseph Carrozzi, have had professional relations with at least one bidder in the lead up to the final process.

Questions were also raised at to whether another new board member, Canberra's Heather Reid, the vice chair, might have to abstain because she was once the chief executive of Capital Football.

Fox Sports, the broadcaster whose rights fees underwrite the competition, is also a major factor in the decision. It has indicated its preference is for new teams in the biggest markets of Melbourne and Sydney, which would, it seems, put Canberra at a disadvantage.

It's a tangled web, typical of the conflicts and cross interests that seem to beset so many sports in Australia.

When the decision is taken – if it is taken – there will be jubilation in two camps, despair in the other four. Whether the bloodletting will abate thereafter is anyone's guess.