It was an exciting day of action, with several games coming down to last-minute plays. There were a few surprising upsets and even more turbulence in the N.F.L.’s worst division.

Here’s what we learned:

Ohio suddenly has an intrastate rivalry. A game between Cincinnati and Cleveland got off to an inauspicious start when Joe Burrow and Baker Mayfield were intercepted on their first drives. Odell Beckham Jr. of the Browns was lost to injury on that opening drive, and the Bengals were leading by 17-10 at halftime. But in the second half, the game morphed into a heavyweight bout. And Mayfield, the No. 1 pick in the 2018 draft, just barely outlasted Burrow, the No. 1 pick in 2020, by finding Donovan Peoples-Jones for a 24-yard touchdown with 11 seconds remaining that put Cleveland ahead to stay.

After starting the day with five consecutive incompletions, Mayfield went 22 of 23 the rest of the way for 297 yards passing and five touchdowns, and Cleveland scored on all four of its second-half possessions. Burrow nearly kept up, with 406 yards passing and three touchdowns, but his Hail Mary as time expired fell incomplete in the end zone.

Chaos reigns in the N.F.C. East. With the way things are going, this division may be decided by a game of rock paper scissors. The Cowboys went to Washington with a chance of improving to 3-4, which would have put them ahead of 2-4-1 Philadelphia for the division lead. Instead, Dallas fell behind Washington early, lost Andy Dalton to a head injury — forcing its little-known third-stringer, Ben DiNucci, to finish the game — and got blown out, 25-3. Kyle Allen (194 yards passing, two touchdowns) and Antonio Gibson (128 yards rushing, one touchdown) had great games for Washington, and just to emphasize how rough things have been in the N.F.L.’s worst division, the team with the worst record in the N.F.C. West — San Francisco — would have a commanding lead in the East. 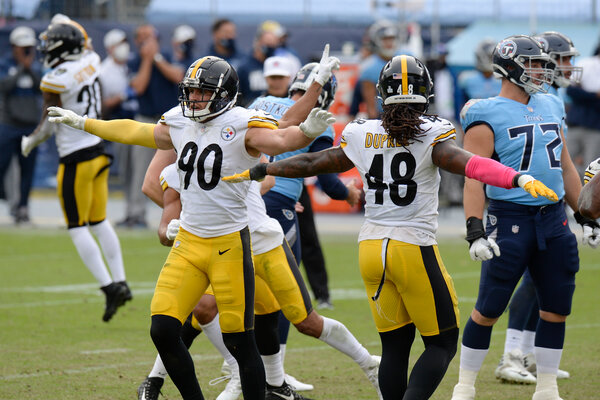 An immovable object beats an unstoppable force — barely. In a game of unbeaten teams, Pittsburgh got off to a 27-7 start — effectively knocking Derrick Henry out of the game — yet watched the game turn into a 27-24 nail-biter. The Titans’ rebirth came courtesy of three interceptions, the last of which came with less than three minutes remaining and the Steelers clinging to a 3-point lead. But the Titans, who started the season with three consecutive games decided by the leg of Stephen Gostkowski, had that magic run out. His 45-yard attempt to tie the game with 19 seconds remaining sailed wide right, leaving Pittsburgh (6-0) as the A.F.C.’s last unbeaten team.

Kansas City can win a game without much help from its offense. Playing in snowy conditions in Denver, the Chiefs were nowhere near their best when they had the ball. Patrick Mahomes threw for 200 yards and one touchdown, Clyde Edwards-Helaire and Le’Veon Bell were both held to fewer than 50 yards rushing and Kansas City went 0 for 8 on third down conversion attempts. But Daniel Sorensen contributed a pick-six, Byron Pringle had a 102-yard kickoff return and the Chiefs demolished the Broncos, who had dramatic advantages in total yards and tim5e of possession.

It is time for the Bills to worry. Sounding an alarm for a team that won on the road to improve to 5-2 doesn’t seem very friendly, but the fact that Buffalo couldn’t score a single touchdown against the Jets — getting all of its points on field goals in an 18-10 win — continued a downward trajectory for a once-promising offense. The Bills averaged 30.75 points a game during a 4-0 start, but have not topped 18 points since. They will need far more than that if they want to beat a team more formidable than the 0-7 Jets.

Atlanta can always find a new way to lose. The Falcons were trailing Detroit by 6 in the game’s final two minutes when Atlanta’s Todd Gurley II broke free for an easy 10-yard touchdown. Aware of the amount of time remaining, Gurley tried to fall down at the 1-yard line, in hopes of giving his team a chance to run down the clock. Unfortunately, he misjudged the distance, barely breaking the plane of the end zone for a go-ahead touchdown. That mistake gave the Lions 1 minute 4 seconds to go 75 yards, and they did just that, with Matthew Stafford hitting tight end T.J. Hockenson for an 11-yard touchdown as time expired in Detroit’s 23-22 victory.

Every. Yard. Counts. In his return to New Orleans after signing with Carolina in the off-season, Teddy Bridgewater of the Panthers kept things far closer than most predicted. He threw for 254 yards and two touchdowns and got some laughs by taking a brief break on the Saints’ bench, sitting down between his former teammates Drew Brees and Taysom Hill after being pushed out of bounds. But with Carolina trailing by 3 with just over two minutes to play, Bridgewater took an 8-yard sack, which essentially decided the game. With Carolina forced back to the Saints’ 47-yard line, the team sent out Joey Slye for what would have been an N.F.L.-record 65-yard field goal in hopes of tying the game. Slye’s kick was true, but it fell less than a yard short of the crossbar, handing New Orleans a 27-24 win.

One* Sentence About Sunday’s Games

*Except when it takes more.

Steelers 27, Titans 24 Tennessee’s beleaguered defense snagged three interceptions, making the game far closer than it should have been, but Pittsburgh had to be happy to see James Conner (20 carries, 82 yards) outgain Derrick Henry (20 carries, 75 yards).

Chiefs 43, Broncos 16 Despite a performance that fell well below his typical standards, Patrick Mahomes still extended his streak to 17 consecutive regular-season games with a touchdown pass.

Browns 37, Bengals 34 The Browns’ Rashard Higgins came into the day with five catches this season, but after Odell Beckham Jr. was lost to a knee injury, Higgins stepped up in a big way, with six catches for a career-high 110 yards.

49ers 33, Patriots 6 Jimmy Garoppolo wasn’t perfect against his former team, but Patriots Coach Bill Belichick had to be a little jealous watching his former pupil complete 20 of 25 passes for 277 yards in a blowout, as Cam Newton and Jarrett Stidham combined for 147 yards passing and four interceptions.

Packers 35, Texans 20 Deshaun Watson had a nice second half, and made his team look respectable, but Aaron Rodgers seemed to be making a point by putting together a passer rating (132.4) that was nearly 100 points higher than what he managed last week (35.4).

Saints 27, Panthers 24 This game was surprisingly close considering New Orleans completed 12 of its 14 third-down attempts, and got field goals from Wil Lutz after the team’s only two failures.

Bills 18, Jets 10 Sam Darnold came back from a shoulder injury, but after he barely completed 50 percent of his passes (12 of 23), threw two interceptions and was sacked six times, he might be wondering why he didn’t take another week to heal.

Chargers 39, Jaguars 29 Justin Herbert got his first career win, and he did it in a big way by throwing for 347 yards and three touchdowns while also running in a score. Herbert has thrown for at least 250 yards in each of his first five starts, a feat previously only accomplished by Patrick Mahomes, who did it in his first 10.

Lions 23, Falcons 22 Detroit didn’t get much production out of its running backs, but Matthew Stafford threw for 340 yards and a touchdown and the Lions won for the third time in four games. This was the 36th game-winning drive of Stafford’s career, according to Pro Football Reference, which trails only Drew Brees (37) since 2009.

Footballers 25, Cowboys 3 Ezekiel Elliott was held to just 45 yards rushing, fumbled once, had a ball bounce off him for an interception and made mistakes in pass protection. Blame the team’s struggles on Dallas’s second- and third-string quarterbacks all you want, but Elliott isn’t getting the job done.