Favored teams did well on Sunday, with the Kansas City Chiefs beating the New Orleans Saints, the A.F.C. South heavyweights both winning and the Tampa Bay Buccaneers starting slowly before racing back for a surprising road win over Atlanta. But the previously winless Jets pulled off the upset of the season by beating the heavily favored Los Angeles Rams.

Here’s what we learned:

A Derrick Henry stiff arm sounds even scarier than it looks. Henry is known for turning the stiff arm into a work of art, but he took it up a notch in the Tennessee Titans’ laughable 46-25 victory over the Detroit Lions. On a 7-yard run early in the second quarter, Henry was heading toward the left sideline when Alex Myres, a second-year cornerback, tried to wrap up the much larger running back. Henry thrust his right hand at Myres’s head, producing a thundering slap that sent Myres tumbling to the ground.

It was one of numerous highlights for Henry on Sunday, as he rushed for 147 yards and scored his 15th rushing touchdown of the season. Henry is up to a career-high 1,679 yards rushing, putting him 195 ahead of Minnesota’s Dalvin Cook for the N.F.L. lead. Henry could become the first player with consecutive rushing titles since the Hall of Famer LaDainian Tomlinson did it in 2006 and 2007. 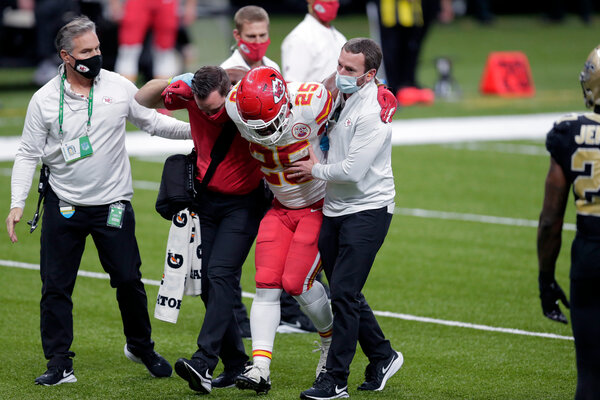 A huge win can come with an even bigger loss. In what was potentially a Super Bowl preview, the Kansas City Chiefs beat the New Orleans Saints, 32-29, improving to an N.F.L.-best 13-1 and retaining the top spot in the A.F.C. playoff race. But toward the end of the game, Kansas City running back Clyde Edwards-Helaire — a rookie first-round pick out of Louisiana State who immediately stepped in as a vital part of Kansas City’s offense this season — had his left leg get trapped under him and had to be carried off the field with what appeared to be a serious injury to his leg and hip. The extent of Edwards-Helaire’s injury has yet to be announced, but the team said initial X-rays were negative and that he would continue to be evaluated.

Xavien Howard is a takeaway. He has tough competition, but Miami’s Howard should get a great deal of consideration for the N.F.L.’s Defensive Player of the Year Award. Howard, a 27-year-old cornerback, forced a fumble in Miami’s 22-12 victory over New England, while also having a fumble recovery for a touchdown called back because another player had stepped out of bounds before touching the ball. With nine interceptions this season, plus Sunday’s forced fumble, Howard has produced a takeaway in 10 of Miami’s 14 games. He is a huge reason the Dolphins have shocked the N.F.L. with a record of 9-5. And Sunday’s win came with the bonus that it eliminated the Patriots from playoff contention.

Howard’s competition for defensive player of the year includes Aaron Donald of the Rams — a two-time winner — and T.J. Watt of the Steelers. But Howard’s case would get a huge exclamation point with one more interception, as he would be the first player since 2007 to have 10 in a season.

You have to watch until the end of every Texans-Colts game. Even in a down season for Houston, the A.F.C. South rivalry between the Texans and the Indianapolis Colts has provided two extremely memorable games. Two weeks ago, Houston appeared to be on the verge of taking the lead in the final two minutes when a bad snap led to a fumble and allowed Indianapolis to run out the clock. Sunday’s game was just as wild, with the Colts, clinging to a 27-20 lead in the fourth quarter before allowing the Texans to get into the red zone. Texans quarterback Deshaun Watson connected with Keke Coutee, who stretched forward at the Colts’ 2-yard line only to fumble the ball away, handing yet another win to Indianapolis.

The victory allowed the Colts to keep pace with Tennessee in the A.F.C. South. It was the 14th consecutive regular-season game between Indianapolis and Houston that was decided by 9 or fewer points.

Dez Bryant wasn’t done. In Baltimore’s emphatic 40-14 win over Jacksonville, one of Lamar Jackson’s three touchdown passes went to Bryant, a 32-year-old wide receiver whose N.F.L. career appeared to be over several times in the past. It had been 1,106 days since Bryant’s last touchdown, 982 days since he was released by Dallas, 772 days since he tore his Achilles’ tendon in a practice for New Orleans and 12 days since he appeared to announce his season was over on Twitter shortly after being pulled off the field during warm-ups because of a positive test for the coronavirus.

Bryant has just five receptions this season, but that is five more than just about anyone expected him to get.

The Buccaneers can dig out of a hole. Tampa Bay has had a problem with slow starts all season, being outscored by 32 points in first quarters. That sluggishness was taken to an extreme on Sunday when the Buccaneers went into halftime trailing Atlanta, 17-0, having gained just 60 total yards. Tampa Bay proceeded to have its players wake up on both sides of the ball, producing 356 second-half yards and walking away with a 31-27 win on the road thanks to Tom Brady’s go-ahead, 46-yard touchdown pass to Antonio Brown in the fourth quarter. Atlanta had two more chances to regain the lead, but Tampa Bay’s defense locked in, forcing a punt and a turnover on downs.

The Jets can’t even tank right. With a touchdown pass by Sam Darnold, a rushing touchdown by the ageless Frank Gore — the 100th touchdown of Gore’s career — and three field goals from Sam Ficken, the Jets delivered the biggest upset of the season, beating the Los Angeles Rams, 23-20, after coming in as 17-point underdogs. Avoiding a winless season is surely a relief for the Jets’ players, but the victory, combined with Jacksonville’s 13th straight loss, has the Jaguars in line for the No. 1 pick in the 2021 draft with two games remaining for both teams.

There is a reason Tennessee made Tannehill its off-season priority. The veteran quarterback put on a show in a blowout win over the Detroit Lions, completing 21 of 27 passes for 273 yards and three touchdowns. He also ran in two touchdowns, absolutely pouring it on during a dominant fourth quarter that made the game laughable. It was Tennessee’s fifth straight game with at least 420 yards of total offense and 30 points. “We want to keep our foot on the gas,” Tannehill said.

Tennessee’s Derrick Henry and Minnesota’s Dalvin Cook have been the N.F.L.’s best running backs this season, and both played well on Sunday, yet it was Chicago’s Montgomery that had the biggest day, willing his team to a huge win over Cook’s Vikings. Montgomery rushed for a career-high 146 yards in Chicago’s 33-27 win, scoring a pair of touchdowns. He has had more than 100 yards in three of the Bears’ four games since their Week 11 bye. “It’s been fun, man, being able to go out there and just let it loose,” Montgomery said.

Hopkins had numerous highlights, including a 45-yard reception, but it was a 20-yard go-ahead touchdown catch that left everyone wondering how exactly a team can defend the superstar wide receiver. Philadelphia’s Michael Jacquet made an excellent attempt to break up the pass, but Hopkins simply reached over him, pulled the ball in and then held on one-handed as he fell back into the end zone.

One* Sentence About Sunday’s Games

*Except when it takes more.

Chiefs 32, Saints 29 Neither Patrick Mahomes nor Drew Brees looked their best in this one, but Mahomes’s three touchdown passes and a Le’Veon Bell rushing touchdown put Kansas City up by enough that New Orleans’ late comeback attempt proved fruitless.

Colts 27, Texans 20 Indianapolis led, 14-0, in the first quarter before this became a close game. Houston put up a strong fight, but Philip Rivers’s 5-yard touchdown pass with 1 minute 47 seconds remaining proved to be enough, barely.

Titans 46, Lions 25 Tennessee was leading by only 24-18 after three quarters, but things got ridiculous from there, with Ryan Tannehill throwing two fourth-quarter touchdown passes in addition to scoring a 3-yard rushing touchdown — his second rushing touchdown of the game. The Titans lead Indianapolis in the A.F.C. South thanks to their superior record in division games.

Jets 23, Rams 20 It has been a horrible season for the Jets, but on this day they took care of business on offense, produced a takeaway on defense, and then held on for dear life in a game that seemed like it could slip away at any second.

Buccaneers 31, Falcons 27 The stakes were not close to what they were in Tom Brady’s last huge comeback win over Atlanta — the Falcons’ collapse after leading Brady’s Patriots by 28-3 in the Super Bowl of the 2016 season is hard to top — but you’d have to imagine the Falcons, who led Tampa Bay on Sunday by 17-0 and 24-7 before losing, are looking forward to Brady retiring someday.

Ravens 40, Jaguars 14 It is presumably OK to stop worrying about Baltimore’s offense after it led the team to a third consecutive win, with Lamar Jackson throwing three touchdown passes and running in another during a game that was decided by halftime.

Dolphins 22, Patriots 12 Led by running backs Salvon Ahmed and Matt Breida, Miami rumbled for 250 yards rushing and three rushing touchdowns. The Dolphins are in line for the A.F.C.’s final wild-card spot — thanks to a tiebreaker over Baltimore — and have clinched a winning season for just the second time since 2008.

Seahawks 20, Footballers 15 Washington came surprisingly close to rallying from a 20-3 deficit, but the Seahawks’ much-maligned defense forced a turnover on downs in the final minute that gave Seattle a win and clinched a playoff spot.

Bears 33, Vikings 27 Minnesota was playing at home, got 132 yards rushing from Dalvin Cook and 104 yards receiving from Justin Jefferson, and still lost. Credit Chicago all you want, but the Vikings’ defense needs a lot of work.

Cardinals 33, Eagles 26 Jalen Hurts and Kyler Murray were back-to-back Heisman Trophy finalists at Oklahoma — Murray won the award in 2018 — and they showed off how well their skills translate to the N.F.L. on Sunday. Philadelphia’s Hurts threw for 338 yards, Arizona’s Murray threw for 406, both of them threw three touchdown passes and both of them also ran in a score. But Murray’s Cardinals came out on top thanks to a late defensive stand.

Browns 20, Giants 6 A team shouldn’t get all that excited about beating the Giants when Daniel Jones is injured, but Cleveland improved to 10-4, reaching double-digits in wins for just the second time since the team was resurrected in 1999 and only the third time since 1989 should you include the before times.

Cowboys 41, 49ers 33 Running back Ezekiel Elliott missed a game because of injury for the first time in his career, and he watched his backup, Tony Pollard, put up a strong performance: 132 yards from scrimmage and two touchdowns. Elliott hasn’t had 130 yards from scrimmage in a game since Week 15 of last season.