The first five days of the N.C.A.A. men’s basketball tournament in Indiana were filled with upsets and thrilling endings that busted many brackets across the nation. The last perfect bracket was shattered when Maryland knocked off UConn in the first round on Saturday, according to the N.C.A.A.

As the tournament moves toward the Sweet 16 on Saturday and the start of the Elite Eight on Monday, here’s what we have learned so far:

Gonzaga is every bit as potent as advertised.

Gonzaga, the top seed over all, averaged 92.5 points in its two games — a 43-point win over Norfolk State and a 16-point win over Oklahoma — as it advanced to the round of 16 for the sixth consecutive season under Coach Mark Few.

Gonzaga will next face No. 5-seeded Creighton, which beat No. 13-seeded Ohio, 72-58, on Monday. But whoever the Bulldogs meet the rest of the way will have their hands full with Gonzaga’s high-octane offense. In wins this season over ranked opponents — Kansas, Iowa, West Virginia and Virginia — the Bulldogs averaged 96.5 points while allowing an average of just under 84.

“They’re a special team, no question about that,” Oklahoma Coach Lon Kruger said after his team lost, 87-71, on Monday. “Baylor is a special team. But those two, through the course of the year, have separated themselves, I think deservedly so.

“Would be an interesting final game if it turns out that way, for sure.”

Drew Timme, who scored 30 points against Oklahoma, and the Bulldogs are on a mission and don’t want to be tripped up like Illinois, Iowa and Ohio State, all of which did not make it to the second weekend of the tournament.

“We’ve got a lot of things we can work on,” he said. “We’re not satisfied with this. This is not the end goal. We’re excited for the next challenge that presents itself.”

After a strong season, the Big Ten has stumbled in a colossal way. 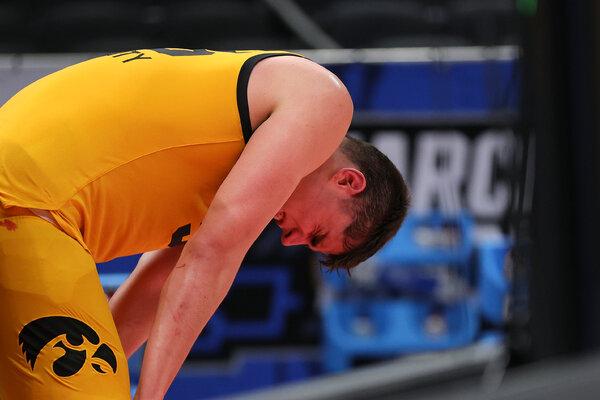 Coming into the tournament, there were high hopes for the Big Ten to have several teams make deep runs as the conference looked to win its first N.C.A.A. championship since Michigan State triumphed in 2000. The Big Ten had nine schools in the 68-team field, including two No. 1 seeds in Illinois and Michigan, and two No. 2 seeds in Iowa and Ohio State. But after the second round, only Michigan remained. The Wolverines beat Louisiana State, 86-78, on Monday, but No. 10-seeded Maryland lost, 96-77, to Alabama.

Michigan State lost a First Four game to U.C.L.A. on Thursday, and Ohio State was upset by No. 15 Oral Roberts the next day. On Sunday, Illinois was outplayed by No. 8-seeded Loyola-Chicago, with 101-year-old Sister Jean Dolores Schmidt looking on from the stands.

The Big Ten’s woes continued on Monday when Oregon ran Iowa out of the gym in what proved to be the last college game for Luka Garza, who has won two Big Ten Player of the Year Awards and remains a finalist for the Naismith Trophy as the nation’s top college player.

The Pac-12 is coming on strong at the right time.

Nobody thought much of the Pac-12 coming into the tournament. The so-called conference of champions didn’t have a team ranked in the top 20 of the latest Associated Press poll, but through Monday the league’s five teams in the tournament were 9-1. Colorado took the Pac-12’s only loss, 71-53, to Florida State on Monday night.

Oregon State, the Pac-12 tournament champion, outplayed Oklahoma State and the projected No. 1 N.B.A. draft pick Cade Cunningham, 80-70, on Sunday night. U.C.L.A., which lost four straight games before the tournament, has now beaten Michigan State, Brigham Young and Abilene Christian to become the fifth team to advance to the round of 16 from the First Four.

No. 6-seeded Southern California joined the round of 16 by beating third-seeded Kansas, 85-51, on Monday night, with Evan and Isaiah Mobley combining for 27 points.

The coronavirus has taken its toll, but it could have been worse.

Virginia Commonwealth became the first team forced to drop out because of coronavirus issues, a brutal end to the season for the players who dreamed of getting to the tournament. Coach Mike Rhoades called the outcome devastating and said that “there were no dry eyes.”

“We’ve lost two basketball games to this,” he said, referring to the cancellation of the tournament last year.

“Five hundred thousand people have lost their lives,” he added, referring to the death toll from Covid-19 in the United States.

Virginia, Kansas, Oklahoma and Georgia Tech also dealt with positive coronavirus tests. Virginia didn’t lose any players, but after not playing for nine days the Caveliers lost to a 13th-seeded Ohio team led by guard Jason Preston in the first round.

Georgia Tech lost its first-round game to Loyola-Chicago while playing without Moses Wright, the Atlantic Coast Conference player of the year, who had tested positive. Oklahoma won its first game without the star guard De’Vion Harmon, then lost to Gonzaga. Kansas defeated Eastern Washington in the first round despite playing without Jalen Wilson, its leading rebounder, and the reserve guard Tristan Enaruna.

Cinderella stories serve as a reminder of why this tournament is so great.

Because the tournament was canceled last year because of the pandemic, it had been two years since anyone enjoyed March Madness. Fans were immediately reminded why this event is considered by some to be the best on the sports calendar. Nine double-digit seeds advanced to the second round, including a No. 15 in Oral Roberts, a No. 14 in Abilene Christian and two No. 13s in Ohio and North Texas.

U.C.L.A. and Syracuse, both No. 11 seeds, advanced to the Sweet 16. The Orange have now won nine games across three tournaments as a double-digit seed.

Mighty Texas, coming off winning the Big 12 tournament, lost to Abilene Christian, a Southland Conference program that had never won a game in the N.C.A.A. tournament and had been playing at the Division I level for only eight years after a mediocre Division II history.

“We were the worst D-I team in the country, and we just beat the University of Texas,” Wildcats Coach Joe Golding said.

The losers had to confront the stark reality of a sudden end to the season — and, for some, their careers.

Transfers are playing a key role for many teams.

Kentucky and Duke — and their bushel full of one-and-done prospects — are at home watching the tournament, the first time since 1976 that both schools missed the event. While both teams acutely felt the effects of having young rosters navigating an untraditional preseason, older, more experienced teams are carrying the day in March. And in many cases, transfers have played a key role.

Oregon State’s Maurice Calloo, who transferred from Oklahoma State, scored 15 points in a win over his former team. The Kentucky transfer Johnny Juzang has excelled at U.C.L.A., averaging 22.3 points in three wins.