Liberty Coach Walt Hopkins and his staff reviewed last season’s film looking for answers beyond the box scores and advanced analytics. Why was their defensive rating so low? Who was getting burned on screens? It was a trying year for a first-year head coach and his team, which ended with the second-worst winning percentage in W.N.B.A. history and a 2-20 record.

The Liberty were young and inexperienced, playing as many as six rookies. Sabrina Ionescu, the 2020 No. 1 overall pick, severely sprained her ankle in her third game and missed the rest of the season. Key contributors such as Rebecca Allen, Marine Johannes and Asia Durr opted out of playing.

Wins weren’t everything for a franchise rebuilding without Tina Charles, the 6-foot-4 center who had led the team in scoring every season since 2014. The Liberty made strides reinventing their style of play. On offense, the focus was on spacing and 3-point shooting. On defense, players were instructed not to over-help on picks. The Liberty shot 41.5 percent of their field goals from 3-point range, the most in W.N.B.A. history, after shooting 28.2 percent of them from there the year before.

While expectations were tempered then, the franchise will introduce four veterans new to the team in its debut season at Barclays Center in Brooklyn.

Here’s what you need to know: 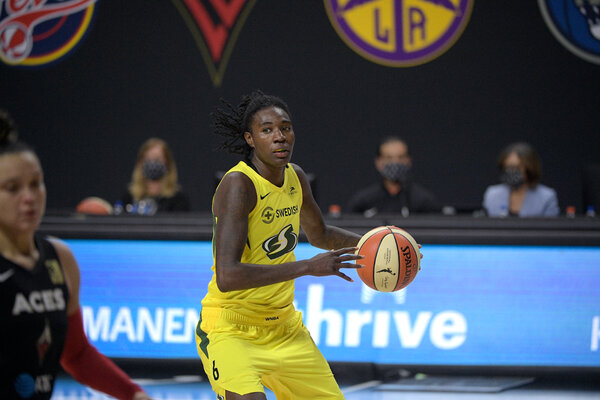 The Liberty tried to speed up their rebuild by trading the 2021 No. 1 pick, a 2022 first-round pick from the Phoenix Mercury and their own 2022 second-round pick to the Seattle Storm to acquire Natasha Howard. A 6-2 forward, Howard is a three-time W.N.B.A. champion and was a starter during the Storm’s 2018 and 2020 title runs, but her career year was 2019.

With Sue Bird and Breanna Stewart sidelined with injuries, Howard, alongside guard Jewell Loyd, carried Seattle while notching career highs across the board. She averaged 18.1 points, 8.2 rebounds, 2.1 assists and 2.2 steals a game and won the Defensive Player of the Year Award after blocking 1.7 shots per game. She has proved she can lead a team. With the Liberty, she will have that opportunity again.

All eyes will be on Ionescu, the 5-11 University of Oregon sensation. She will run a free-flowing offense designed around her passing ability and shooting range.

In 80 total minutes before her injury, Ionescu scored 55 points on 19-of-42 shooting, including a highlight-filled 33-point game in which she sank six 3-pointers and had seven assists and seven rebounds. That was without running sets with a player as accomplished as Howard. How will teams guard their quickness and savvy in a pick-and-roll?

“I don’t know,” the Liberty assistant coach Jacki Gemelos said. “How does one guard a pick-and-roll with other duos in the league like Chelsea Gray and Candace Parker, or whoever? You just kind of got to cross your fingers and: ‘Let’s hope they just don’t score this play. Let’s try and get the ball out of their hands.’ It’s going to be scary. And again, as a spectator, as a coach, I’m looking forward to it as well.”

Betnijah Laney was the Liberty’s biggest free-agent signing of the off-season, which is an improbable designation for someone cut by the Indiana Fever eight months earlier.

Over 22 games with the Atlanta Dream last season, Laney more than tripled her scoring average from the previous season in just 7.7 additional minutes. She posted 17.2 points per game on 48.1 percent shooting from the field and 40.5 percent shooting from 3-point range. She won the Most Improved Player of the Year Award and earned all-defensive first team honors.

“I think Betnijah’s whole setup is going to be just so different from Atlanta,” Gemelos said. “I think she’s going to have more people setting her up. It’s going to make things a lot easier for her.”

Gemelos was Laney’s teammate with the Chicago Sky in 2015.

“To see how her game has developed from then until now, it’s just scary,” Gemelos said. “She’s just one of those players who can play multiple positions. She’s fearless offensively and defensively. I would let her guard anyone in the league, and I’d be completely confident that she’s going to get the job done.”

Forward Michaela Onyenwere, the No. 6 pick in this year’s draft, should find a place in the Liberty’s rotation. At U.C.L.A., she had 19.1 points and 7.2 rebounds a game in her senior season. She has the shooting touch to contribute from distance and the strength to get to the rim. If she can relieve Laney as a defensive stalwart who crashes the boards and stretches the floor, she’ll make a considerable first-year impact.

Kia Nurse, Amanda Zahui B. and the No. 1 pick

Two Liberty mainstays won’t be at Barclays. Kia Nurse was traded to the Mercury, and Amanda Zahui B., who spent five years with the Liberty at center, signed with the Los Angeles Sparks in free agency.

Nurse showed promise in a breakout sophomore campaign that included an All-Star selection. Zahui B. started 20 of the team’s 22 games last season, averaging career highs in points (9) and rebounds (8.5).

The roster is much improved.

It’s reasonable for fans to doubt the franchise with the worst record last season will be able to rebound quickly, but the roster has drastically improved.

Sami Whitcomb, a two-time champion with the Storm who was part of the Howard trade, is solid from 3 (38.1 percent last season). Even better is Rebecca Allen, who made 42.6 percent of her 3-pointers in 2019 and is back after opting out last season. Plus, Jazmine Jones, who was named to the all-rookie first team last season, can build off her stellar campaign. She averaged 10.8 points a game off the bench.

Laney is confident that the inclusion of new veterans will make a difference.

“We’re hungry,” she said, adding, “We’re not going to back down and roll over for anyone.”

Can a franchise turn around this quickly?

Though a significant roster overhaul can be a good thing, it won’t be an easy transition. Hopkins will have to teach his system to different groups in waves. Howard, Allen and Kiah Stokes, for example, are latecomers because of overseas commitments.

The Liberty make the playoffs.

The Liberty aren’t likely to compete for a championship, but if Ionescu can play consistently at the level she showed in her 33-point game last season, Laney can keep shooting well and Howard can thrive as a go-to scorer the way she did in 2019, the Liberty can be in the playoff hunt.

Too many new pieces slow development, and the team returns to the W.N.B.A. basement.

With players arriving late, and so much change from last season’s group, maybe the transition into a 3-point-heavy offensive system won’t go to plan. Precision is everything, and despite shooting so many 3-pointers last season, the Liberty made a league-low 27.7 percent of their looks from distance. They also scored the fewest points per 100 possessions by a mile, finishing 11.7 points per 100 possessions below the next-worst team, Atlanta.

Ionescu for Rookie of the Year (Again)?

Hopkins isn’t trying to start a fire over the discussion, but if Ionescu plays to her potential, she won’t have the chance to win the Rookie of the Year Award despite playing just two full games and leaving her third with an ankle injury.

“She’s a rookie,” Hopkins said when asked. “I mean, she played two games and had to leave the bubble. She didn’t even get to spend the whole season with us. She’s by all accounts in her fourth week of being a W.N.B.A. player. Yeah, I feel strongly about that one. I don’t think it’s fair that she doesn’t get to be in contention.”

Hopkins added: “So she never gets to be in contention for rookie of the year? What experience did she get? I don’t believe she was going to be on people’s ballots last year after playing two games. I don’t think anybody would have thought that was reasonable. So why do we think it’s reasonable that she doesn’t get to play her rookie year now?”