Sporting Braga sent fans wild when they revealed their 2019-20 top – a bonkers jersey inspired by Ancient Roman soldiers that featured body armour emblazoned across it. 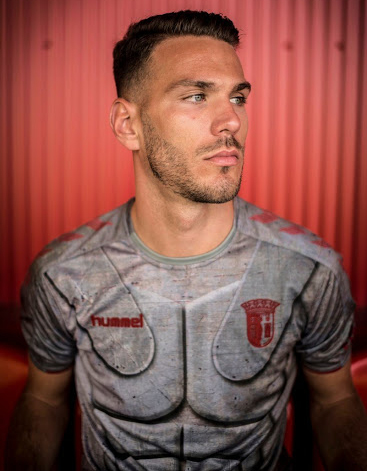 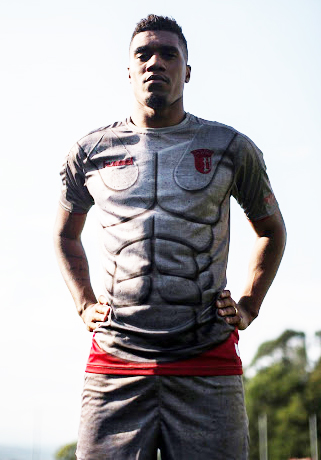 Opinions were divided upon its release, and rightly so.

But Braga aren't the only side who have committed a bizarre fashion crime when it comes to their jerseys.

Here's 12 more that'll have you covering your eyes in disgust!

German side 1860 Munich got into the spirit of Oktoberfest in 2018 when they launched a special kit with leather-look lederhosen shorts.

The wacky strip was debuted against third-tier club Wehen Wiesbaden last year, just in time for the beer festival.

You can't help think whoever designed it, might've had a few beers themselves beforehand. 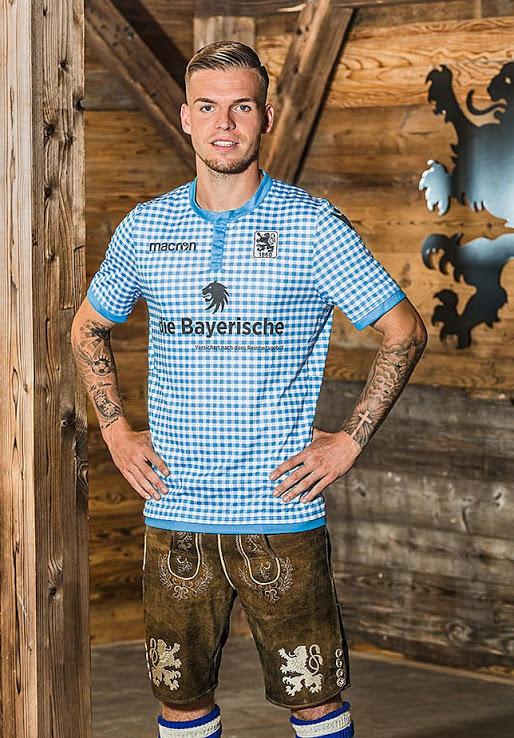 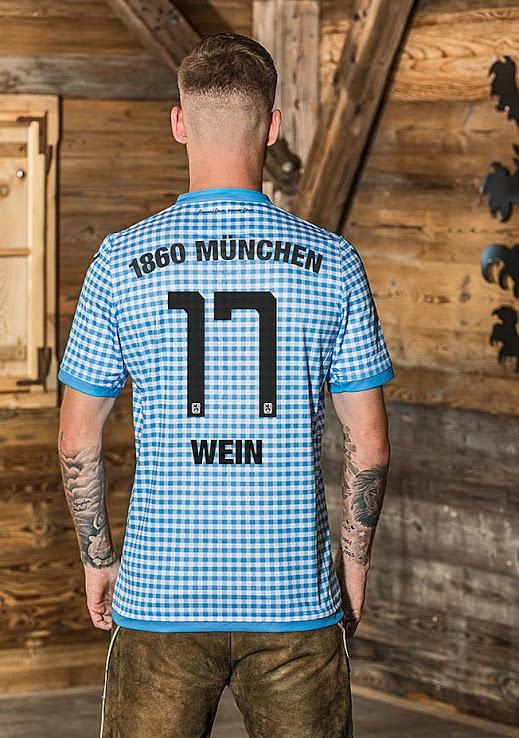 Spanish fourth division side Zamora CF’s third kit last season was certainly something we haven’t seen before – but there’s probably a reason for that.

The strip, produced by Kappa, is imprinted with a real circulatory system (we know) – with the team’s logo used in place of the human heart.

One of the most important details is stitched on the back of the shirt – a very clear message that's not just aimed at Zamora fans.

The phrase reads: “The blood, that reddish fluid that transports life through our body, which is born and flows from the heart to nourish our emotions and feelings.”

Worst kit ever? It's definitely up there. 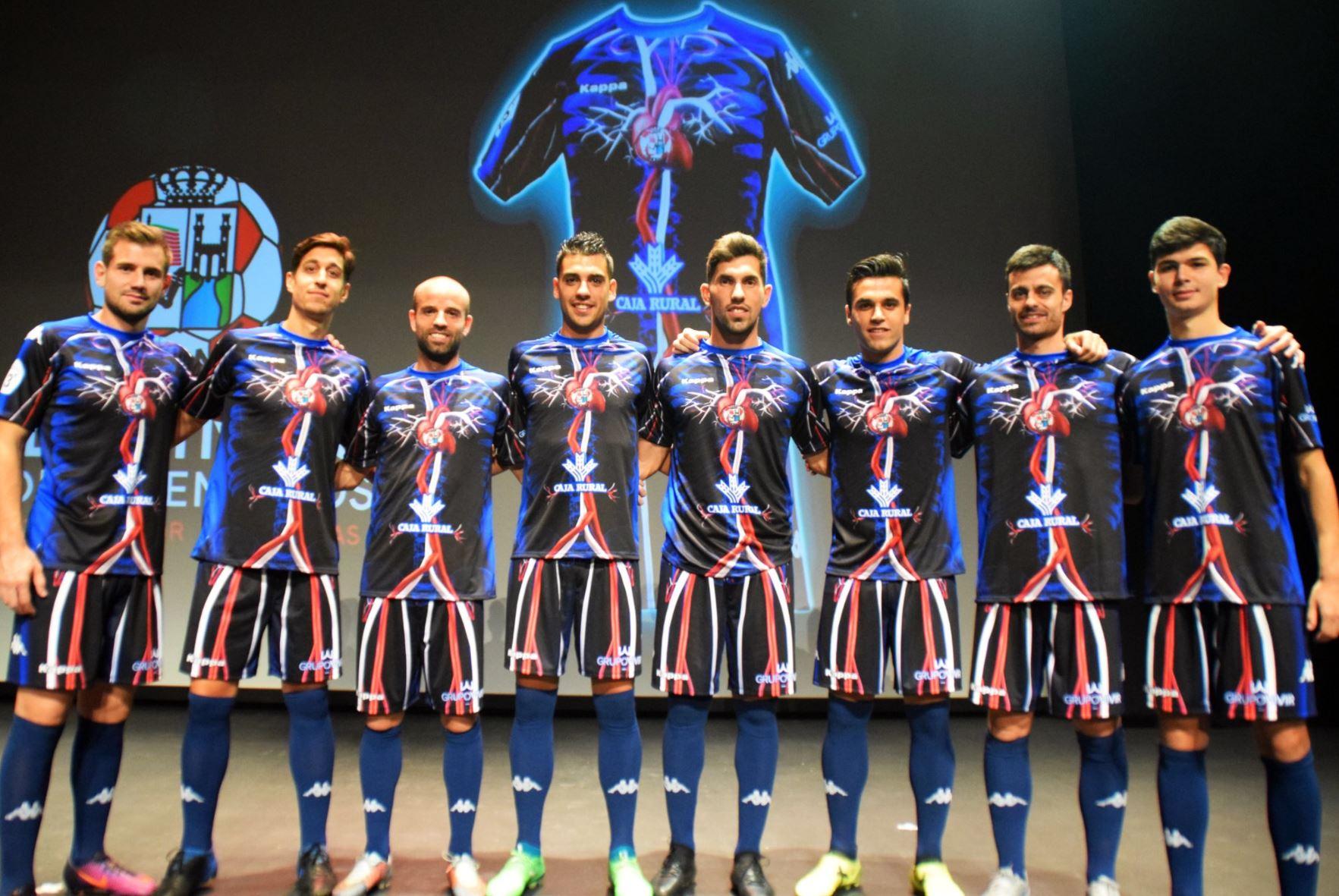 Is it any surprise that the team wearing this bizarre number racked up the worst record in the old NASL?

We're not sure what is worse, the collar, club crest (on the wrong side).

No, no, surely the leather-look tassley stuff across the chest is what sets it all off.

This ain't no Western cowboy-highwayman hold-up… it's merely a stitch-up. 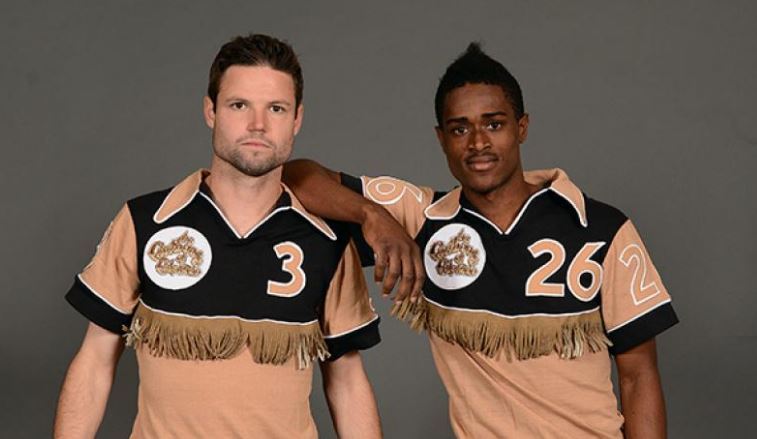 Well at least if you were frozen out at La Hoya Lorca, you would be bang on trend.

That is because their third kit during the 2013-14 season provided a backdrop of a set of peas.

Yes, peas. Like the ones you used to leave on your plate after a Sunday roast.

Word is they only did it to ap-peas their sponsors.

For their 150th anniversary, 1860 Munich were at it again and decided to produce a reversible kit.

On one side was a throwback to their original colours, while on the other was a collage of players, managers and owners past and present.

The problem was both sides were absolutely rubbish, and you certainly wouldn't want to represent your club wearing it. 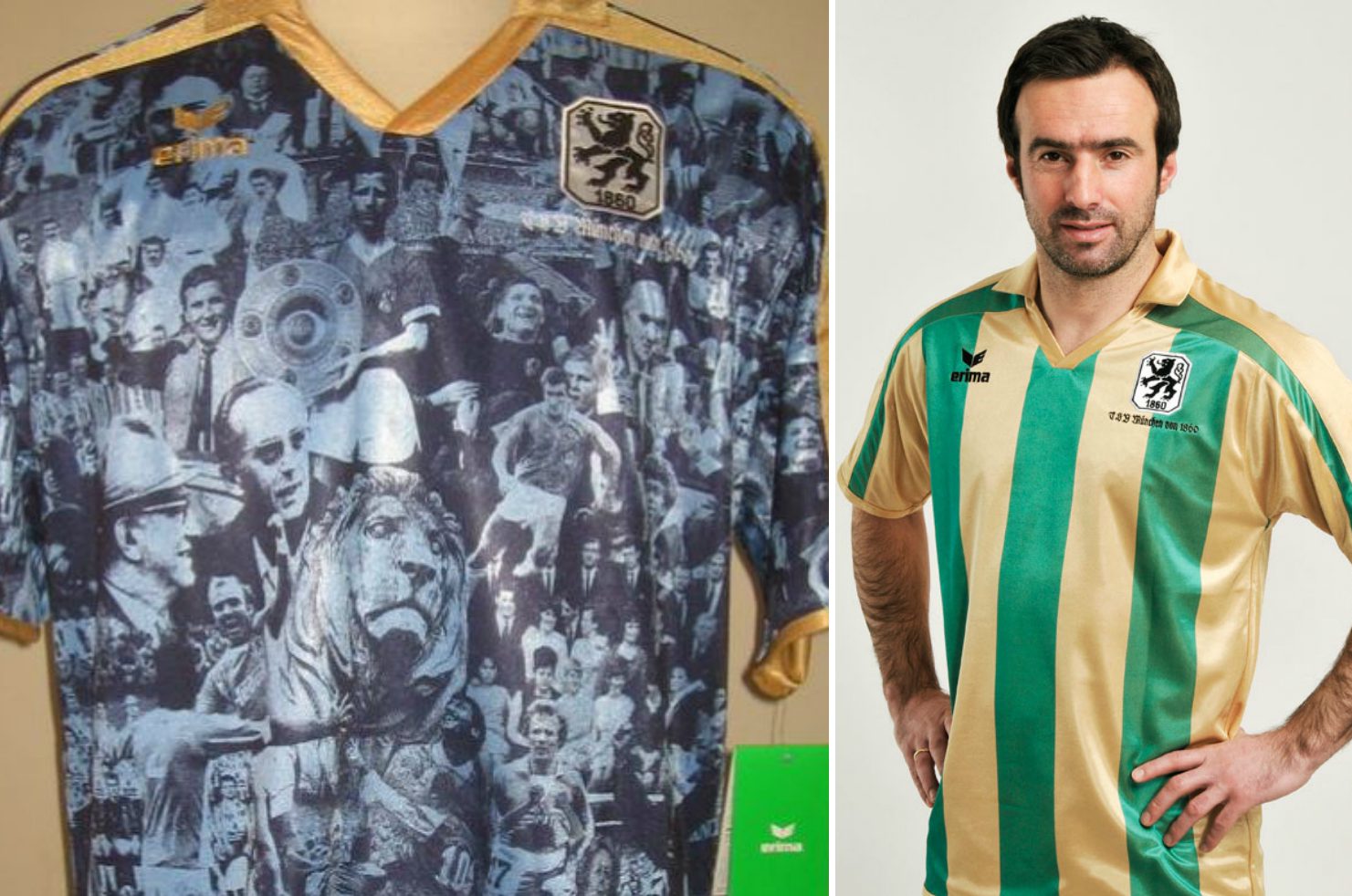 No wonder Fernando Torres decided to leave Atletico Madrid back in the noughties.

El Nino just could not put up with kits like this from Nike – with a spider's web design – obviously designed to promote the Spider-Man 2 movie.

Remember Kirsten Dunst and Tobey Maguire's upside-down kiss? Well this was the movie after that one.

The problem with this is, much like reigning LaLiga champs Atletico Madrid in recent years, the movies needed a complete revamp and were re-made a decade later.

And much like the old DVDs of this Spider Man franchise, there's only one place you'll be able to find this forgotten Atletico Madrid kit… on the web. 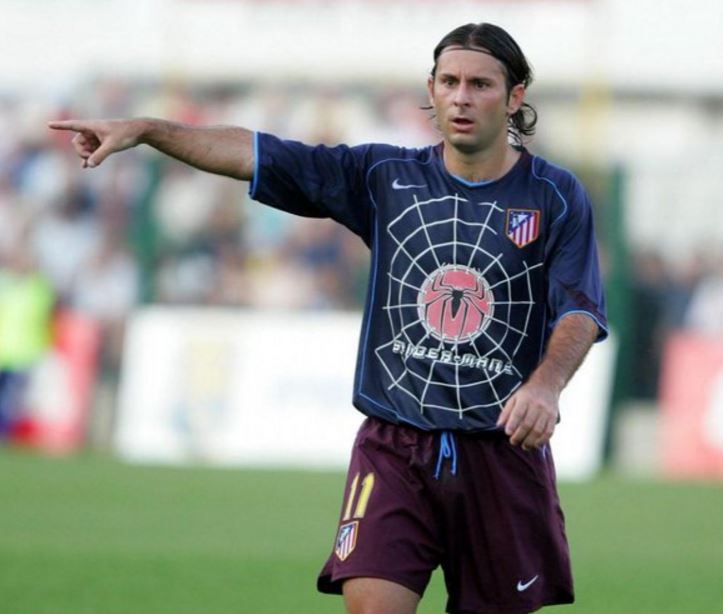 Back in the noughties (again), the Burger King – i.e. a bloke in a rubber mask and a crown – would be superimposed on to American adverts, intercept footballs and score touchdowns in various NFL-inspired ads.

It really was quite hilarious.

The problem was, that was a campaign almost exclusively aired in America – and not Europe – and we play a different kind of football.

So, when Burger King decided to print their King's face on to the reverse of a Getafe shirt so that you could do a 'Ravanelli' and see the rubber royal himself, we Europeans were a little perplexed.

Even more bizarre was that they had their best season ever in LaLiga and reached the semi-finals of the Copa del Rey – the 'Cup of Kings.' 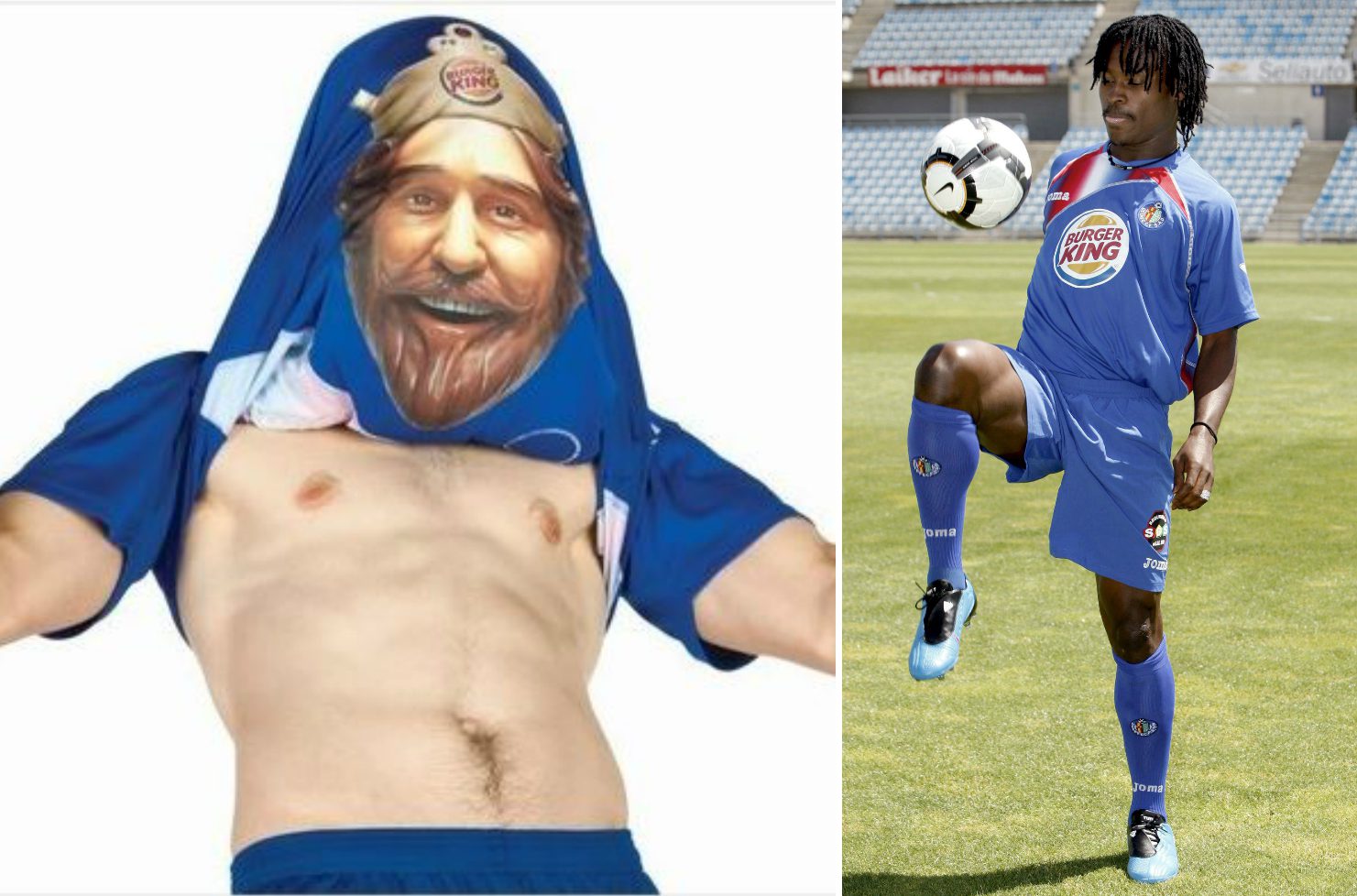 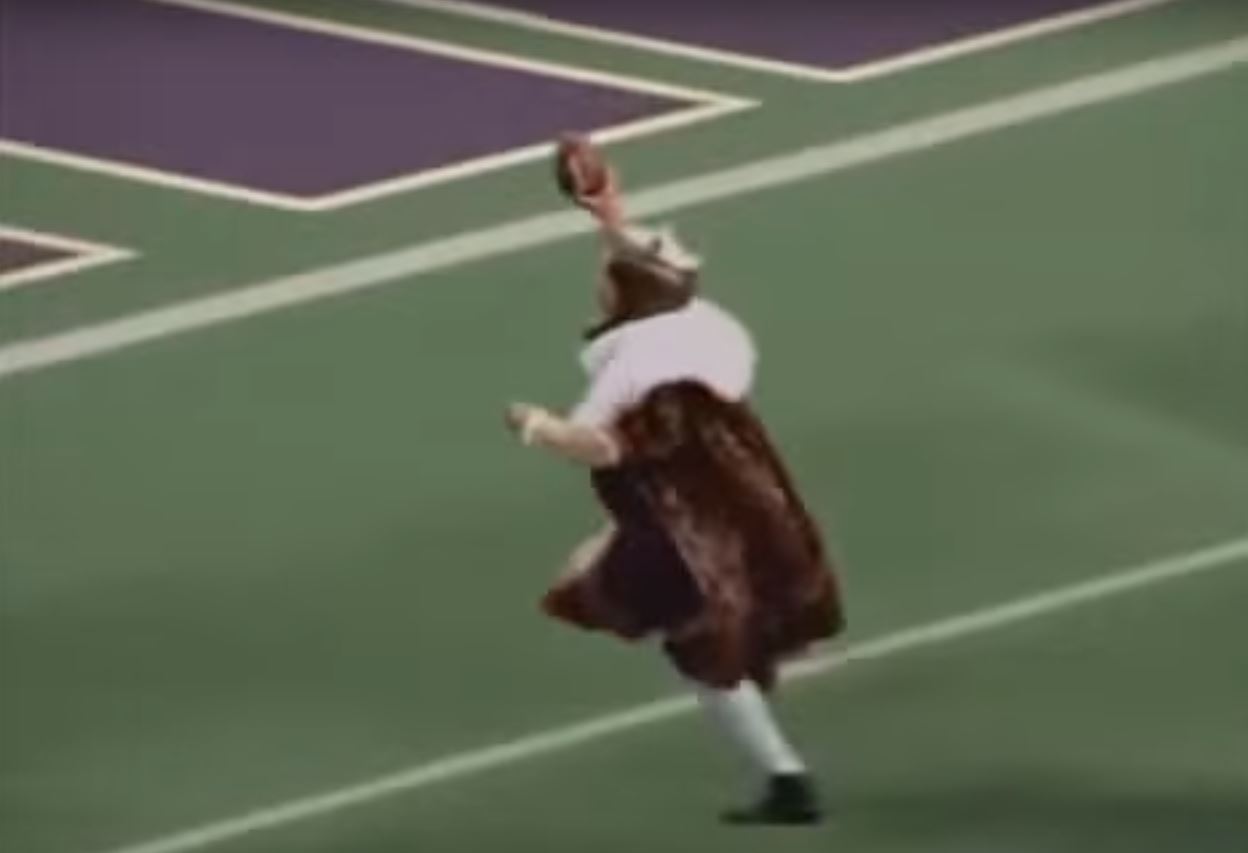 Who would have thought football could be fun and educational?

Well just ask Spanish (yes, them again) club Palencia, who have muscled in on the odd uniforms market.

It should make pre-season training a doddle, just eat what you want and you'll always have a six pack.

Pulled hamstring though? The club physio might have a few problems. 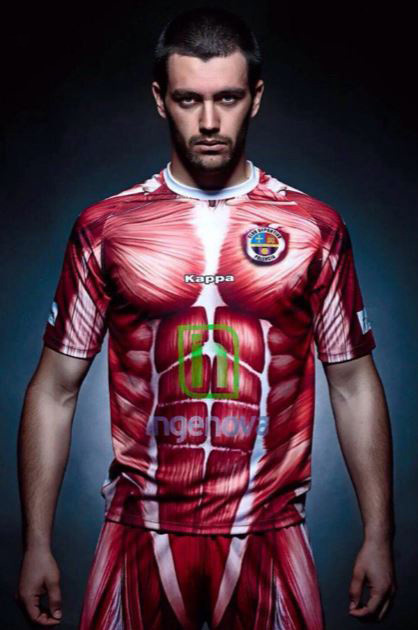 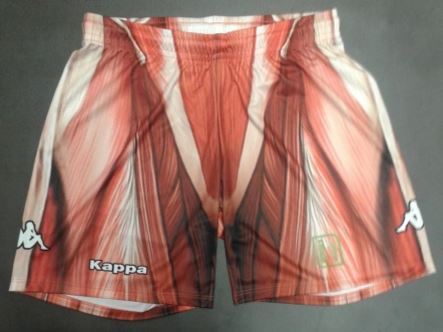 Have the Spaniards really not heard any Spanish waiter jokes?

Obviously not, as they sported these tuxedo-inspired jerseys for the 2014/15 season, complete with a fetching drawn on bow-tie.

Not sure what they were supposed to wear for the annual club awards bash, mind. 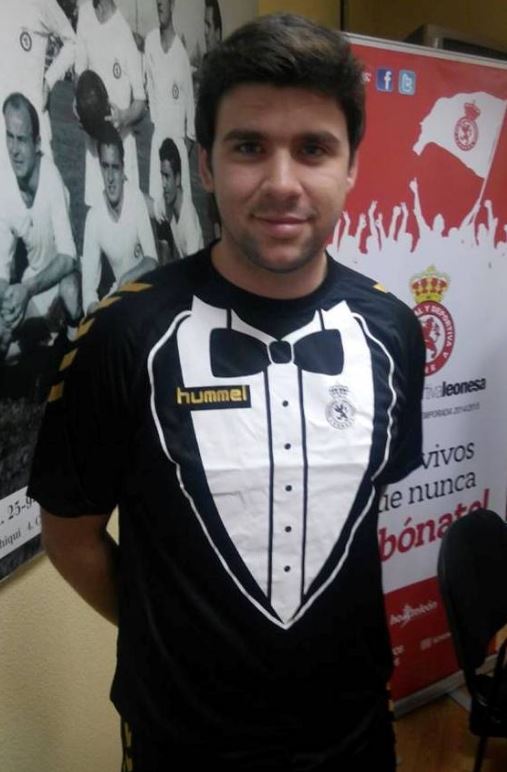 One was in 2002, when they decided to get their biceps out and wear sleeveless shirts – as they did in a friendly against England.

Sadly, the vest design was banned for the 2002 World Cup by Sepp Blatter.

So, after that they simply wore a tight-fitting under-layer underneath the Puma jerseys.

Then, two years later, Puma came up with an all-in-one uniform – which was just as baffling and was, again, banned. 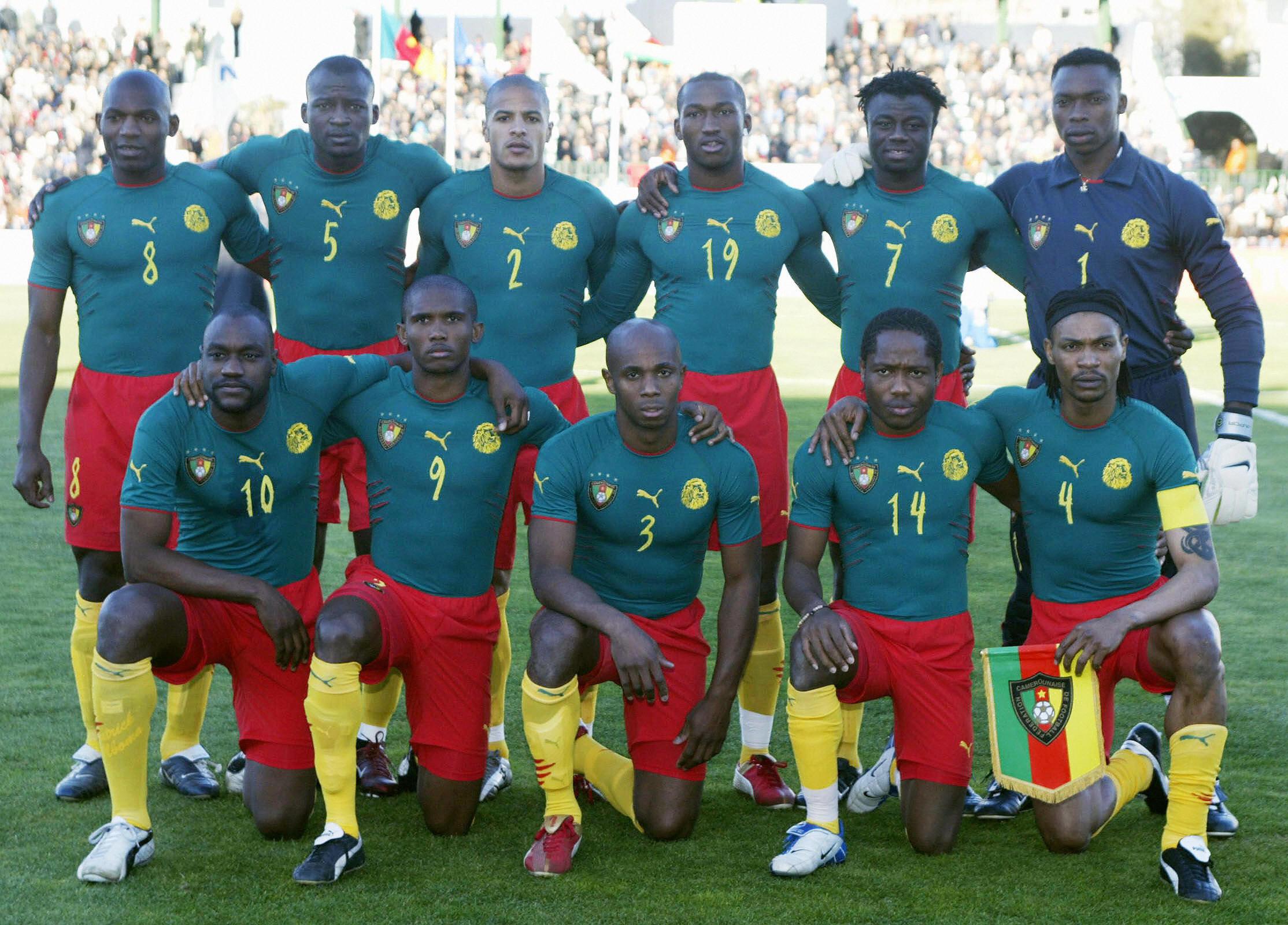 'Tiger, tiger, burning bright' as the saying once went.

In the 1992 season, Hull City went with a flamboyant tiger print jersey – they must've been ahead of their time in the fashion stakes with animal-print being in among the fashion set in today's world.

But on a football pitch, it just looked plain daft… especially on Dean Windass. 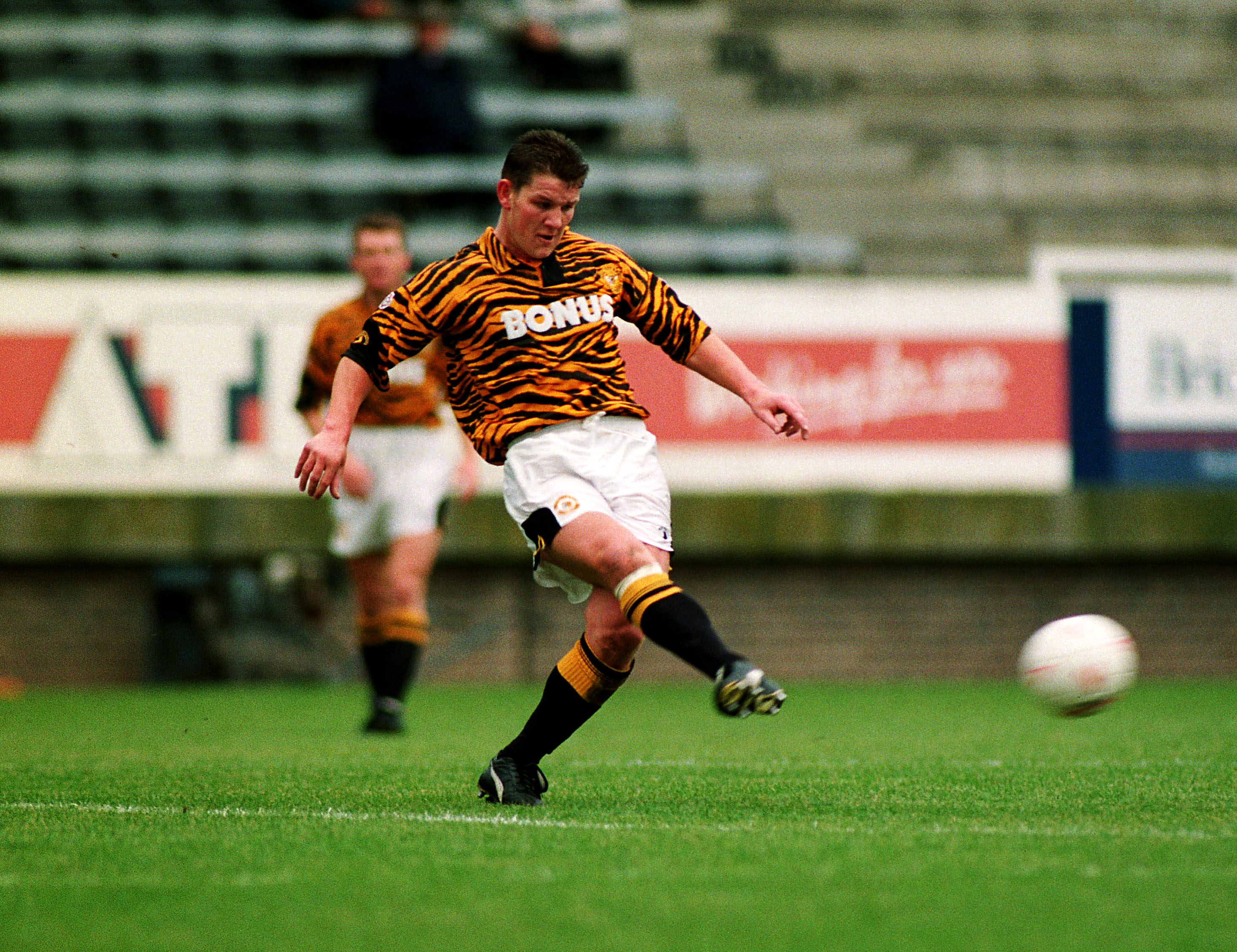 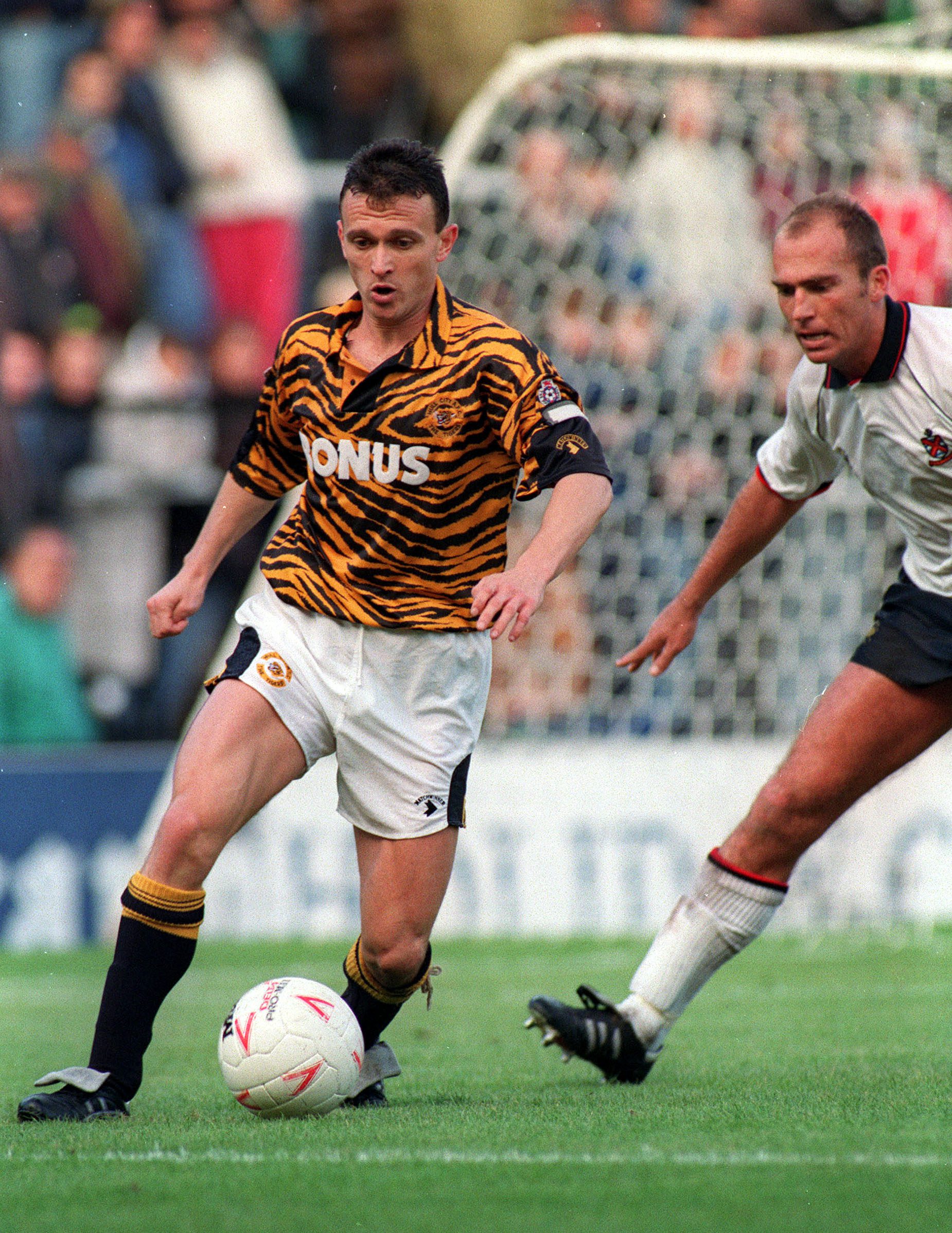 This monstrosity was designed by Basque artist Dario Urzay to mark the club's centenary in 2004 – and Bilbao only wore it in the Uefa Cup.

It was supposed to resemble a splatter of blood, but seems to look more like a trail of tomato ketchup splashed on a dining room table by a child after dinner.

Bilbao would've been better off sticking with their regulation white and red stripes.

And no wonder they only showed it off in European competition. 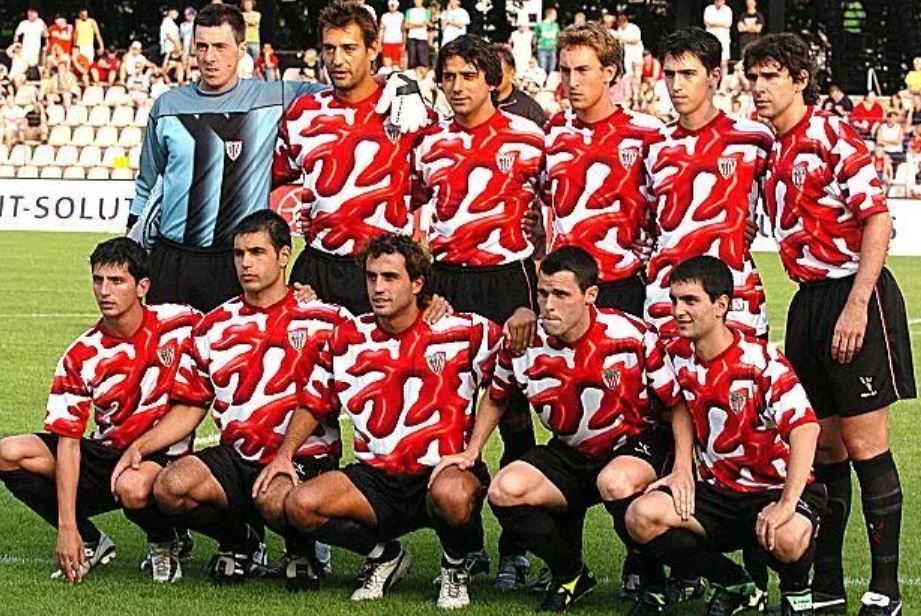 In the world’s first see-through strip, players from Bedale AFC — famed for their novelty outfits — lined up in transparent kits for Prostate Cancer UK.

Giant white arrows on the shorts and shirt point to their manhood, with a message saying: “Don’t forget to check.”

The North Yorkshire club, from the North Riding League, donate £5 from every kit sale.

Their previous strips have featured hot dogs, and bangers and mash. 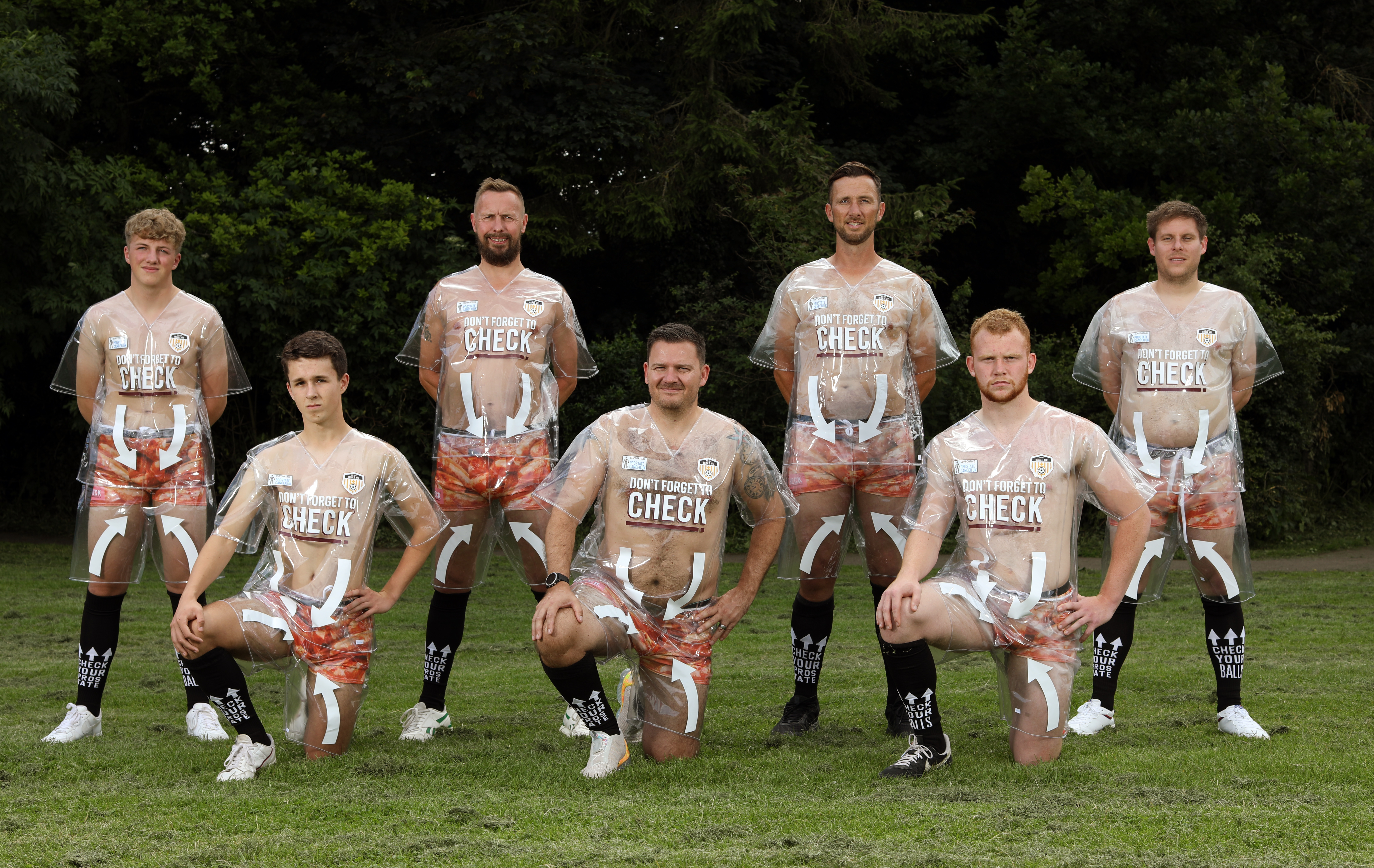