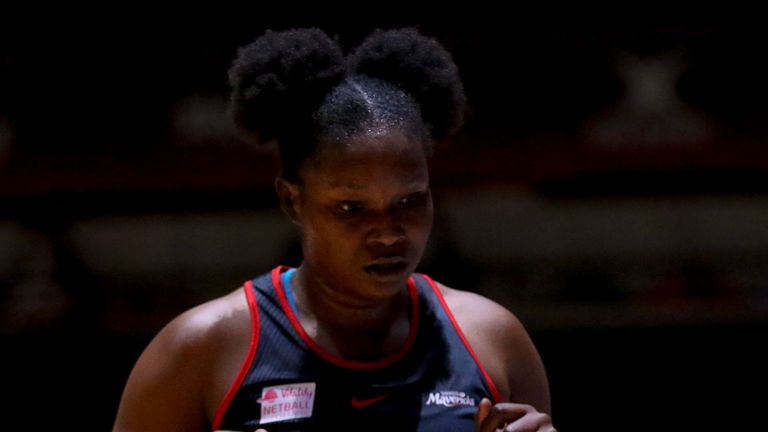 Razia Quashie’s season has come to an abrupt end after she sustained an Achilles injury against Team Bath Netball on Sunday afternoon.

The Saracens Mavericks’ defender left the court during the fourth quarter of their 46-35 victory over Team Bath Netball and the franchise provided an injury update at lunchtime on Monday.

“After assessing Razia Quashie’s injury last night, it appears to be an issue with her Achilles,” a statement said.

“It will see Raz’s season come to an early end. We are still awaiting scans and test results to examine the extent of the injury, but we will keep our fans updated in due course.

“Quashie has been a force of nature for us this season and we will be supporting her every step of the way through her rehabilitation process.”

The injury is Quashie’s second of the season, after she spent a period out of the game back in April.

After assessing @R_Quashie_'s injury last night, it appears to be an issue with her Achilles, which will see Raz’s season come to an early end.

We are still awaiting scans and test results to examine the extent of the injury, but we will keep our fans updated in due course. pic.twitter.com/EHFBtNQV2A

The club also said mid-courter Beth Ecuyer-Dale sprained her ankle after she left the court during the fourth quarter against Bath.

She will miss Mavericks’ encounter with London Pulse on Monday night.

With the personnel Kat Ratnapala has within her squad, Sasha Corbin is likely to move into the Centre position for their encounter with Pulse, with Georgia Lees slotting in at WA.

In defence, Jo Trip and Jodie Gibson will now need to step into the defensive circle together, in order to fill the gap left by Quashie’s absence, and Gabriella Marshall is likely to be the athlete starting at WD.

The injuries to Quashie and Ecuyer-Dale are ill-timed for Mavericks, as they continue to try and secure the last remaining play-off place.

Mavericks arrived at the final two rounds of the regular season with the greatest amount of matches still to play, and therefore points to secure.

However, London Pulse will be a dangerous next opponent.

Sam Bird’s team, who are playing on a home court at the Copper Box Arena, will have gained momentum after their 42-40 victory over Severn Stars on Sunday night.

Sky Sports is your home of netball. The Vitality Netball Superleague continues tonight, with two matches back-to-back on Sky Sports Mix and streamed on the Sky Sports YouTube channel from 5pm.