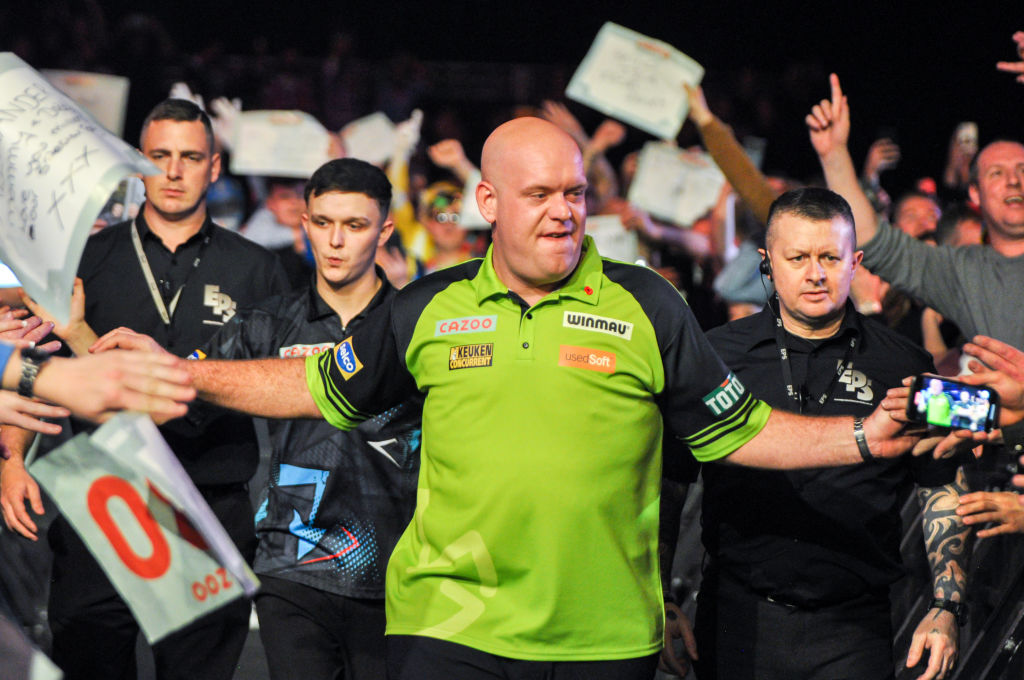 Michael van Gerwen knows he is the man to beat at the PDC World Darts Championship this year and both his rivals and the pundits seem to agree with him.

The 33-year-old has unquestionable been the player of the season, winning the Premier League, World Matchplay, World Grand Prix and Players Championship Finals, seemingly returning to his best form that had been missing for a couple of years.

He is ranked number three in the world, with Gerwyn Price at the summit of the rankings and reigning world champion Peter Wright second, but the world title would see the Dutchman regain top spot.

The most recent of his three world titles came in 2019 but MVG is perfectly placed to hunt down a fourth at Alexandra Palace this winter, and he is well aware of it.

‘I don’t have to prove that I am better than anyone, because they know if I play my A-game, I am the best,’ said Van Gerwen.

‘If you look to my games against Gerwyn and Peter, if you look at the stats – they don’t lie.

‘I have a big target on my back, but I can handle it. I’ve been under pressure so many times, and most of the time, I’ve survived.’

Price is never short of confidence himself, but even the Iceman admits that Van Gerwen is the man to beat in north London this time around.

‘Obviously Michael,’ Price said on Sky Sports’ Love The Darts. ‘He’s won four of the big majors this year. So if you look at it that way, Michael is probably the one to beat. And he is the top form player at the moment.’

Steve Beaton, still going strong at 58 years old, also fancies Van Gerwen, unless the Bronzes Adonis himself can get his hands on the trophy, telling Tungsten Tales: ‘Apart from me of course, it’s hard to write off Michael van Gerwen.’

Former BDO world champion and now Sky Sports pundit Mark Webster agrees, and while he feels it is an obvious answer, there is no need to be clever and look elsewhere for a tip for the title in 2023.

‘Mike van Gerwen. It’s a cop out answer but he’s just been the best hasn’t he? In the big moments this year,’ Webster said.

‘He wants more world titles and he’ll be craving it, especially after how last year went. So for me he lifts the title.’

The last World Championship was indeed very frustrating for MVG as he was forced to withdraw due to Covid after playing and winning his first match.

Wayne Mardle is also backing Mighty Mike, telling Sky Sports: ‘Look at the year he’s had. Winning the Premier League, winning the Matchplay and winning the Grand Prix and he’s kept it going. He recently won the Players Championship in Minehead and I just feel the longer format of the Worlds just suits his game. There’s loads of them who have a chance, but I just feel that Van Gerwen is the most reliable.

‘He’s playing the best darts in the world right now and I really think he can bag number four at Alexandra Palace.’

He starts his campaign this year against the winner of Niels Zonneveld and Lewy Williams, who clash in round one.