UFC president Dana White has promised to stage a championship fight in Perth next year, guaranteeing a return of the sport to the Western Australian capital city.

RAC Arena will host UFC 284 on February 12 in the sport’s first appearance in Perth since 2018. 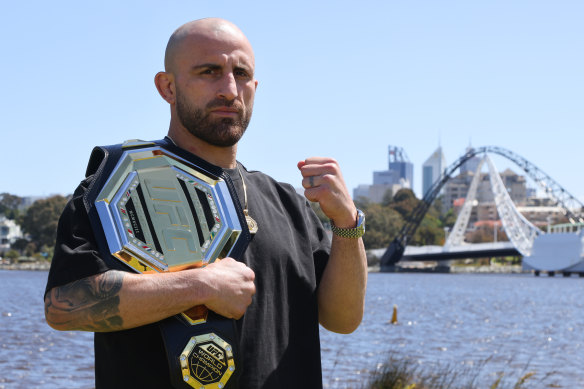 A UFC event that was scheduled for Perth in 2020 had to be postponed due to the COVID-19 pandemic.

The fight card for February’s event is yet to be revealed, but White promised it will be significant.

“I’m so pumped we are returning to Perth for UFC 284,” White told the UFC website.

“It was an amazing host city in 2018 and this February we’re bringing a stacked card headlined with a championship fight.

“Australian fans are some of the best in the world and they’ve had to wait a long time for this. I can’t wait to put on another massive show for them. I will see you there.“

UFC featherweight champion Alex Volkanovski was on hand in Perth to unveil the news on Tuesday, but it’s unclear if he will appear on the card.

Volkanovski has recently recovered from a hand injury and the Australian will fly to Abu Dhabi to serve as the official backup for the lightweight title fight between Charles Oliveira and Islam Makhachev on October 23.

In 2018, more than 12,437 fans attended UFC 221 at RAC Arena to watch Cuban Yoel Romero knock out American Luke Rockhold in the third round.

Romero won the bout with a powerful uppercut, but he had already been ruled ineligible for the interim middleweight belt after failing to make weight the previous day.