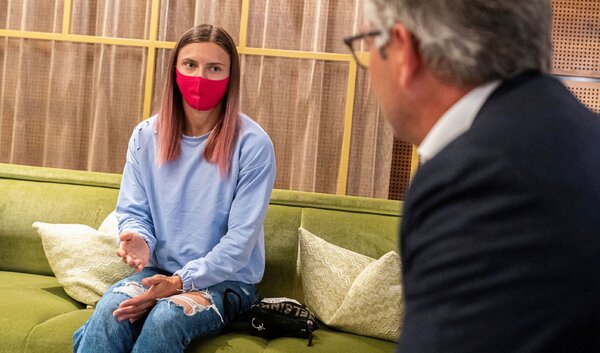 TOKYO — Two coaches involved in the attempt to force an Olympic athlete home to Belarus against her will have been stripped of their credentials and expelled from the Olympic Village, Games organizers said Friday.

The case of the 200-meter specialist Kristina Timanovskaya, 24, briefly turned the Tokyo Games into the center of a major diplomatic conflict when Timanovskaya sought sanctuary from the police at Narita International Airport. Timanovskaya, who is now in Poland, said she had been “kidnapped” after writing an Instagram post criticizing the Belarusian athletic federation’s preparations for the Olympics.

The International Olympic Committee had come under pressure over the slow progress of its investigation into the matter until, on Friday, the organization announced in a Twitter post that it had asked the coaches, Artur Shimak and Yuri Moisevich, to leave the Olympic Games. “They will be offered an opportunity to be heard,” the post said, noting that the investigation was continuing.

Timanovskaya complained in her video that her coaches had registered her for an event she hadn’t trained for, the 4×400-meter relay, because they had failed to conduct enough antidoping tests on other athletes.

In an interview with The New York Times this week, Timanovskaya named Moisevich, the head coach of the Belarusian national team, and Shimak, the deputy director of the Belarusian Republican Track and Field Training Center, as central players in the attempt to remove her from Tokyo.

She said the two men had come to her room at the Olympic Village to persuade her to recant the complaints she had made in her Instagram post and to go home. The order, they said, came from higher-ranking officials.

“Put aside your pride,” Moisevich can be heard saying on a partial recording Timanovskaya made of the conversation. “Your pride will tell you: ‘Don’t do it. You’ve got to be kidding.’ And it will start pulling you into the devil’s vortex and twisting you.”

He adds, “That’s how suicide cases end up, unfortunately.”

Timanovskaya can be heard crying on the tape. At other times she sounds defiant, refusing to believe that if she were to acquiesce and return home, she would be able to continue her athletic career.

The chairman of the Belarus Olympic committee is the eldest son of Aleksandr G. Lukashenko, the strongman leader who has held power in the country for 27 years. He has long sought to stifle any dissent, through measures including a brutal crackdown that began a year ago after a disputed presidential election. Targets of the crackdown also included a number of athletes, leading to the I.O.C.’s decision in December to bar the Lukashenkos from attending the Tokyo Games.