One more time for the road, my favourite Tommy Raudonikis yarn is almost certainly apocryphal but is just too darn good not to repeat. It was sent to me two years ago by reader John Campbell.

Back in the early ’80s, see, the great Parramatta Eels captain Stephen Edge is out injured, meaning that Peter Sterling, the blond, blue-eyed halfback, is given the captaincy of the Eels for their next game against the Newtown Jets. His big moment! His time to shine! 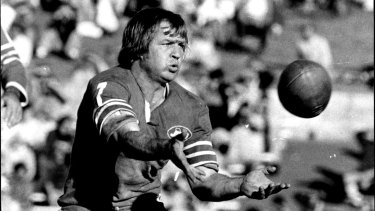 Tommy Raudonikis during his time at Newtown.Credit:Fairfax

The knock comes on the door and, sure enough, it is the ref calling out young Peter for the coin-toss. Sterlo follows the ref to the Jets’ dressing room. Ignoring the shouting coming from inside, the ref knocks on the door.

There is a loud, anguished growl on the other side, a few choice epithets and the door is wrenched open. Tommy Raudonikis stands glaring before them. He is shirtless, a mass of scars and bent bones, unshaven, missing teeth and with a nose resembling the letter “Z.” Even the ref seems horrified, but composes himself.

“Time for the toss, Tommy,” the whistle-blower says.

“We don’t give a f–k who kicks off!” snarls Tommy, slamming the door in their faces.

Reeling, Sterling had his worst game ever.

Sadly, I felt obliged to check with Sterling himself. He laughed uproariously to hear it, but declined to confirm the yarn true in every particular. “There are elements of truth but it wouldn’t stand up to ruthless cross-examination,” he said. “I will say Tommy was a very intimidating figure to play against!”

As to my own significant dealing with Tommy, that came with the profile you might see that the Herald reprised on Thursday. On the morning it ran in 1995, I took a call from Tommy who said he didn’t like it. Well, that’s not quite what he said. Most of the words used would make a wharfie blush, but he finished with “Next time I see you, I am going to bite your f—ing ears off!”

I remember the call fondly, just as Danny Weidler once said that the favourite sledge he had personally received in 30 years of sports journalism was Tommy telling him: “I don’t like ya. Next time I see ya, I’ll snot ya.”

Vale, Tommy. Whatever else, you were an Australian original.

No risk, no reward

When I was growing up on our farm at Peats Ridge, my mother didn’t quite believe in headaches so we, her seven children, never really got them.

She didn’t believe in colds or flu, so we never caught them.

She didn’t particularly believe in pills, so we never took them.

She didn’t believe a bit of rain could hurt us, so we thought umbrellas quaint.

She didn’t believe in tummy-aches so we rarely got them, so after ignoring her own for a few months, died before her time – of bowel cancer.

That balance between risk and reward, living a robust life while still taking sensible precautions is not always an easy one to navigate. Her and Dad’s approach in raising us worked out very well, and we didn’t know the week had truly begun unless our knees or elbows were scuffed and losing a bit of bark along the way was never a big deal. Gamophen soap could fix it.

It was only later, when she applied the same dictum to herself as a 74-year-old that the real problem showed.

How to navigate that in the modern world though? Funny you should ask. Lucy Turnbull has written a book on the very subject – called 50 Risks To Take With Kids – with the premise that, “the more kids are allowed to play in mud, create games and develop their own solutions to problems, the more they will thrive later in life.”

And I am happy to say when it comes to physical activities like sport, riding bikes etc, Turnbull comes down on the side of my own mother. Of bikes etc, she notes: “Your kid will fall off. Probably several times. The key is to make sure they get back on”.

Rah! The book is not only selling well in Australia, but – I am dinkum eating my heart out – also in Slovenia, while China has just put in an order!

The Alan Jones column, seriously comparing Israel Folau to Jesus Christ, insisting that he has been crucified and now is the time for his resurrection?

(He really did, by the way. In a manner that even the Chaser or the Betoota Advocate couldn’t have conjured in a satirical piece. You cannot make that shit up, in a better manner than the man himself!)

But as amusing as it was, when taken in tandem with the ludicrous move by the Australian Christian Lobby to get the whole Folau thing going again by launching petitions against the NRL to “let him play etc,” it starts to look like a concerted campaign. Peter V’landys gave the ACL short shrift in his classic manner, noting there surely should be other things they should be devoting their energies too – starting with poverty and inequality, and the chances of the NRL caving are – dot three, carry one, subtract two – zero. But, let’s just say for argument’s sake they did.

After the experience of Rugby Australia with Qantas, the experience of St George with their sponsors at the very mention of even the possibility of Folau playing, what NRL team in their right mind would sign Folau up? And if, say, you were the CEO of Flintstone Widgets putting a couple of million dollars a year for naming rights to an NRL jersey, and found that Folau would soon be wearing it, bringing inevitable consumer boycotts, would you have a right to be pissed off, or not?

The whole thing is a nonsense. Folau played this game hard, with cold-eyed calculation leaving a trail of destruction in his wake. Whatever the ACL says, why would any sport in its right mind take him on now? Still, while I have the attention of the ACL’s Mr Iles, allow me to pose a question that has been bothering me for some time, since it was sent in by email: “The bible says Adam was made from dirt and Eve was made from one of Adam’s ribs. If this is so, why do paintings of Adam and Eve in the garden of Eden show them with navels?”

Bulldogs coach Trent Barrett after a fourth loss to start the season: “If it was that easy, everyone would be an NRL coach and you’d fix it but again this isn’t the forum where I want to discuss it, I’ll sort it out with my team.”

Australian Christian Lobby managing director Martyn Iles on trying to get Israel Folau back into rugby league: “I thought it was all being fought in boardrooms with sponsors and media articles. The voice of the fans wasn’t there. That is what has motived this. Israel has committed no crime and also hasn’t broken any rules of the game. The reason he is out is because of his religious view. It is a campaign about equality I think.”

Peter V’landys, off the long run: “This is not about equality … Rather than wasting their resources on such an agenda, they should be focusing on more important issues facing society like poverty, inequality, racism and domestic violence.”

Fremantle coach Justin Longmuir flagged after their defeat to Carlton: “We need to put a consistent brand out there, which we haven’t for the first three weeks of the year.” Either that, or just win, coach?

Giants coach Leon Cameron on their brand against the Demons: “We played a tough brand of footy but just ran out of legs at the end.”

Swans assistant coach Don Pyke on their start to the season: “But, as I said to someone yesterday, it’s a bit like the Melbourne Cup: no one cares who runs past the post the first time, you have to get back around the second time.”

Waratah Will Harrison after his late conversion to tie the match missed: “I didn’t really get the best sleep. I switched off and tried to get away from footy. I had a beer with my dad in the lounge room. I went over that moment 1000 times in my own head before going to bed. At the end of the day, it’s my job to kick those goals and I didn’t. That’s probably going to stay with me until I get another opportunity to hit one.”

Ashleigh Barty after defending her Miami Open title and retaining her No. 1 ranking in the face of people saying she is only in that position mathematically, not truly: “It doesn’t really get to me. I mean, it’s just what people say and I can’t change their opinion, so it doesn’t stress me out at all.”

Former North Melbourne defender Sam Durdin took a very dim view of such remarks: “For a sporting professional who’s so vocal about the treatment of people with disabilities this is a shocking comment.”

Greg Norman scaling down: “As you progressively get gracefully older you find an interesting balance in yourself. The materialistic things you liked 25 years ago, you go ‘why did I even have those then? It was ego …’.” Greg? There are many things people will say about you, but “getting gracefully older” is not one of them!

Indian cricketer Sanju Samson doesn’t want to be the next MS Dhoni: “I don’t think anyone can be like MS Dhoni. I would like to be myself. Sanju Samson will be good enough.” Excellent!

AFLW player for Fremantle, Kiara Bowers, after their elimination: “My heart’s probably still out there, so I’ll probably go and pick that up on the way out.”

Team of the week

Australian women’s cricket team. Broke the record for consecutive one-day international victories last weekend, with 22. Could make it 24 on Saturday.

Ashleigh Barty. Defended her Miami Open title and is still No.1 in the world.

Jake Friend. Roosters skipper hangs up the boots, wisely, after suffering some 20 concussions in his career, the last few in a spate.

NSW Blues. Playing WA in the one-day final tomorrow and Queensland in the Sheffield Shield final next week.

Sydney Swans. Great to have the SCG rocking with them undefeated after four weeks, after recording a three-point win over Essendon on Thursday night.

Brisbane Broncos. Thoughts of adding a new Brisbane team adding insult to injury as they are a pale imitation of the juggernaut they once were. Imagine spreading the few stars they have, across two teams?