COPPER MOUNTAIN, Colo. — Like his mother, Brian Rice has played just about every sport.

Kat Brauer Rice, a former professional boxer who, according to Brian, was also good at basketball, softball and football, passed down her athleticism to her 16-year-old son. And one more thing, too: her family tradition of occasional ski trips.

Sitting side-by-side on the couch in their small studio condo at the base of the slopes of Copper Mountain Resort in Colorado, mother and son love talking up each other’s athletic abilities, and how the Rices have gone all in on one — Brian’s dream of becoming the first African-American snowboarder to compete in the Olympics.

He was 4 years old when he began snowboarding, in a ditch outside their home north of Detroit using an inexpensive plastic snowboard. It became apparent quickly, however, that Rice had a talent and passion for the sport. He began entering competitions at age 11. Within a year, he was winning every event.

“I’d done baseball, soccer, basketball, football — every sport you can think of. Nothing brought me as much joy as snowboarding,” Rice said.

From the day Kat saw him scale the entire playground structure in preschool, Kat noted that her son wasn’t afraid and had an “innate sense of body awareness.”

This comes in handy when soaring off a jump the size of a five-story building, spinning and flipping multiple times before landing. Such is the nature of snowboard competitions like slopestyle — in which athletes negotiate a series of jumps and rails — and big air, in which they are scored on their trick performance off a single, massive jump. 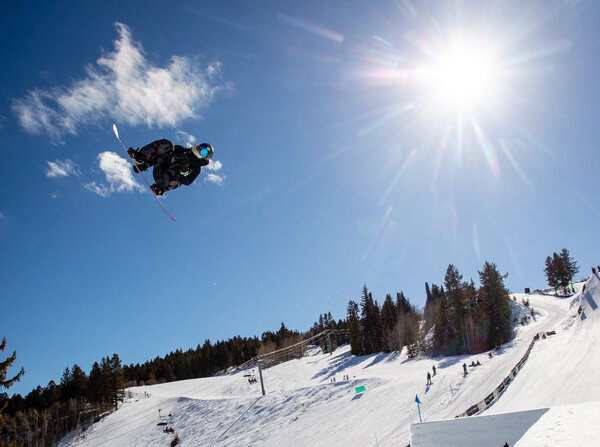 “I was always fearless, going after what I wanted to do, riding with older kids and people who were better than me so I could learn all the tricks and get a real grasp on what it was like to be a snowboarder,” Rice said.

He usually did that while being the only one out there who looked like he did.

As Rice’s skills progressed and he began winning against stiffer competition, family friends started calling him Flyin’ Brian. He realized that in order to become a big name in snowboarding, he’d have to move to bigger mountains.

Rice won a regional amateur competition in Michigan when he was 12, earning the opportunity to attend a weeklong camp in Colorado. The following year, he landed on the radar of coaches at Ski and Snowboard Club Vail — the organization that helped launch the careers of numerous Olympians, most notably Lindsey Vonn and Mikaela Shiffrin. He was invited to live with a host family in Colorado for the winter, keeping up with schoolwork remotely while training and competing.

Last summer, the Rices purchased the studio at Copper Mountain and Kat took on a full-time winter job doing Village Safety Patrol at the resort while juggling the progressively more demanding role as Brian’s combination mother and manager — his “momager.”

“I literally just Googled ‘how to get a Black snowboarder sponsored to go to the Olympics,’ ” Kat said.

She found the National Brotherhood of Skiers, an organization with more than 3,500 members whose mission is to increase the number of people of color in snow sports, and Jim Dandy Ski Club, an NBS affiliate and America’s first African-American ski club, founded in 1958 and based in Detroit. Both organizations enthusiastically got behind Rice’s Olympic quest.

“It’s not easy for a Black person from the Midwest to be able to fund this type of career,” said Janice Jackson, president of the Jim Dandy Ski Club. “We’ve had this mission of having someone of color appear on the U.S. Ski and Snowboard Team. We’ve had people who’ve gotten close, but never gotten there. Brian came along, right here in our own backyard.”

At the end of February, Rice notched one of the best results of his career — a fifth place in the U.S. Revolution Tour Big Air competition in Aspen, Colo. Scoring for this type of event is based on how well athletes perform two tricks off a massive jump. The day was windy, leading some athletes to curtail their trick selections and others to over or under rotate and crash. Rice was unshaken. Going up against some of the nation’s best snowboarders, he knew he’d have to go big. He threw two tricks he had never before landed — a backside 1260 (rotating three and a half times starting backward) and a frontside 1080 (rotating three times facing forward).

“For him to land both of those new tricks on that kind of a day, that’s where you separate yourself from the pack,” Kat said.

“Yup,” Brian added. “Hard work pays off. At the end of the day, I just have to do me. I have to pick myself up and do what I need to do.”

The teenager’s next big trick is a backside triple cork 1440 — launching backward and performing four complete rotations while doing three off-axis flips. The move has become relatively standard among Olympic-level snowboard champions, but Rice is content progressing one trick at a time. In the process, he wants to show other young African-Americans that traditional sports are not their only options and that even in a historically white sport like snowboarding, the sky is the limit.

“Other sports got repetitive,” Rice said. “Baseball, you hit the ball and run the bases. Soccer, you kick the ball, try and shoot a goal. Football, you run a guy over and try to catch the ball. With snowboarding, there is so much creativity. I saw from the beginning I could make it make my own. I could just have free rein and have as much fun as I wanted.”

Make no mistake, competing in the Olympics is something he wants, too.

“If, I mean when I make it to the Olympics, I can be on top of that podium showing the world it doesn’t matter where you came from, the color of your skin, or who your parents are. It’s just about how you get there,” he said. “I think if I can make it, then anybody can.”