A breakthrough year has ensured Ariarne Titmus will no longer be able to fly under the radar in 2019, Australian swimming head coach Jacco Verhaeren says.

But the Dolphins mentor has backed the 18-year-old to handle the new-found limelight when she resumes her budding rivalry with American great Katie Ledecky next year. 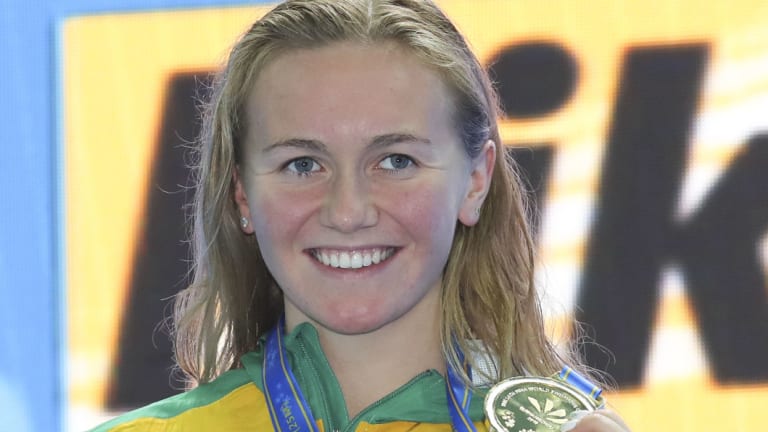 It came after she became the first woman to win the Commonwealth 400m-800m freestyle double since Tracey Wickham in 1982 and kept Ledecky honest at August's Pan Pacs in Japan where she was second to the American in the 400 and 800m.

Verhaeren stressed that Titmus should still be considered the "hunter" before her much-anticipated next round with Olympic champion Ledecky at the 2019 world long course titles in South Korea.

However, he believed Ledecky would now be looking over her shoulder after Titmus announced her international arrival with her world short course heroics.

"She had a breakthrough year on the international stage. I think it would be fair to say most people in the world now know who she is," Verhaeren said.

"But I think she can cope with all of that.

"Besides Ledecky, no one else can say they are the hunted.

"However, I am sure Ariarne will be looking forward to her battles with Katie next year and the years to come."

Titmus is a middle distance swimmer but earned comparisons with the remarkably versatile Ledecky with her world short course campaign.

She not only claimed 200m freestyle gold in an Australian record and the 400m title in a new world mark, Titmus also showed speed in the 4x50m freestyle relay team and clocked a world class 52.7 second split anchoring the 4x100m medley outfit in China.

Not even Ledecky has shown competitive speed over 100m, although the American is the reigning 200m, 400m and 800m freestyle Olympic champion and has new event, 1500m, also in her sights at the Tokyo Olympics.

Verhaeren still did not consider Titmus a sprinter but wasn't shocked by the teenager's express pace at Hangzhou.

"She did a very good time in the relay. She's getting better at top speed," he said.

"That doesn't make her a sprinter but it is good for her development."