The Buffalo Sabres started the year seeking to ignite their offense with new acquisitions, but instead they found ignominy with a historic losing streak.

The Sabres lost 18 games in a row before slamming the brakes on their skid with a resounding 6-1 victory over the Philadelphia Flyers on Wednesday.

Those 18 losses matched those accumulated by the 2003-4 Pittsburgh Penguins, who previously had the undesirable distinction of having lost more games consecutively than any other team.

Goalie Linus Ullmark had 31 saves, and defenseman Brandon Montour blew the contest open with an empty-net goal and then a superb individual effort that gave him two short-handed scores in the span of 37 seconds as the Sabres tightened their grip on the game late. 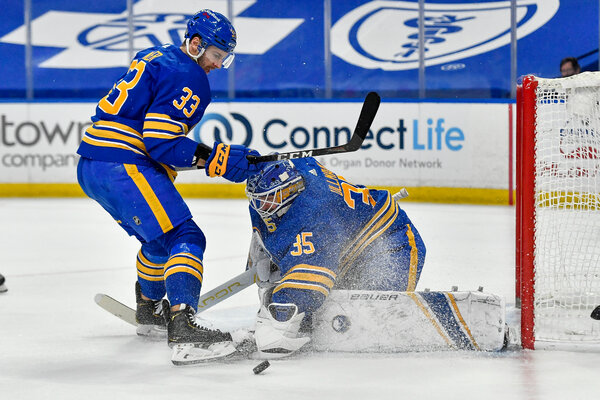 “You never want to lose,” said Montour, who praised his team’s positive through the streak. “Especially the streak we had there, everybody was talking about it, there was always something to say.”

Injuries have played a role: Buffalo was without the scoring forward Jack Eichel, who last played on March 7, toward the middle of the slump.

Without Eichel, their captain, the Sabres sought leadership by committee, and many players were vocal on Wednesday, Don Granato, the interim coach, said. The team had squandered a three-goal lead against Philadelphia in the third period on Monday, so Granato allowed his players to speak during the second intermission rather than making strategic adjustments or offering his own thoughts.

“We thought it was best just to hand it to them,” Granato said. “It’s your third period, not ours, and you know what to do.”

What they did was end a slide that had lasted more than a month. Here are some of the highlights:

The losing streak (0-15-3), which began on Feb. 25 with an overtime loss to the Devils, was equal parts woe and “whoa,” as the Sabres were abjectly bad at times and imaginatively so at others.

The Sabres nearly broke their free fall on Monday, when they took a 3-0 lead at home against the Flyers. But the Flyers evened the score in the third period before defenseman Ivan Provorov capped Philadelphia’s comeback with a goal 42 seconds into overtime.

“We haven’t been in this situation — we got panicked,” defenseman Rasmus Dahlin said in a video news conference. “The puck bounces their way, and — I don’t know.”

Montour was even more blunt in his assessment, saying that any team in the N.H.L. should have won a game it had led by 3-0, much less a team as desperate for a victory as Buffalo.

Whether or not that was the nadir of the streak may be a matter of debate.

They struggled at both ends of the ice.

The Sabres closed February by being shut out in back-to-back games against Philadelphia, another of the worst defensive teams this season.

Between March 4 and March 11, the Sabres allowed five goals in each of five consecutive games, which was as close as they had come to defensive consistency.

They followed that up with two more shutout losses, falling to the to the Pittsburgh Penguins and the Washington Capitals by an aggregate score of 9-0. They were shut out five times over all and were outscored, 75-30, as they plummeted to the bottom of the league standings.

It was futility. But was it a record?

The disparities between eras make the official record-keeping and bar-stool arguments a bit messy.

Starting with the implementation of the shootout in the 2005-6 season, the N.H.L. eliminated ties. The 2003-4 Penguins, who also lost 18 in a row (0-17-1), played in the final season before shootouts, but the league had a system, as it does today, that awarded teams a point in the standings for reaching overtime even if they lost.

Technically, the N.H.L. considers overtime losses and shootout losses to be equivalent to ties for historical purposes, as any of the three results would yield a point in the standings. Furthermore, for much of the league’s history, any game that would have gone to overtime or a shootout under current rules would have instead ended in a tie, as there was no regular-season overtime period between 1942 and 1983.

In N.H.L. records, the longest losing streaks, at 17 regulation games, belong to the 1974-75 Washington Capitals and the 1992-93 San Jose Sharks. The Sabres’ longest string of regulation losses was nine, and the 18 straight defeats are considered a “winless streak.”

The longest winless streak in league history belongs to the Winnipeg Jets franchise, today’s Arizona Coyotes. They were the class of the World Hockey Association, as the only franchise to win three Avco Cups, but their early days in the N.H.L. were dreadful. In 1980-81, their second N.H.L. campaign, they went winless for 30 games, losing 23 and tying seven times.

But there seems to be little question that the Sabres’ slump will bring further infamy to a franchise that hasn’t made the playoffs since 2011, hasn’t won a postseason series since 2007, hasn’t made the finals since 1999 and has never won the Stanley Cup over its 50-season history.

A coaching change did not stop the streak.

The Sabres made an outside-the-box coaching hire before last season by selecting Ralph Krueger, who had coached the Edmonton Oilers in 2012-13 but had spent the previous five years as the chairman of an English Premier League soccer club. The team fired him on March 17, when the skid had reached a dozen losses, and made Don Granato the interim coach. Krueger had taken over a team that started strong in 2018-19 and then did so again under him in 2019-20, only to fall off as those campaigns progressed.

Before this season, they had hoped to make the most of an offense that already featured top picks turned stars like center Jack Eichel and Dahlin. They added Taylor Hall, the most sought-after forward in free agency and the 2018 most valuable player, on a one-year contract. They also traded for the veteran center Eric Staal, who led the Carolina Hurricanes to a Stanley Cup victory and scored 100 points in 2006 and experienced a resurgence with the Minnesota Wild.

The day Krueger was fired, General Manager Kevyn Adams all but heaved Hall onto the trade block. Staal was traded nine days later, with 50 percent of his remaining salary retained, in exchange for two middle-round draft picks.

Several players have performed below expectations.

No Sabre who has played in at least 15 games this season has a positive plus-minus rating, and as of Wednesday evening, the four worst ratings in the N.H.L. belonged to Buffalo players, including Dahlin’s league-worst negative 33. Staal and Hall combined for 28 points, while the production of Dahlin and another offensive-minded defenseman, Rasmus Ristolainen, has also flagged considerably.

The former all-star wingers Jeff Skinner and Kyle Okposo have combined for a meager 13 points this season, despite counting for $15 million and around 18 percent of the salary cap. Okposo has been hindered by health issues, but Skinner’s even more underwhelming performance has come two seasons after he scored 40 goals for the Sabres.

As a team, Buffalo is tied with the Anaheim Ducks and the Devils for the second-fewest goals scored and is near the bottom in goals allowed.