Tokyo: Australian swimmer Timothy Disken managed to brush aside the heartache of his mother’s death this week to help his country win a silver medal in the men’s 4x100m medley relay (34 points) on Friday night.

Paralympics Australia announced on Friday that Disken, a two-time Paralympian, was mourning the death of his mother.

Disken was unable to return to Australia following her death and wanted to compete in his final event at the Paralympics.

He wrote on Instagram before the race: “Mum, I hope to go out there on Friday and make you proud, whatever the result … I know you’ll be with me every stroke.”

Disken swam the second leg of the relay and maintained Australia’s third position at the halfway mark, before Will Martin and Ben Popham produced fine splits.

Australia finished second, 1.11 seconds behind the Russian Paralympic Committee, to take the team’s final tally in the Paralympic pool to eight gold, 10 silver and 15 bronze medals. 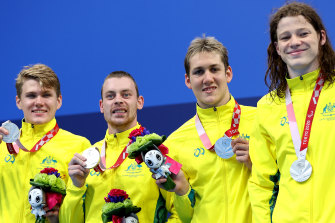 Disken spoke after the race about what he described as a “rough three days”.

“We lost my mum on Tuesday night and just trying to get up to race tonight was hard in itself,” Disken said on Channel Seven. “The support from the team has been phenomenal. I couldn’t be in a better spot for the heartbreak I’ve had over the last 72 hours. To be able to pull that out and get a silver with my mates … I’m so proud.”

Earlier this week, Disken took to Instagram to pay tribute to his mother.

“Never imagined I’d have to write this,” Disken wrote. “Didn’t think 2021 could get any worse. I sit here lost, confused, distraught, in shock and just empty. Sometimes, life just isn’t fair. I’ve lost my number one supporter, my rock and my best friend. The pain is unimaginable, and losing you is by far the hardest thing I’ve ever had to endure.

“Without your undying love, grit, determination, stubbornness … and unwavering support I wouldn’t be the person I am today. Heck, I wouldn’t have even survived day one.

“To my family back home, I’m so sorry I can’t be there to grieve with you and comfort you, you are all in my thoughts.”

Disken will travel home on Monday with an Australian team on their charter flight but will have to spend two weeks in hotel quarantine before he can reunite with his family.

“This is an extremely difficult time for Tim and being away from home makes it even harder for him,” said Kate McLoughlin, Australia’s chef de mission.

“This team is incredibly tight-knit and supportive and Tim knows that all our wellbeing resources are available to him.”

Head coach Brendan Burkett added: “It’s hard to put into words what Tim is going through at the moment and we’re all deeply saddened by his mum’s passing.

“To lose your mum is devastating and every single member of our team is supporting him through this emotional time.”