Raise your hand if you thought the Knicks would have a better record than the Nets through the first 10 percent of the season.

The Nets are 4-4, which isn’t a disaster but does reflect an uneven start. They looked unstoppable in the preseason, and then opened the regular season with dominant wins over the Golden State Warriors and the Boston Celtics. Since then they’ve lost four out of six and have looked quite mortal.

One of the losses was against the Memphis Grizzlies in overtime when the Nets sat their two best players, Kyrie Irving and Kevin Durant. Another came against the Washington Wizards when both Irving and Durant missed quality looks at the end of the game. The team could just as easily be 6-2.

But it’s not. And while it is still early, the Nets have less time than usual to collect themselves because the season is 72 games rather than the usual 82. It’s also unclear when Durant, who missed Tuesday’s win against Utah because of Covid-19 health and safety protocols that will keep him out for at least seven days, will be back in the lineup. The team has not specified which aspect of the protocols prompted Durant to be held out of the game.

The Nets are also without Spencer Dinwiddie, a starting guard who partially tore the anterior cruciate ligament in his right knee on Dec. 27 and is likely to miss the rest of this season after playing in just three games. It’s a significant loss for a team with championship aspirations. Dinwiddie averaged 20.6 points per game last season and carried the team without Irving and Durant, who were injured.

Coach Steve Nash clearly felt some urgency too, making wholesale changes to the lineup on Tuesday against the Jazz. The Nets blew out Utah, 130-96.

“We were struggling,” Nash said afterward. “I think we’re going to continue to experiment. We have to find out who we are, what we are and where we need to improve.”

Here is a look at what is and isn’t working for the Nets so far this season.

Irving and Durant have been nothing short of brilliant, despite their long injury-related layoffs. Durant is averaging 28.2 points and 7 rebounds per game on 51.4 percent shooting from the field, close to his lofty career averages. Irving is at 27.1 points a game, far above his career average of 22.5.

So far, the duo have erased any doubt that the ball-dominant All-Stars can mesh. Irving is a skilled ballhandler — possibly the best Durant has ever played with — who has done good work in finding Durant in spots where he likes the ball.

Not Working: Timothé Luwawu-Cabarrot in the starting lineup 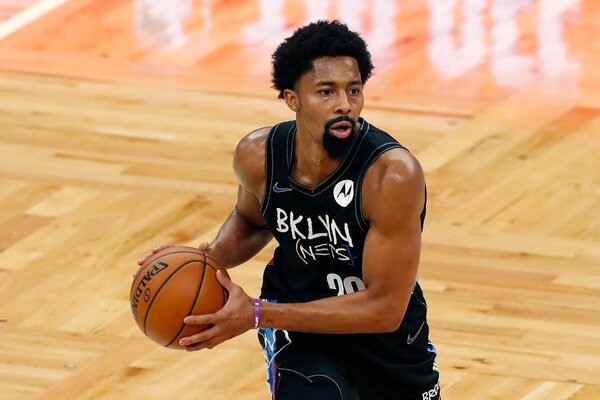 Timothé Luwawu-Cabarrot, a hardworking 25-year-old, has a nice story. Drafted late in the first round in 2016, he’s now on his fourth team in five years. But he found a home with the Nets after some standout performances last season. Until Tuesday night, Nash had tasked him to start in place of the injured Dinwiddie.

And the early results weren’t good.

In the three games with Dinwiddie in the starting lineup, which also included DeAndre Jordan, Joe Harris, Irving and Durant, the Nets were stifling on both ends of the floor. This lineup had a 35.3 net rating — essentially a measure of how much better this lineup was than its opposition — according to the N.B.A.’s tracking numbers.

But in the four games with Luwawu-Cabarrot instead of Dinwiddie on the floor, the Nets were significantly worse, having a minus-12.3 net rating. The Nets were playing worse than their opponents with this lineup, even with Durant and Irving on the floor. Perhaps this explains why Luwawu-Cabarrot came off the bench again on Tuesday night.

Since Dinwiddie’s injury, the Nets have struggled defensively, whereas in the games he played, they did not.

So it’s Luwawu-Cabarrot’s fault, right? No, not quite. He’s having a solid year, averaging 8.9 points per game on 46.4 percent shooting, both above his career averages. This outpaces Dinwiddie, who was putting in 6.7 points per game on a dismal 37.5 shooting.

Where is the problem then?

It involves Jordan and Jarrett Allen. The Nets brought in Jordan, 32, before last season, even though they already had a young, promising starting center in the 22-year-old Allen.

Jordan had been moved into the starting lineup late last season, and Nash kept him there, but the team has been significantly better offensively with Allen on the floor than with Jordan.

Nash appears to have seen the light on this: On Tuesday night, Allen got his first start of the year, and he rewarded the Nets with 19 points and 18 rebounds. Allen is exceeding his career averages in points (10.8 points this season), rebounds (11.6) and blocks (1.8). Jordan, meanwhile, is averaging 4.4 points and 6.8 rebounds a game.

Allen had been playing more minutes than Jordan, even before the starting lineup switch (22.9 minutes per game for Allen before starting Tuesday; 19.1 for Jordan). After the big win over the Jazz, that gap seems likely to grow.

Caris LeVert, 26, has been considered a foundational piece of the Nets since he made his debut in 2016-17. He’s versatile, hard to stop in the open floor, and has improved his playmaking. His development has been hampered by injuries over the past four seasons, but he’s healthy now.

This season, Nash made the surprising decision to start Dinwiddie and bring LeVert off the bench as the sixth man. LeVert showed that he could run the offense in the bubble over the summer without Dinwiddie, who missed the summer restart after testing positive for the coronavirus.

Except so far, LeVert hasn’t played well. He’s averaging 14.5 points a game on a terribly low 39.2 shooting percentage. He’s only hitting 28.9 percent of his triples, which makes him a liability. (A good sign: LeVert’s assists are up and turnovers are down slightly from last season.)

When LeVert shares the floor with the Irving and Durant, the Nets play extremely well (16.3 net rating). But the Nets’ bench lineups led by LeVert are getting swamped (minus-7.4).

The biggest problem here is that if LeVert doesn’t start hitting his shots, Nash won’t have the option of sitting both Durant and Irving at the same time.

— Landry Shamet, acquired in the off-season to add shooting to the Nets, has not been shooting well. He’s only hit 23.1 percent of his threes, even though his career average coming into the season was 40.2 percent.

— Harris, whom Nash moved to the bench on Tuesday, has feasted off playing with Irving and Durant. He’s hitting an absurd 51.1 percent of his 3-pointers, far above his career average and a better rate than when he led the league in 2018-19.

— Jeff Green is shooting 60.9 percent from the field. You read that correctly.