In a Miami hotel room, Derrick Jones Jr. and his agent, Aaron Turner, sat on a gray, three-seat couch with a laptop propped open on a coffee table in front of them.

This was the start of N.B.A. free agency last weekend, compressed and frenzied, squeezed in just after the draft and right before training camp, when dozens of players mulled multimillion-dollar offers as they sat in hotel rooms, living rooms and bedrooms around the world.

For Jones, 23, the moment offered time to reflect on how he had carved a long route to stability. He would end the night with an agreement for his first guaranteed N.B.A. contract after being passed over in the 2016 draft out of U.N.L.V. He latched on in the N.B.A.’s developmental league before climbing his way to the Phoenix Suns and the Miami Heat, earning a reputation as a dynamic leaper and a grinding defender.

On this night, Turner, the 34-year-old president of Verus Basketball, had secured meetings with three teams he believed would be interested in offering the contract that Jones hoped for, a multiyear deal starting at the league’s midlevel exception of $9.76 million.

An article published the day before in The Miami Herald had stirred some anxiety. In it, an anonymous executive speculated about Jones: “If he got even $7 million a year, I would be shocked. If he gets $15 million over two years, his agent should get a bonus.” Turner preached confidence to Jones about his market value based on analytics.

The N.B.A. allowed teams to begin negotiations with free agents on Friday at 6 p.m. Eastern time. Turner checked in with the three teams he had planned on meeting with five minutes later to ensure they were indeed interested in offering a deal starting at the midlevel.

Returning to the Heat remained an option, although Turner predicted Miami would want Jones back on a one-year deal. The Charlotte Hornets could offer the largest contract. However, the Hornets had targeted Gordon Hayward, and Jones could not bypass other options to wait them out. (Charlotte agreed to a four-year, $120 million deal with Hayward later that weekend.)

Jones started his first meeting, with representatives of the Sacramento Kings on a video conference call at 6:28 p.m.

Jones, wearing a black T-shirt, listened quietly and intently, nodding his head during much of the eight-minute pitch.

“What’d you think?” Turner asked when it ended. 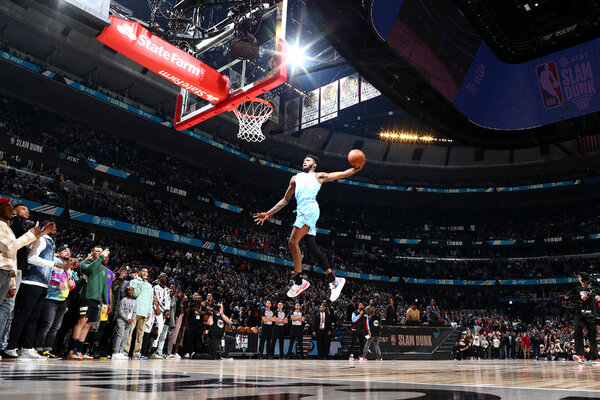 Few N.B.A. players endured as much whiplash as Jones in 2020. He won the N.B.A. dunk contest in Chicago on his 23rd birthday; as a child, he had told his father he would win it one day.

The next month, the coronavirus pandemic shut down the league. Jones’s personal chef left Miami, forcing a diet change that caused him to drop several pounds. Then Jones tested positive for the virus but recovered before joining the N.B.A. restart in a bubble at Walt Disney World near Orlando, Fla., where he struggled with being away from his three young sons for months.

In the final seeding game before the playoffs, Jones collided with Indiana Pacers center Goga Bitadze and was carted off the court on a stretcher with a sprained neck. Then he played only spot minutes as Miami advanced to the N.B.A. finals against the Lakers. He had averaged 23.3 minutes and 8.5 points per game during the regular season.

The setbacks stunted his momentum. Turner believed that Jones had untapped offensive potential and a high defensive ceiling. To demonstrate that ahead of free agency, he sent teams an informational packet showcasing Jones’s advanced defensive metrics.

“Talk about what you do offensively,” Turner said to Jones between meetings. “Let them know, too, whatever calls we have next, ‘I’m going to elevate this team defensively.’”

Jones smiled. “That’s something that they know that’s going to happen,” he said.

Still, Jones delivered the line in his next meeting, with a delegation from the Portland Trail Blazers.

“If I was to come there, I believe that me and Robert Covington could help the team a whole lot,” Jones said, adding that he hoped to be named defensive player of the year in the future. “On defense, I’m going to be guarding the best players. That’s what I want.”

The Portland call lasted nearly an hour, with Jones engaged and asking questions. He appeared ready to commit in the moment. “By the end of the night, we’ll get back to you,” Turner said, ending the call.

Jones received a delivery of chicken wings during a break before a final pitch from the Minnesota Timberwolves. After an encouraging meeting, Jones could envision himself as part of an organization that treats its players holistically, styling personalized nutrition, sleep and recovery plans.

“They made it a little harder,” Turner said after the call. “Just because I can tell they’re so creative. They’re different. I like that.”

“That made me start thinking a little bit more,” Jones said.

“They helped themselves a lot with that,” said Anthony Wells, Jones’s trainer, who was also in the hotel room.

“It all sounds good,” Jones said before listing some of Minnesota’s immovable components. The team featured a franchise player in center Karl-Anthony Towns, plus Malik Beasley, the No. 1 overall draft pick, Anthony Edwards, and the former All-Star point guard D’Angelo Russell.

“That’s four players ahead of me that’s going to touch the pill,” Jones said.

He returned to the Trail Blazers. Their organization is geared for the playoffs, built around guard cornerstones in the All-Star Damian Lillard and CJ McCollum. Jones was looking to expand his offensive responsibilities, and he could reduce some of Lillard and McCollum’s offensive burden by bringing the ball up after grabbing a rebound.

The organization had a healthy track record of developing wing players like Nicolas Batum, Al-Farouq Aminu and Wesley Mathews Jr., leading to large contracts later in their basketball careers.

The Trail Blazers had inquired about Jones’s sons and detailed the area’s community and educational system, aspects that caught Jones’s attention. They also talked with Wells about how his work with Jones could be incorporated into the team’s program.

The meetings over, Jones declared Portland as the favorite, a place where he would be willing to sign a two-year deal with a player option for the second season.

“I might be able to get you more, but that’s $20 million,” Turner said. “Your life just changed for your kids completely.”

The Trail Blazers had cautioned that they would be talking to other free agents that night and would sign the first who called back agreeing to an offer.

Turner learned from other sources throughout the evening that the Trail Blazers were not bluffing.

Jones needed a couple of minutes. He had decided to listen to pitches at the hotel rather than at his residence because he wanted a quiet spot to contemplate with his team.

Now he had left the room and ventured outside for some fresh air and to consult with his father over the telephone.

Minutes ticked. Turner was antsy. He worried that the Portland deal could slip from their grasp.

Where we at? Turner texted.

Lock it in. Portland. Jones responded.

Good call. Come up. We’ve got to call them.

Turner called Minnesota back, asking if its offer could be raised and if not, to inform them, as a courtesy, that Jones would be headed elsewhere.

Once Jones returned to the room, Turner called the Trail Blazers.

“All right, DJ has something to tell you,” he said.

Jones looked down, grinned and said, “I’m coming to Portland.”