The quest for gender equality in sport has come a long way, but the starting point was a long way behind. Let's celebrate progress in sport, but also acknowledge there is still much to be done. The dial is shifting – just not fast enough.

Importantly, positives have become more visible throughout my career as a sports executive. No longer do I go to awards nights where the male bias is so entrenched on the honour roll that mutinous women discuss a mass walkout from the sea of self-congratulatory dark suits.

Earlier in my career, when sports conferences were listed, I would check how many presenters were female. When there were none, which was often, I would ring the organiser and say "I just wonder whether this conference is open to women as well?". Then I would offer the names of five well-qualified female speakers. 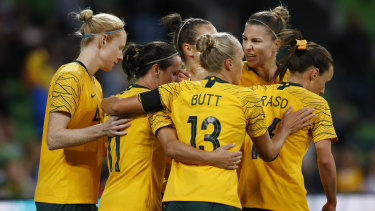 The Matildas are among the most respected national teams.Credit:AAP

The "Panel Pledge" instituted in 2012 by the Male Champions of Change means that when asked to participate in or sponsor a panel or conference, the first response is to enquire about organiser efforts to ensure women leaders are represented. Today, female speakers often receive front-page billing on event brochures.

Some might say it's gone too far; I prefer to say it's about time.

All have major competitions ahead in 2019 that will attract eyeballs, media coverage and bums on seats, while inspiring a next generation for whom, ideally, all this will be the norm.

Yet, no matter how much more friendly and inclusive today's environment, sport can remain an inhospitable and misogynistic place.

Women comprise 24 per cent of CEOs across the 63 national sporting organisations funded by Sport Australia and the AIS. The number across the high performance coaching system is 15 per cent, while a mere nine per cent of accredited Australian Olympic coaches in Rio were female.

The ASX shares this historic under-representation, which does not make it right.

By differentiating 'women's football', the usual connotation is that the 'women's' version is the inferior brand.

Clearly, more depth and diversity is needed in the Australian sports sector, and the AIS Talent Programs are designed to equip women with the transformational skills to progress to leadership positions and thus challenge the long-entrenched status quo.

Not only is it good for business, it's critical for young women to see role models holding positions of influence who, in turn, can drive change from within.

The commitment to equality is embedded in everything we do.

But fundamental challenges remain. Sport is such a hyper-masculine environment, particularly at the pointy end, that its blokey nature can deter females seeking senior coaching, board and administrative roles.

That is despite half our athletes being female.

At the elite competitive level, consider the national league coach who is assumed to be the team manager so keeps getting handed the key to the team locker-room. She is, repeat, the coach, not the property steward or menu-planner.

There are female CEOs among some of our top-funded sports, including the likes of Raelene Castle in rugby, Lynne Anderson at the Australian Paralympic Committee, Marne Fechner in netball, Leigh Russell in swimming and the recent appointment of Jerril Rechter at basketball.

All are smart, well-educated, confident and connected, they also have disparate backgrounds and styles. Which is proof that what takes all types can also cater for many – providing that doors and minds are open.

Earlier this year, I started a conversation about the need to rewrite the language of Australian sport; about dropping the unnecessary, divisive labels and the obsolete sub-category known as "women's sport". There is just  sport. It's for everyone.

Football, for example, is not a game played by men. By differentiating "women's football", the usual connotation is that the "women's" version is the inferior brand. The response was enormous – and overwhelmingly positive. Women in sport, though, like people of every age, gender and ability, still need to be encouraged, supported and celebrated.

So, on this International Women's Day, my optimistic vision a decade from now is that a 50-50 CEO gender balance in Australian sport is business as usual, and reflects a more equitable society of which we can all be proud.

Kate Palmer is the chief executive officer of the Australian Sports Commission.