Taekwondo, the Korean martial art that features a dazzling array of spinning and chopping kicks, made its Paralympic debut in Japan. The Games ended on Sunday, with 68 athletes from 35 countries competing in taekwondo under the klieg lights at a large convention hall just outside Tokyo.

In many other sports, Paralympic athletes from wealthier countries tend to have an advantage given how much their performance can depend on technology like customized wheelchairs or prosthetic running blades. But as in the Olympics, taekwondo has a democratizing effect because it does not require expensive equipment or large training facilities. Countries like Croatia and Egypt, which both won relatively few medals at the Games overall with seven apiece, had athletes on the podium in taekwondo. The only athlete to win a medal at the Tokyo Paralympics from Peru was Leonor Espinoza Carranza, who won a gold medal in the women’s under-49 kilogram event. 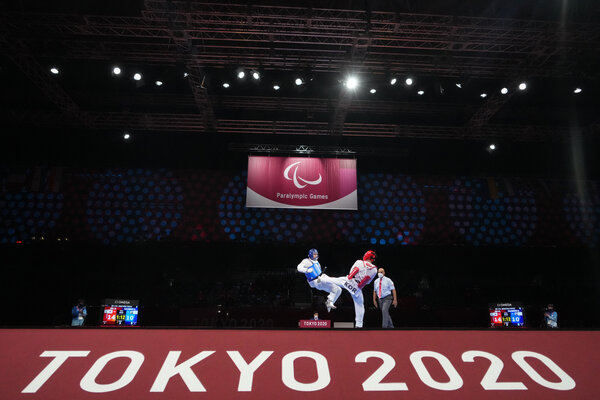 The matches, which are short and explosive, take place on an octagonal platform, with the athletes wearing vests embedded with electronic sensors that can track the precision of the kicks that score points. This innovation, said Chungwon Choue, the president of World Taekwondo, makes taekwondo one of the “most fair and transparent sports.”

“It reduces human error in judging,” said Choue, who noted that the scoring process was equitable in another way: Referees are split evenly between men and women.

Taekwondo attracted extra attention as it made its debut because one of the competitors, Zakia Khudadadi, 22, was an Afghan athlete who made a dramatic escape from Kabul to make it to Tokyo. Khudadadi lost her two matches.

In an effort to expand the sport, World Taekwondo has set up a separate foundation to introduce the martial art to refugee camps in Djibouti, Jordan, Rwanda and Turkey. A refugee from a camp in Rwanda, Parfait Hakizimana, originally from Burundi, competed at the Tokyo Games.

As taekwondo made its Paralympic debut, it streamlined the categories in which athletes compete, consolidating different impairment classifications. For some athletes competing against rivals with lighter disabilities, the competition was particularly fierce. “Of course it is a bit messy because all the classes were combined together,” Viktoriia Marchuk of Ukraine said after winning a match against Khudadadi. “But still my dream has come true, and I am very happy to stand here.”