Australia’s elite netballers will earn 22 per cent more next year after agreeing to a new pay deal which will see the maximum salary rise to $91,500.

This week, Netball Australia, the netballers union and all eight Super Netball clubs agreed to the new pay deal to ensure netballers remain the highest-paid female athletes across any domestic league in Australia. 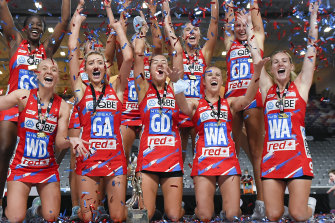 “This landmark deal ensures our players are the highest-paid female domestic club athletes in the country and our league remains the best in the world,” Ryan said.

“Increasing the sustainability of netball and improving athlete conditions were central to these negotiations and we are delighted to reach an agreement on this deal.”

The deal also provides funding for training partners which will see their fee increase from $3,500 to $5,000 per year.

The pay increase comes at a time where clubs are calculating the massive bill which has been handed to them as a result of COVID-19 outbreaks complicating the 2021 season.

At the beginning of this year, all eight teams and Netball Australia made the call to split any relocation costs nine ways.

And while clubs had accounted for some costs, nothing could prepare them for a year which saw the league relocated four times in a month in a bid to finish the season.

The total COVID-19 relocation costs are now believed to be over $3 million, meaning each club will soon be handed a bill of over $330,000.

Australian Netball Players’ Association president Jo Weston said the pay rise for 2022 was appropriate given the significant sacrifices made by the athletes over the past two seasons.

“It is hugely satisfying that, following the league’s ground-breaking new broadcast deal in February, players are being appropriately acknowledged through this new pay deal for our contribution to the sport and for the sacrifices we have made over the last two years,” Weston said.