Sun Yang, a former Olympic champion and one of China's most celebrated athletes, had his eight-year ban from swimming suddenly overturned on Wednesday by Switzerland's federal court, which upheld a challenge questioning the neutrality of one of the panellists who had issued the penalty.

The Swiss federal court's decision was rare encroachment on the body that issued the suspension, the Lausanne-based Court of Arbitration for Sport. Its decision means Sun, whose competitive career was effectively ended by the doping ban, is free to resume swimming until his case is heard by a different panel at CAS. 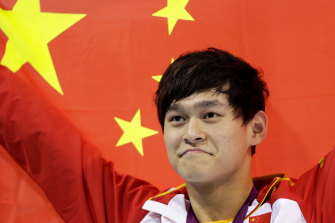 Sun Yang has had his ban lifted and will have his case heard by a different CAS panel.Credit:AP

Sun, 29, a six-time Olympic medallist and the first Chinese man to win a swimming gold medal at the Games, has waged a multi-year battle with the World Anti-Doping Agency to preserve his eligibility to swim in international competition.

WADA brought a complaint against Sun to the court last year after swimming's international governing body declined to penalise him for refusing to cooperate with three anti-doping officials who had travelled to his home in China to retrieve blood and urine samples. The court, after a hearing last November that was marred by translation issues, agreed with the anti-doping agency's underlying claim that Sun had violated rules governing efforts to tamper with doping procedures.

WADAnow will have to argue its case against Sun, China's most famous athlete, all over again.

"WADA has been informed of the decision of the Swiss Federal Tribunal to uphold the revision application filed by Chinese swimmer Sun Yang and to set aside the 20 February 2020 award of a Court of Arbitration for Sport (CAS) Panel," the global anti-doping body said in an emailed statement.

The judgment, WADA said, was not based on the merits of the case, but on a challenge against the chairman of the three-person CAS panel, the former Italian foreign minister Franco Frattini. Sun's lawyers had appealed after gathering what they said were public comments by Frattini that included anti-Chinese sentiments. News media reports earlier this year had highlighted Twitter posts from Frattini's account expressing his disdain at examples of animal cruelty in China.