After Shamorie Ponds of the St. John’s Red Storm fed Mustapha Heron for a rim-rattling dunk before a capacity crowd at Carnesecca Arena in Queens on Tuesday night, Marvin Clark II walked to the center of the court and stood in the middle of the team’s red logo.

He faced a crowd of more than 5,000 people, including the tennis legend John McEnroe, and waved his arms to stoke the cheers.

Like many of the St. John’s men’s basketball players this season, the 6-foot-7 Clark had seen this sort of thing done before — in other places. He played in a Final Four for Michigan State and Coach Tom Izzo in 2015, notching 10 minutes as a freshman when the Spartans lost to Duke. After his sophomore year, he transferred to St. John’s, where he believed he could play a larger role.

Mission accomplished. On Tuesday night, Clark scored 22 points and grabbed 7 rebounds in an 89-69 win over No. 16 Marquette, the most impressive victory this season for Coach Chris Mullin’s resurgent team, which is 13-1 over all entering an early Big East matchup with Georgetown (11-3) on Saturday in Washington.

“Coming here, leaving a storied program like Michigan State University, a Hall of Fame coach like Coach Izzo, that’s a big risk, a big gamble,” Clark said of his transfer. “I felt like I could do what I’m doing now. I felt like I had the ability to do it, I just needed a coaching staff to believe in me.”

Relying on transfers is not unique in today’s college basketball world. Kansas and Nevada, who are ranked in the top 10, rely on transfers for key roles. But St. John’s has taken the transfer trend to an extreme. Eight of the 13 players on scholarship this season, including Clark, are transfers from other Division I universities or from junior college. Four St. John’s starters are transfers: at forward, Clark and L.J. Figueroa; at guard, Heron and Justin Simon. Against Marquette, the four combined for 61 points. 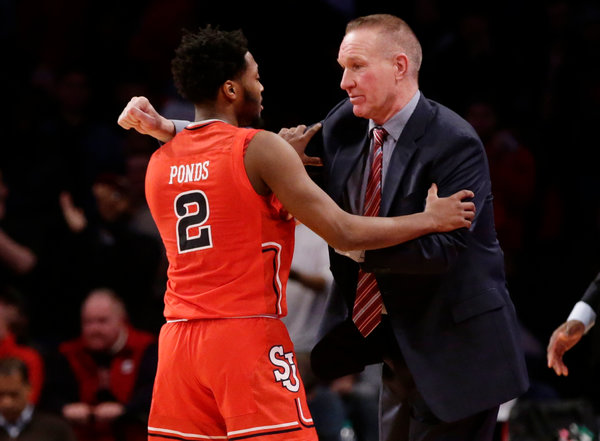 The Red Storm even added another transfer last week. The former North Carolina State big man Ian Steere joined the program at the semester break and will be on next season’s roster. St. John’s has also secured a verbal commitment from a junior college transfer, Valdir Manuel, for 2019-20.

“We’ve brought in players who were at great programs playing for some great coaches, so I believe that’s an advantage,” Mullin said. “Our transfers are a little more locked in, open-minded and accountable.”

Transfers from other Division I institutions must sit out a year, unless they receive a waiver, like the one Heron, a former Auburn shooting guard, received. Heron, whose hometown is Waterbury, Conn., was granted a relief waiver to play immediately this season after arguing that he was transferring closer to home to be near his ailing mother. Junior college transfers are eligible immediately.

Transfers bring maturity and experience, and can quickly turn a bad program into a good one. At St. John’s, the recent emphasis represents a cultural shift from when Mullin starred at St. John’s in the 1980s. The 1984-85 team he led to the Final Four consisted almost entirely of players from New York and New Jersey who began as freshmen.

The N.C.A.A. reported last month that about 40 percent of men’s basketball players who enter Division I directly out of high school depart their initial school by the end of their sophomore year.

At St. John’s, the assistant coach Matt Abdelmassih receives credit for building much of the current roster through transfers. Abdelmassih was an assistant at Iowa State under its onetime coach Fred Hoiberg. That team reached the round of 16 of the N.C.A.A. tournament in 2015 with a roster that included half a dozen transfers. Several went on to play professionally. Abdelmassih uses that as a recruiting tool. He tried recruiting Clark to Iowa State, and had Hoiberg not left for the Chicago Bulls, Clark might have landed there. When Clark opted to leave Michigan State, Abdelmassih targeted him for St. John’s.

“I wouldn’t say we were the first team to take transfers because that’s been going on forever,” Abdelmassih said. “But I think we were definitely one of the first at building almost an entire roster with the makeup of taking transfers. And it put us on a national stage.”

Abdelmassih, who landed at St. John’s in 2015, said he likes the attitude that transfers bring, and it also helps him avoid some of the drama that can sometimes surround high-level high school prospects. He said the transfers often come in with a chip on their shoulder and more humility than freshmen.

Entering this season, Mullin was 40-60 at his alma mater through three years, and his teams had never finished better than eighth in the Big East. This year, the Red Storm were picked fourth, and many expect them to be an N.C.A.A. tournament team.

“The fact that Marvin Clark and Justin Simon are guys who played at really good programs before and now have gone to play for another good program, I think it’s the reason they’re 13-1 and their shooting percentages are off the charts and they’re as good as they are,” Seton Hall Coach Kevin Willard said.

Villanova Coach Jay Wright noted that Mullin was showing he could bring in older players from elsewhere and meld them into a cohesive unit heading into the most important months of the season.

“You’ve got veteran college basketball players who have had success together starting conference play,” Wright said. “It’s a really well done job on Chris’s part of being patient and getting these guys ready for the season.”

Now Clark is dreaming of a return to the Final Four. “It would immortalize this team forever in New York folklore and it would definitely get this program back to where it needs to be,” he said.