When Cate Campbell floated the idea that Olympic athletes should be given priority access to a COVID-19 vaccine if it kept the embattled Tokyo Games afloat, the reaction was largely predictable, mostly centred on a view of entitled athletes who felt they had a right to saunter to the front the queue.

Aside from the entrenched and, largely, inaccurate stereotype that our Olympic athletes are drowning in millions of dollars (the vast majority do it for love, not money), that wasn’t quite what Campbell was suggesting. An athlete leader, the swimmer said if there was room in the latter waves of the vaccine rollout, then it wasn’t unreasonable that Olympians be granted access to the jab, given what was at stake. 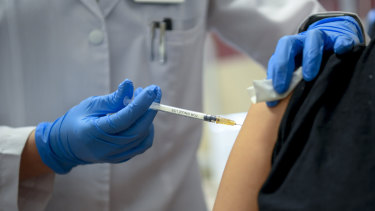 COVID vaccines could be the holy grail for sports trying to operate under the pandemic.Credit:AP

Her comments were made only a few weeks ago and, at the time, they perhaps felt a touch presumptuous. Now, with sports openly approaching governments for fast-tracked vials of the good stuff, they seem decidedly subtle. The debate about where sport lies in the vaccine power rankings is roaring.

Already in the US, the National Hockey League has offered to pay for vaccines for its 750 players, assuming there were doses available for purchase. Closer to home, Cricket Australia has asked whether national players could be vaccinated before the late February tour of South Africa, where new and dangerous strains of the virus are circulating.

And the NRL has asked the federal government if its players could be included in the third phase of the rollout, which would group them with about 500,000 critical workers. ARL Commission chairman Peter V’landys, too, insists they don’t want to ‘jump the queue’ but it should surprise nobody he hasn’t been backwards in coming forwards.

On the face of it, the answer should be a blanket ‘NO’. Athletes, rich or poor, famous or anonymous, should get zero special treatment as billions of people in need around the globe wait to be vaccinated against a virus that has shattered the norms of our society.

That’s not even scratching the surface of the ethical minefield that surrounds the idea of buying vaccines privately, which would simply allow the wealthy to leap ahead of the curve while the rest of us twiddle our thumbs.

Yet when it comes to sport, the argument isn’t so clear cut, given the welcome distraction it has been for countless souls around the world during the most difficult of times. Sport’s absence during COVID-19 lockdowns reinforced to many of us what a welcome and wondrous distraction it provides on a regular basis.

The debate about how India were faring in their bio-bubble during a long and difficult tour of Australia showed the average fan has little sympathy for well-paid athletes. There tended to be a ‘suck it up’ reply to India’s grievances, which probably made their “Miracle at the Gabba” even sweeter.

The NRL and AFL teams, especially those away from friends and family, could sense that tone in our recent domestic seasons and took their lot with good grace. But that doesn’t mean players didn’t make immense sacrifices for our entertainment; teams like the New Zealand Warriors did not see loved ones for months just so the show could go on.

In that case, would it be so outrageous for a comparatively small number of doses to be set aside so our traditional winter fare could be served up? That’s a political football you suspect Scott Morrison won’t be cradling for a photo opportunity.

By far the most intriguing case of the sport and vaccine debate belongs to the Tokyo Olympics. Other sports have proven they can operate, to some degree, in the age of COVID-19. Last year’s Games were the pandemic’s biggest sporting casualty and Tokyo has everything riding on a successful staging in the northern hemisphere summer.

The International Olympic Committee has already said the Games can be held sans-vaccine and athletes won’t be compelled to have had shots to compete. But behind closed doors, the IOC has already started a softly-softly approach to the World Health Organisation to secure enough vaccines for every Olympic athlete before the Games.

With veteran IOC member Dick Pound testing waters he found rather hot by saying he saw little wrong with Olympic athletes being shunted up the line, if it made the difference between sending teams or not, the IOC has wisely made its public stance in line with public health guidelines.

But with billions of dollars at stake, it knows the value of having a COVID-free athlete cohort for a Tokyo Games it can’t afford to be cancelled.