SPECIAL REPORT: FIFTEEN top-flight stars fail drug tests but not ONE is banned, as 88 footballers in Britain return positive samples – but details of cases are withheld

At least 15 Premier League footballers failed drugs tests between 2015 and 2020, The Mail on Sunday can reveal, and none of them was given any kind of ban.

Twelve of those tested positive for banned performance-enhancing substances, with one still being investigated five months after the initial test and no sanction having been issued.

In total 88 footballers from England, Wales and Scotland failed doping tests, returning ‘adverse analytical findings’, when drug-tested between 2013 to 2020. 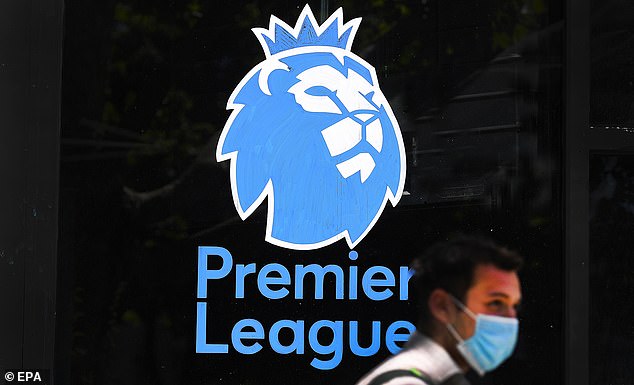 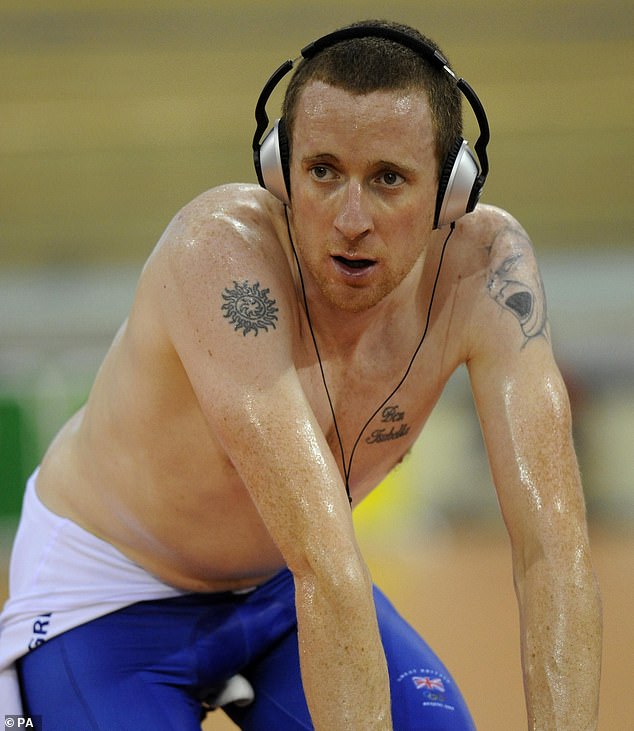 The revelations can only now be published after The Mail on Sunday made a series of Freedom of Information requests which took three times longer than they should have to be processed by the UK Anti-Doping agency (UKAD).

The dozen cases of performance-enhancing drugs included one positive test for an amphetamine and three findings of triamcinolone, the corticosteroid that Sir Bradley Wiggins used to treat hay fever before his Tour de France victory.

The Premier League cases also included four positives for the stimulant Ritalin and one for the testosterone booster Human Chorionic Gonadotropin (HCG), a hormone often abused in cycling and mixed martial arts.

The remaining top-flight positives were for the steroids prednisolone and a derivative, as well as the diuretic indapamide, which can aid weight loss and serve as a masking agent for other banned substances.

None of the cases led to doping bans, with UKAD saying a decision not to sanction was typically down to accidental ingestion or the player having a Therapeutic Use Exemption (TUE).

Only 39 of the 88 positives were itemised by UKAD in response to a Freedom of Information requests by The Mail on Sunday. Fifteen of the 24 non-Premier League players ended up with bans ranging from three months to four years.

UKAD declined to itemise the other 49 cases for a variety of reasons, including the Football Association telling UKAD ‘it would not be acceptable’ to release details on cases involving social drugs that are banned by the World Anti-Doping Agency but not by the FA.

Other reasons cited for withholding details included protection of minors, and that the release of other information might compromise UKAD’s investigative functions.

The Premier League finding for HCG came in the second half of the 2019-20 season. A sportsman can test positive for this as result of a tumour, such as testicular cancer. 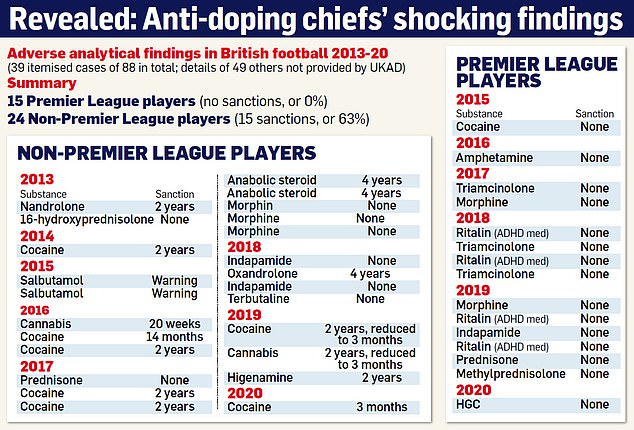 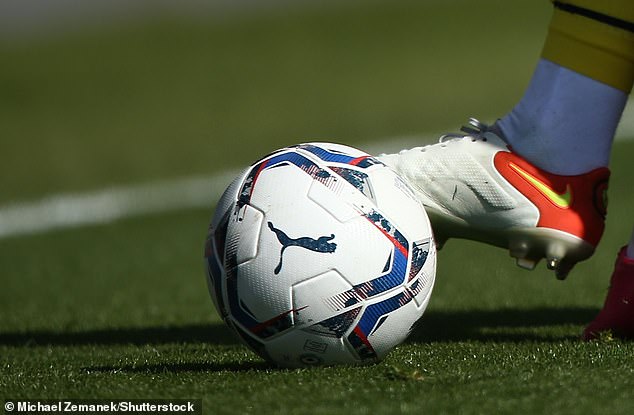 When an athlete is informed they have tested positive, they are advised to undergo tests to ‘promptly’ rule out a medical condition as the source of their failed drugs test.

But The Mail on Sunday understands that UKAD and the FA were still investigating this player at least five months after the positive drugs test. This player has not been sanctioned.

In October 2019, a 15-year-old child registered to a Premier League club was found with a banned human growth hormone-dispensing pen and was banned for nine months.

It must be assumed the three players who tested positive for triamcinolone had TUEs in 2017 and 2018. None was sanctioned.

Triamcinolone is an anti-inflammatory drug that can, for example, be injected locally to treat knee injuries. However, it can be used as a performance-enhancing drug by a non-injured athlete.

Wiggins used the drug legally after acquiring a TUE, although a parliamentary investigation found the Briton had crossed an ‘ethical’ line.

Players tested positive for Ritalin in 2018 and 2019. It is used to treat ADHD — attention deficit hyperactivity disorder — but it can also enhance performance.

The positive result for indapamide was returned in 2020 while those for prednisolone and the derivative methylprednisolone came a year earlier, and the amphetamine case was in 2016.

The Mail on Sunday submitted the Freedom of Information request in January and it should have taken 20 working days to be processed. The findings actually came back last week, after 60 working days. 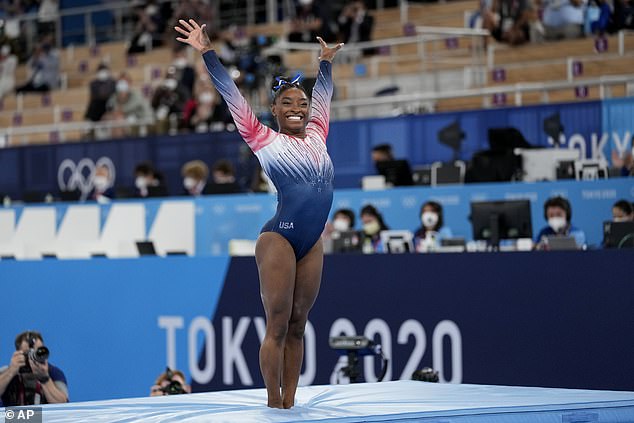 In 2016, it was revealed that Simone Biles, the four-time Olympic gold-medal-winning gymnast (pictured), had a medical exemption to take Ritalin to treat her ADHD 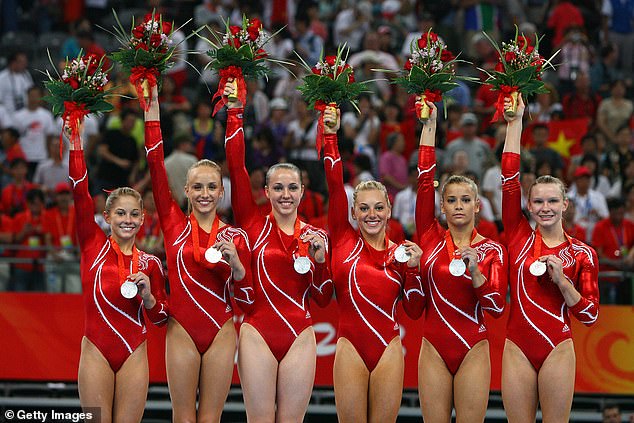 Yet in 2020, her fellow US gymnast Shawn Johnson (left), a 2008 Olympic gold medallist, said she had been prescribed Adderall, another ADHD medication, by the USA Gymnastics official doctor to help ‘lose more weight, have more energy’ and be more successful at gymnastics

UKAD worked with the FA to provide this newspaper with a six-page explanation of what they could and could not share, plus an itemised list of 39 cases.

The Premier League are understood to be comfortable that all 12 ‘performance-enhancing’ cases had innocent explanations, hence no punishments from UKAD or the FA, the bodies that police drug testing.

Corticosteroids such as triamcinolone have led to bans in other sports despite athletes claiming they had taken them to treat an injury. One such case in 2004 involved a low-ranking Spanish tennis player Luis Feo Bernabe, who tested positive for the corticosteroid betamethasone.

His defence was that he had been given the substance to treat ‘muscular pains’ while ‘under the supervision’ of a Spanish doctor, Ramon Cugat. Bernabe was eventually informed he had ingested the prohibited substance and was banned for two months by tennis authorities.

Dr Cugat was described by Manchester City manager Pep Guardiola as the ‘best doctor in the world’ after treating Kevin De Bruyne for a knee injury in 2018, and has also treated Barcelona and City players including Sergio Aguero and Xavi.

Like corticosteroids, ADHD medications have therapeutic uses but, because they are stimulants, they can also be used to increase performance. The case of two US gymnasts highlights how difficult it is to differentiate between legitimate and illegitimate use.

In 2016, it was revealed that Simone Biles, the four-time Olympic gold-medal-winning gymnast, had a medical exemption to take Ritalin to treat her ADHD.

Yet in 2020, her fellow US gymnast Shawn Johnson, a 2008 Olympic gold medallist, said she had been prescribed Adderall, another ADHD medication, by the USA Gymnastics official doctor to help ‘lose more weight, have more energy’ and be more successful at gymnastics.

UKAD did not reveal if the four Premier League players who tested positive for Ritalin were ever charged with an anti-doping offence. They were not sanctioned.