THE last big race of the season takes place in Hong Kong on Sunday.

And at Sha Tin Exultant will be the name on everyone's lips as he looks to win yet another Group 1 in the feature at 9.05. Here's your runner-by-runner guide to the almost £1 million Standard Chartered Champions & Chater Cup. 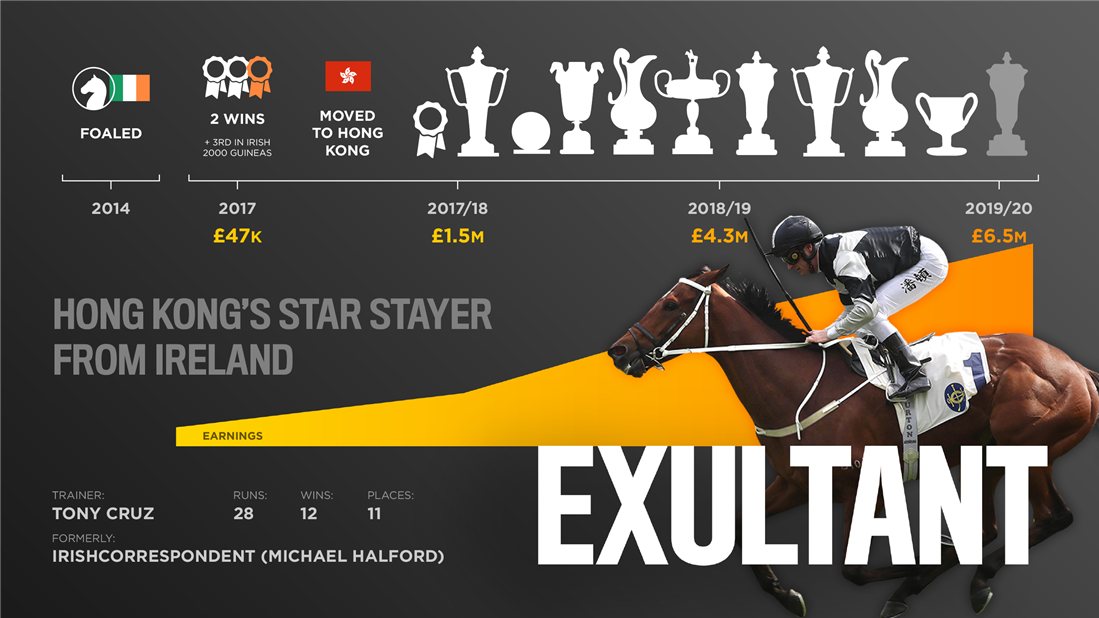 Tony Cruz's star will be all the rage ahead of the mile-and-a-half feature as he looks to make it five top level wins since moving from Ireland.

His CV is starting to sparkle and another win in this race will be the perfect end to the season for the six-year-old.

He is as consistent as they come without being a superstar, and has been beat at 1-5 and 4-5 this season, both times at the top table.

But the competition is weaker here, even if his running style can leave him vulnerable at times.

The odds will be firmly in his favour, and expect him to finish fast and late from stall seven under Zac Purton. The small field should aid in terms of traffic and Purton will be wary to let nothing get away.

Forecast betting may be the way to go here.

"He’s a real turf galloper, he loves the mile and a half.

"The first year he ran in it, he was only a four-year-old but last year you could see he was stronger, more mature, and he was easily the best horse. He’s in good form again this season, he’s the champion stayer, so I can see him winning it again.

"I don't want a downpour, that’s my concern,” Cruz said. “As long as the track is good to firm, as normal, Exultant should win this race again. But I want that normal track!"

The danger to Exultant comes from his own ranks and stablemate Furore.

He got within a length of Exultant last time out over ten furlongs and was closing at the line. But the distance probably flattered Furore somewhat and he has a bit more to find than that margin suggests. The handicapper has it at 9lbs.

That's a big gap to bridge and it'll take the step up in trip to work wonders for there to be an upset on the cards if the favourite is on song.

He can't be ruled out, but Cruz will have to have brought out plenty of improvement in him on his third start for the team.

He hasn't won in nine starts and it might prove wise to look elsewhere for place purposes.

The Hong Kong hero that is Time Warp is the last of the Cruz trio in here as the trainer attempts to win his seventh renewal from the last eight.

On paper he'd be the least likeliest of the three to get heavily involved in the finish, but he does have a Group 1 to his name as recently as February.

It took a wonder ride from Joao Moreira that day to come out on top and he could take the field along again here. Pulling the same magic off again may prove harder over the mile-and-a-half.

If you want to have a swing at a bigger price, he'd be the play for win purposes with your fingers well and truly crossed that Schofield can catch a few of his rivals napping.

OFFER OF THE DAY – PADDY POWER

New Customers get a risk free £20 bet. If your first bet loses, you will be refunded in CASH! CLAIM NOW

T7Cs: New customers only. Place your FIRST bet on any sportsbook market and if it loses we will refund your stake in CASH. Max refund for this offer is £20. Only deposits made using Cards or Apple Pay will qualify for this promotion. 18+ T&C's apply Begambleaware.org

Hong Kong legend is throwing four darts at this final Group as he attempts to bow out on a high before he moves Down Under.

Eagle Way didn't look to see out this trip last time out but the seven-year-old gives it another crack here. His best performances have come over shorter for a while now.

His last win came in November 2018 and he doesn't strike me as the winner here.

Chefano arguably ran a career best last time out, when trying this trip for the first time.

He'll enjoy the rain they may get and he could challenge Time Warp for the lead.

You cannot rule this horse out in a Group 1 lacking depth and despite his trainer saying his better chances may lay elsewhere. Pay attention to him in the betting.

John Moore on his four runners

"If the pace is genuine, I think Savvy Nine and Helene Charisma would probably be my stable picks and Chefano should like the cut in the ground too. Helene Charisma will definitely enjoy it and Savvy Nine, I can't see any reason why he won't enjoy it – they’ll think they’re back at Longchamp or something.

"If the favourite doesn’t come with his ‘A Game’ at the weekend, we come right there with all guns blazing. It would be great to depart Hong Kong on a Group 1 win and as far as I’m concerned we have a great chance of doing that."

It'd be hard to make too strong a case for this horse on current form, but if you trek far enough back through the form there is some encouragement.

The trip is no issue and the rain would be welcomed with open arms – not many horses get that comment in Hong Kong.

Saying that, he should be out-classed by the fancied horses in this. It would be some upset.

Moore has been wise and left as many in this as possible with the small field and unpredictable forecast.

Savvy Nine is another who would prefer some give in the ground and he may just get that.

Moreira will have his work cut out to win in a truly run race on a sound surface, but the lack of runners and pace could mean the rule book goes to waste and Moore knows that.

"I think this kind of surface affects probably 65 to 70% of the horses negatively and he’s one of the other 30 or 35% that just gets better on it.

"He went 2400 metres (1m4f) last time so I’m not worried about the distance – I think he was needing the run last time and now he should be right there. Exultant’s the horse to beat, there’s no doubt about that, but I have to keep the faith and I think my horse has done nothing wrong."

Tote: Pool betting available on all races from Hong Kong through our betting partners.