When the NFL regular season ends, a new season immediately begins. The postseason? No, not yet. First comes the brief but brutal annual season of firing coaches.

Four teams dismissed their coaches on Monday (local time): Marvin Lewis was fired by the Cincinnati Bengals, Vance Joseph by the Denver Broncos, Steve Wilks by the Arizona Cardinals and Adam Gase by the Miami Dolphins. 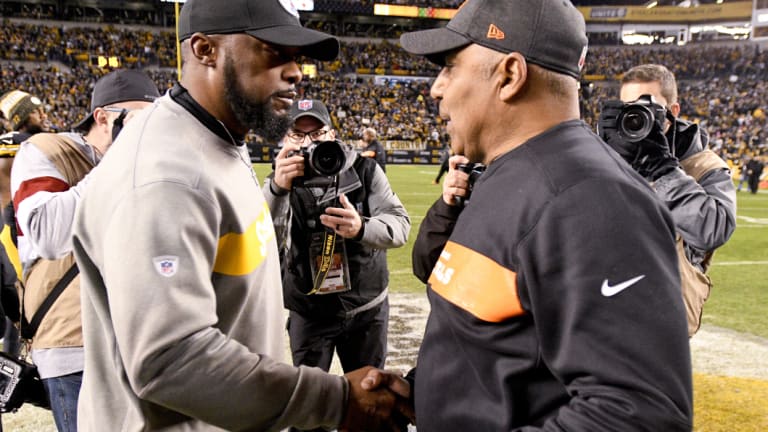 Marvin Lewis (right) was among the victims of the NFL coaching sacking spree.Credit:AP

News of the four firings came out in a short window, a particularly ugly hour or two for the members of the NFL coaching fraternity.

Joseph, Wilks and Lewis are black, leaving the number of black head coaches in the NFL at two, Anthony Lynn of the Los Angeles Chargers and Mike Tomlin of the Pittsburgh Steelers.

Lewis leaves the Bengals after 16 seasons – a franchise record. Only Bill Belichick of the New England Patriots (19 years) has been at the helm of an NFL team for longer.

Lewis' tenure included seven playoff appearances, but he lost all seven of those games and just completed a third straight losing season, at 6-10. He was hamstrung in part by an injury to quarterback Andy Dalton that put Jeff Driskel in the starting lineup.

Perhaps more important to Bengals fans: Lewis never managed to lead his team out of the long shadow of the archrival Steelers in the AFC north. His regular-season record against Pittsburgh was 8-24.

Joseph took over a Broncos team that had made the playoffs in five of the previous six years and was two years removed from a Super Bowl win. But he was unable to help the team navigate the transition to the post-Peyton Manning era.

The Broncos were 5-11 and 6-10 under Joseph, their first back-to-back losing seasons since 1971-72. Case Keenum was far from the answer at quarterback, putting up average numbers on his good days and finishing second in the league in interceptions.

After a 6-6 start that kept them in playoff contention, the Broncos lost four straight to finish the season, falling consecutively to the San Franciso 49ers, the Cleveland Browns and the Oakland Raiders, hardly a murderer's row of foes.

Wilks' only season with the Cardinals ended with a 3-13 record, the team's worst since 2000. The Cardinals were in the NFC championship game three seasons ago, and had 7 and 8 wins in the subsequent seasons.

The team struggled this year behind a rookie quarterback, Josh Rosen, who was unable to take the league by storm as his classmates Lamar Jackson of the Baltimore Ravens and Baker Mayfield of the Browns did.

The Dolphins made the playoffs in the first of Gase's three seasons but were 6-10 and 7-9 the next two years. The once proud franchise has three playoff appearances, and no wins, since 2000.

The Jets and Buccaneers did not even wait until what has become known as "Black Monday" to announce they were going in a new direction, dispensing with Todd Bowles and Dirk Koetter.

Bowles was 23-40 in four seasons with the Jets, including a 4-12 record this season.

Koetter had three seasons with the Bucs, who went 5-11 this year.

The top jobs are also open at the Green Bay Packers and the Cleveland Browns, who appointed interim head coaches during the season.

The top jobs are also open at Cleveland and Green Bay where, earlier in the season, Hue Jackson and Mike McCarthy were fired.

That leaves at least eight teams looking for a new head coach to lead them to the promised land.

McCarthy has already been mentioned as a candidate for several of the open jobs.

The New York Times, with Reuters