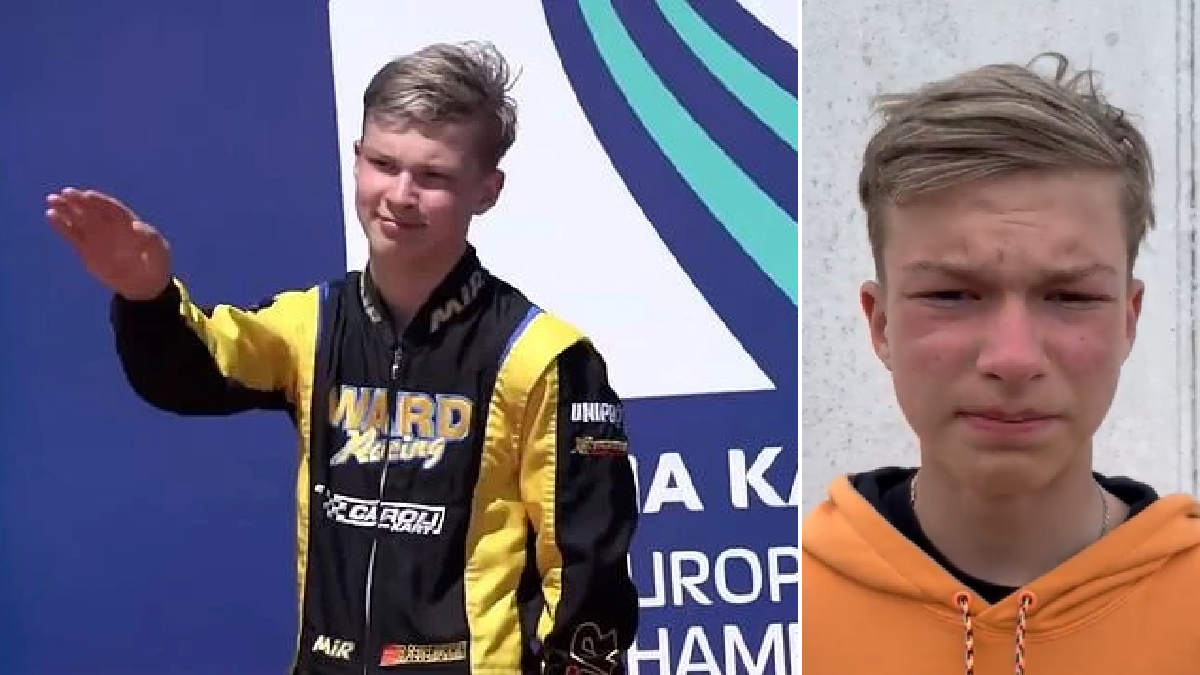 A Russian go-karting champion has apologised after appearing to make a Nazi salute following a European Championship race and been sacked by his team.

Artem Severiukhin, 15, competed in Portimao, Portugal on Sunday under an Italian flag because the International Automobile Federation (FIA) has banned Russian competitors amid the ongoing invasion of Ukraine.

After winning the race, Severiukhin struck his chest twice with his fist before extending his right arm on the podium. He then burst out laughing.

In a video uploaded to social media, the teenage go-karter apologised for his ‘foolish’ behaviour but denied making a Nazi gesture.

‘I want to apologise to everyone for what happened at the European Championship go-karting race,’ he said.

‘Standing on the podium, I made a gesture that many perceived to be a Nazi salute. It’s not true, I have never supported Nazism and consider it one of the worst crimes against humanity.

‘I know I’m a fool and I’m ready to be punished, but please believe that there was no intention in my actions and it was not a support to Nazism.’

In a statement released on Monday, the FIA said it had ‘launched an immediate investigation into the unacceptable conduct of Mr Artem Severiukhin that occurred during the podium ceremony’.

NEWS | ð·ðº Russian karting driver Artem Severiukhin has reacted on Telegram to the incident where he allegedly did a Nazi salute on the podium after a karting race. pic.twitter.com/lmY8aMgLQQ

Severiukhin’s Ward Racing team also said they had sacked him, writing on Instagram: ‘Ward Racing is deeply in shame of the pilot’s action.

‘On the basis of these considerations Ward Racing sees no possibility of continued cooperation with Artem Severiukhin and will proceed with terminating his racing contract.’

The Russian Automobile Federation are also looking into the incident, adding in a statement: ‘We consider unacceptable any, even an accidental, manifestation of fascism and Nazism in Russian motorsport and among Russian athletes.’