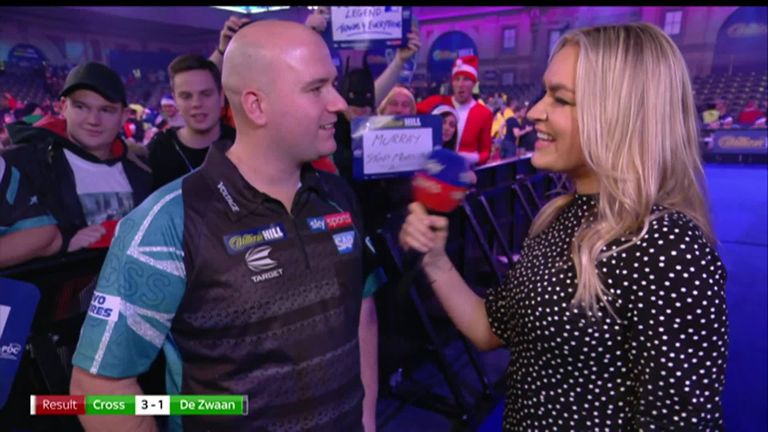 Defending champion Rob Cross kicked off the defence of his World Championship title with a 3-1 victory over Jeffrey de Zwaan in a thrilling second-round contest at Alexandra Palace.

A drama filled opening night, that had seen women’s BDO champion Lisa Ashton give Jan Dekker a scare, reached its dramatic conclusion in the final match as Cross was forced to dig deep and produce his very best to see off rising star De Zwaan.

The pair shared nine 180s and both averaged more than 102 – De Zwaan’s 106.09 average was the second highest losing average in the tournament’s history.

Cross arrived in north London defending a 100 per cent record in the tournament after his fairytale debut last year, and he needed to be at his best to account for De Zwaan, the World Matchplay semi-finalist who has proved himself a man for the big occasion. 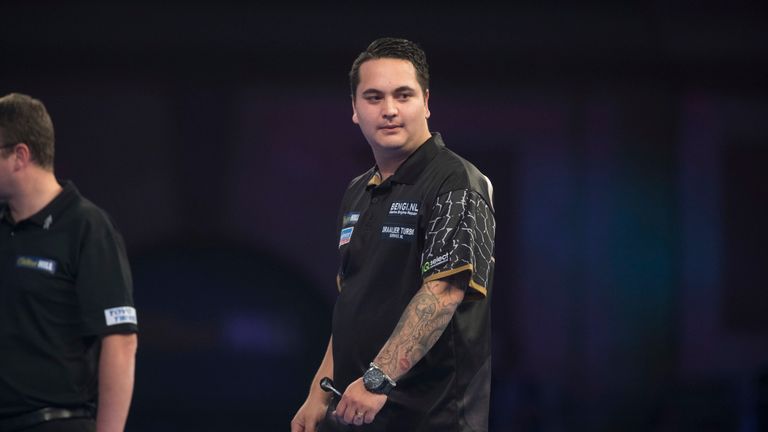 Having twice beaten Michael van Gerwen this year, the talented Dutchman started fast, taking the opening set with a huge 108 average. Incredibly he was able to maintain a high average but, somehow, Cross was able to find a way – hitting crucial doubles at the right time to win the next three sets and a place in the last 32.

World Championship Day One – as it happened 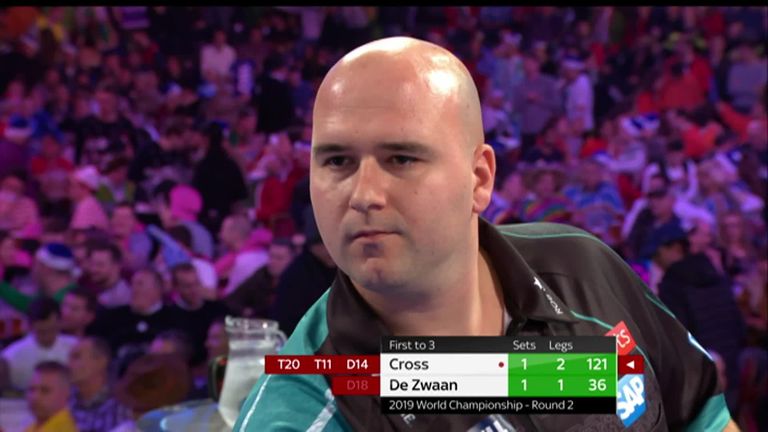 De Zwaan, who had accounted for Nitin Kumar earlier in the evening, roared out of the traps, and reeled off three successive legs to leave the champion reeling and facing a first defeat at Ally Pally.

Facing a 108 opening-set average, Voltage steadied himself and responded by finding the big scores himself, moving into a 2-1 lead only for De Zwaan to land six perfect darts in search of the first nine-darter of the tournament. The Dutchman could not complete the combination but levelled the set to force the decider.

Cross’ woeful start looked to have opened the door for De Zwaan, but showing all the fighting qualities that saw him survive multiple match darts on his way to last year’s title, he reeled off 140-140-96 to take the leg, move his average into three figures and, most importantly, level the contest.

With the pair matching each other in the scoring stakes it was coming down to doubles and Cross was near faultless, taking both chances to come his way on the return from the interval to forge a 2-0 lead. 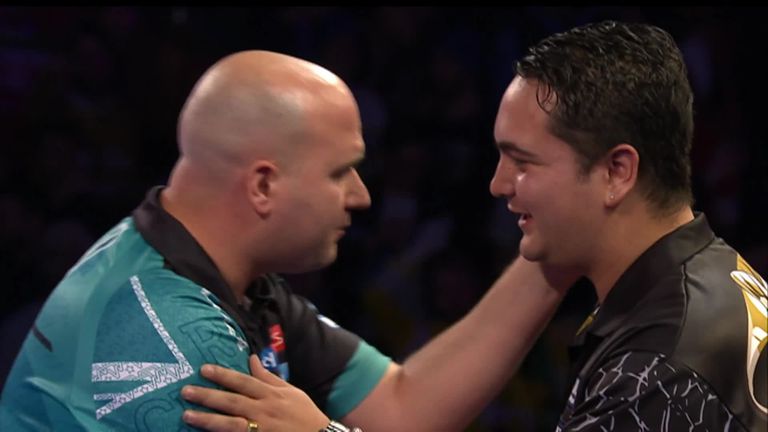 A missed dart at bullseye for a 124 finish gave De Zwaan a chance to halt the champion’s march. With De Zwaan sitting on a handy-looking combination, Cross needed a big finish and found it – this time he pinned the bull to complete a 121 for the set and a 2-1 lead.

Cross needed all three darts to finally find double five and level the final set before moving 2-1 up and De Zwaan then missed darts to force a decider, so it was the champion who became the first man into the third round. 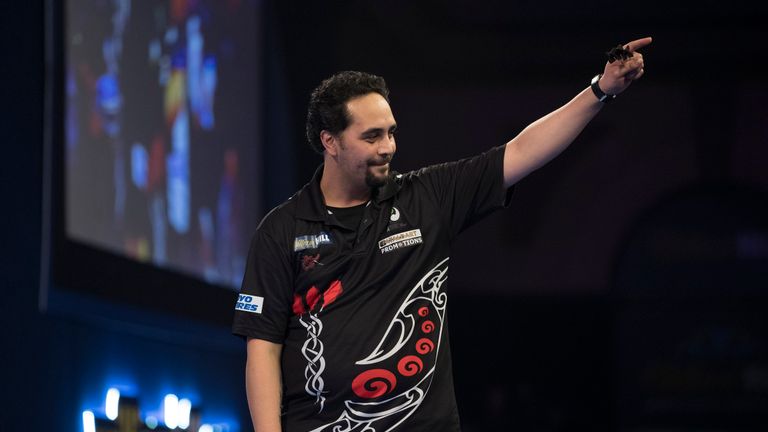 The New Zealander led 2-1 after dominating in the scoring stakes, before he imploded in a bizarre fourth set.

He went for the bullseye with two darts in hand on 50 in the penultimate leg of the set, before incredibly busting 134 in the following leg as Schindler forced a decider.

However, Harris recovered superbly, taking out finishes of 85 and 104 in successive legs to prevail and set up a meeting with last year’s semi-finalist Jamie Lewis on Friday afternoon. 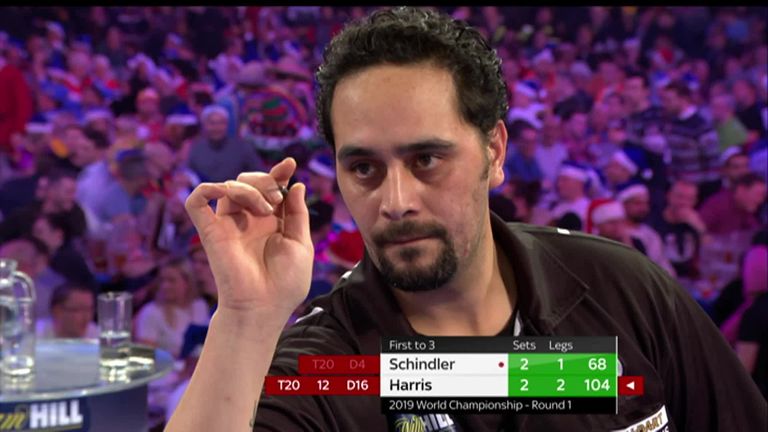 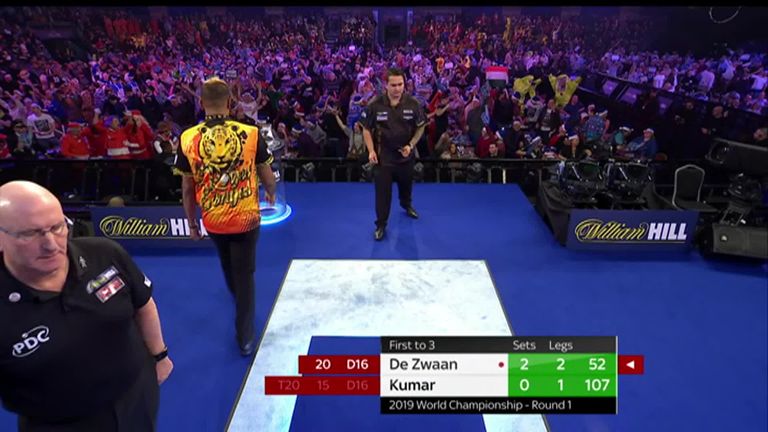 Earlier in the evening De Zwaan had little trouble in dispatching Indian qualifier Kumar who was making his World Championship debut.

The man from Coimbatore has twice represented his country at the World Cup but on his individual TV stage debut he was no match for De Zwaan who reeled off the first set with an average just under 100.

Missed doubles from De Zwaan allowed Kumar to pinch a couple of legs in the second set but De Zwaan maintained a three-figure average to take the set and stay in control, before sealing the win by taking three of the final four legs to set up his meeting with Cross.

You can follow every dart from every session of the World Darts Championships on Sky Sports Darts, coverage gets continues at 12.30pm on Friday with the afternoon action on Day Two – check out the full schedule here

July 15, 2020, Comments Off on Kanye West ‘DROPS OUT’ of election race against Trump after failing to get backing in Florida despite 180-strong team – The Sun

July 15, 2020, Comments Off on Inflation edges up to 0.6% as summer clothes sales fail to materialise
We and our partners use cookies on this site to improve our service, perform analytics, personalize advertising, measure advertising performance, and remember website preferences.Ok