SAN ANTONIO — Some teams fought, some teams flew and some teams fell on their way to at least another few nights in San Antonio for the N.C.A.A. women’s basketball tournament.

A Sweet 16 lineup that is rounding into shape is the result.

Oregon had to fight to earn the program's fourth appearance in the round of 16. Louisville, a No. 2 seed, had a comeback victory for its 10th.

Sixth-seeded Oregon’s 57-50 win over Georgia, a No. 3 seed, was physical, as the Ducks leaned on their height advantage to help them pass the ball efficiently over Georgia and, in some cases, cause the Bulldogs to turn the ball over.

Tied with Georgia at halftime, the Ducks capitalized on these bad-pass and dropped-ball turnovers to take a 7-point lead at the end of the third quarter. Taylor Mikesell scored on a fast break with a layup, followed shortly by Nyara Sabally doing the same with a jumper in the paint with just over three minutes left in the third.

Oregon shot 5 of 12 from beyond the arc, while Georgia made only one of its 13 3-point attempts. The redshirt sophomore forward Sedona Prince, who transferred from Texas after one season, led all scorers with 22 points. She said in a postgame interview that she could not have been happier to lead this team to the Sweet 16.

“I was looking for someone to take me with open arms and find happiness again, and that’s what I found,” Prince said through tears after the win.

Georgia had fought back in the fourth quarter, taking the lead with 4:21 left on a layup by guard Mikayla Coombs. With just over a minute left, Oregon solidified a 6-point lead on a layup and a jumper by Sabally. The Ducks sent Georgia’s Que Morrison to the free-throw line with 33 seconds remaining, but her 2 points were not enough.

Oregon stretched its lead on another set of free throws by Mikesell. The Ducks huddled on the court for a celebration following the game, the cheers of invited friends and family echoing in the background.

“Georgia is a heck of a team, and our Ducks did it. We pulled through,” Oregon Coach Kelly Graves said in a postgame interview.

No. 2-seeded Louisville beat No. 7-seeded Northwestern, 62-53, despite having its lowest scoring first half this year and trailing by 12 at halftime. But with a confidence boost from a 17-0 run in the second half, the Cardinals were able to come out on top.

The team has largely relied on guard Dana Evans, who had a rough start against Northwestern before finishing with 14 points of 5 of 17 shooting.

Indiana, a No. 4 seed, Missouri State, a No. 5 seed, and Maryland, a No. 2 seed, had easier times punching their tickets to the round of 16. 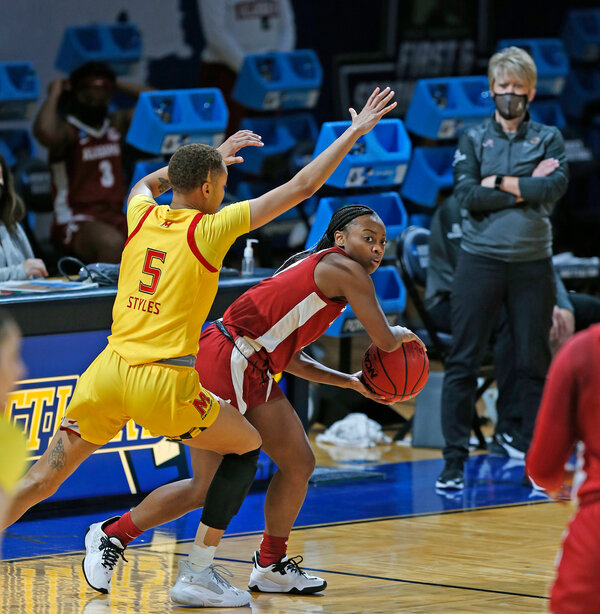 Indiana cruised to its first Sweet 16 appearance since the tournament was in a 32-team format in a 70-48 rout of Belmont, a No. 12 seed. It will also be Indiana Coach Teri Moren’s first trip to the round of 16.

Eyes were on Wright State, a No. 13 seed that had defeated No. 4-seeded Arkansas in a remarkable upset. But Missouri State stole the stage, avoided being the second team to be upset by Wright State and earned its second consecutive trip to the Sweet 16.

Wright State, which leaned heavily on its rebounding ability in its first-round game, was unable to maintain that streak. The Missouri State senior Elle Ruffridge matched a career high 20 points in the 64-39 win.

Now, eyes are on Missouri State. And rightfully so.

“You haven’t seen any highlights from our game in the first round, and you didn’t see anything about us going into this game,” Missouri State Coach Amaka Agugua-Hamilton said in a postgame interview. “The N.C.A.A. tweeted out Wright State’s picture. We handle a lot of disrespect, but it just fuels our fire.”

Agugua-Hamilton has already made history. She’s Missouri State’s first Black female coach of any sport; this is her first postseason.

Right before Missouri State put the game away, Maryland joined UConn and Baylor in the 100-point club with a 100-64 rout of seventh-seeded Alabama. This will be Maryland’s 14th appearance in the round of 16.

The Crimson Tide’s Jasmine Walker led all scorers with 23 points, but five Terps scored in double figures, led by 19 from the freshman Angel Reese, who injured her foot in her fourth game of the season. Faith Masonius, a sophomore, had a career-high 16 points.

“In an ironic way, when Angel got hurt, it allowed a lot of players to develop their plays,” Maryland Coach Brenda Frese said in a postgame interview. “Now, the longer we’ve played, it’s allowed Angel to get back in the fold.”

On Tuesday, all the No. 1 seeds — UConn, Stanford, South Carolina and North Carolina State — glided into their spots in the Sweet 16 along with Iowa, Michigan, Georgia Tech and Baylor. Three spots had yet to be filled as of early Wednesday night.

When the round of 16 starts Saturday, expect more crowd noise. Paying spectators will be allowed in person at the Alamodome, where the remainder of the women’s tournament will be played at up to 17 percent capacity.