For a while out there on a day of catch-up at the 84th Masters it seemed as if no one would be catching Dustin Johnson. The world No.1 strolled to 10 under after just four holes of his second round and, with that languid stride of his looking more nonchalant than ever, the rest were struggling to keep him in their sights.

But this is Augusta National and, despite the revered layout being more accommodating than ever over its opening stages, it reminded Johnson why he has so far found securing a green jacket for his locker so elusive.

After closing out for a first-round 65 and then birdieing all three holes on Amen Corner, Johnson dropped shots on both the 14th and 15th (his fifth and sixth) and only recovered well enough to post a 70 for a nine-under total. 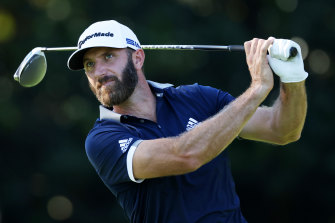 However, Johnson did hit a wonderful approach into his last hole to set up the closing birdie from six feet and regardless of his profligacy, the 36-year-old remains the man to beat.

Alongside fellow American Justin Thomas (69), Mexican Abraham Ancer (67) and Australian Cameron Smith (68), Johnson holds the clubhouse lead – with half the field coming back to complete their second rounds – but his challenge for a second major title was not looking so nearly as straightforward as it had been.

They are packing in behind. On seven under stand the English pairing of Danny Willett and Tommy Fleetwood. Both racked up seven birdies to go with solitary bogeys and, with Paul Casey, the first-round pacesetter, also on seven under after two holes of his second round, this was proving to be a rousing major for the St George contingent. 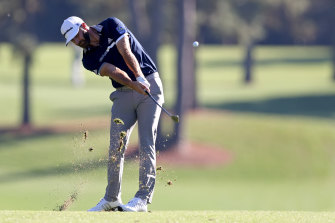 Justin Rose was another Englishman on the leaderboard, standing on five under with two holes remaining. Willett was the last British winner – in 2016 – and at the very least the country can surely hope to have a representative in contention. That could even be Rory McIlroy, who bounced back valiantly with a 66 to reach three under.

It was a torrid finale to McIlroy's first round as he returned to complete the remaining 10 holes after the thunderstorm delays of Thursday. Playing with Johnson and Patrick Cantlay – the world No.10 who is eight under following a 66 – McIlroy could not get up and down from the bunker on the 10th and then dropped further shots at the 13th, when hooking it violently into the trees, and 14th, after a woeful chip from over the back. There was a birdie on the 15th, but then he rather desperately pulled it into the water on the 16th.

He scrambled commendably for a bogey on that par three, but when he signed for 75, his worst opening score at the Masters, it appeared bleak. The quick turnaround meant he had little time to dwell on it and, with six birdies and no bogeys, he suddenly appeared a different golfer.

No, McIlroy would not have planned on being six behind Johnson at the halfway stage – and who knows, the deficit may be greater by the time he begins his third round – but he does have a chance to become just the sixth player in history to complete the career grand slam. And with Augusta set to get tougher, ground will be easier to make up. It will be a silent weekend, but it could also be thrilling as the greens get firmer and the National begins to bear its teeth. 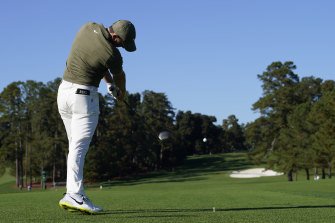 As it was, the second round was already proving more difficult than the first. The sub-air systems under the greens were drying out the putting surfaces rapidly and were being assisted by the hot conditions.

The greens were also "beat up" because of their softness and the six-footers were becoming tricky. As the task becomes increasingly more arduous, expect the first round to become like a mirage.

The stats show that Augusta National has never been easier. Out of a field of 92, there were 53 rounds under par in the first round, the most ever for any single Masters round. And with the players shooting an average of 71.41, this also set a new low for the opening round. So much for all those predictions that Augusta in November would provide a brutal test.

The truth is that if you put a soft course with soft greens in front of the modern professional, then they will tear it to bits regardless of how long it happens to be. Actually scrap that, because it was not just the modern professionals who laid siege to Alister Mackenzie's masterpiece. Never before had two players aged 60 or over broken par in the same round of a major. Step forward 62-year-old Larry Mize and 63-year-old Bernhard Langer, who shot a 70 and a 68 respectively.

After finishing off his remaining holes in one under to reach four under, Langer shot a 73 featuring four birdies and five bogeys to fall back to three under. 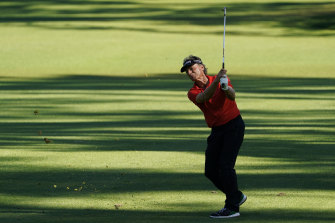 However, many of his juniors would have snapped his anchored arm off that for the score. Take Tyrrell Hatton, who as the world No.9 came in as the highest-ranked Englishman.

The 29-year-old struggled to a 73 and 74 for a three-over total and a second missed cut in four Masters appearances.

It has been a truly strange season for Hatton in the majors. He has failed to make it past the second round in all three of them, despite what he calls "a special year for me". There was the win at Wentworth at the BMW PGA Championship and before that, his first PGA Tour triumph at the Arnold Palmer Invitational at Bay Hill. It be will one of Hatton's main tests next year to fix this anomaly.