Like most Australian soccer fans, Alen Stajcic can still remember that sick feeling in the pit of his stomach. When Fabio Grosso tripped over prone Socceroos captain Lucas Neill back in June 2006, one of the most heartbreaking chapters in the country's sporting history was written.

More than a decade later, the opportunity has arrived for a little payback – in a roundabout way. Stajcic's Matildas will take on Gli Azzurri to open their campaign at next year's Women's World Cup in France. 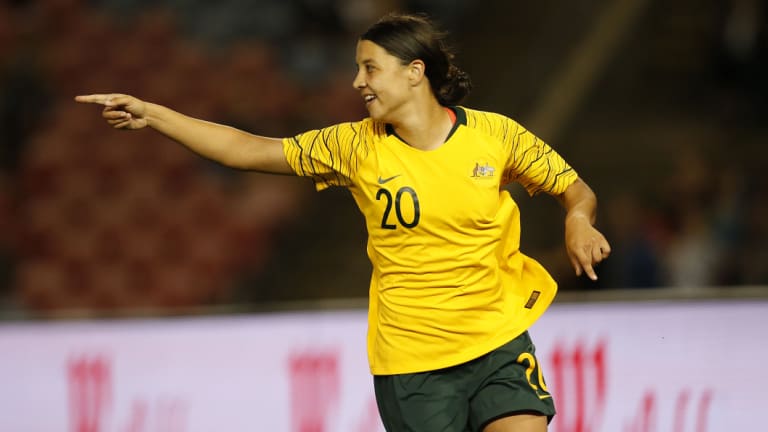 It will be the first time Australia has met Italy at any major soccer tournament since the injustice of Kaiserslautern, which is at the core of the mythology that has propelled the round-ball code forward in Australia over the ensuing years.

The match will take place in Valenciennes on Sunday, June 9 at the reasonably friendly timeslot of 9pm AEST. It shapes as a bonafide blockbuster, and the magnitude of the occasion plus the narrative behind it should prove irresistible for those stragglers who are yet to jump on the Matildas bandwagon.

"I certainly did reflect back to that game in 2006 and the heartache that game caused our country – especially when the Socceroos were on the precipice of moving into the quarter-finals," Stajcic said after Australia drew Italy in Group C alongside Brazil and Jamaica.

"It's not as if we can take revenge for that moment, but I know I certainly feel a lot of emotion from that game and we'll be doing everything we can to win for our sake, for our team and for our tournament.

"There is, certainly within me, that little bit of hurt still from that game and hopefully we can do what we can to avenge that result."

The circumstances are, of course, vastly different in the women's realm. This time Australia will go in as the hot favourites with Italy expected to revert to their native 'catenaccio' tactics of defensive structure and pragmatism in their first Women's World Cup since 1999.

The Matildas have faced them before but only in friendlies. The Azzurri are ranked 16th in the world and Stajcic knows they will be no pushover, having watched them himself at the 2017 Euros.

Only two months ago, Italy defeated world No.9 Sweden 1-0, while the creation last year of a women's team by Serie A giants Juventus – for whom many of the national team's stars play – has added a professional edge to the country's domestic scene.

"That's going to be a real challenge for us in game one," Stajcic said.

Get through Italy and it's Brazil next. The Matildas were knocked out in the quarter-finals of the 2016 Olympics by the South Americans but have prevailed in each of their four meetings since and know their players and systems intimately.

Then it's minnows Jamaica. Stajcic doesn't have too much intel on the world No.53 "Reggae Girlz," but he'll have plenty to draw on once they meet in Australia's final group stage encounter.

Stajcic will spend the next few days on a reconnaissance mission, visiting match venues, hotels and possible training bases in France. Their draw will see them travel more than 1000km, from one end of the country to the other, between group matches but as he pointed out, it's nothing his players haven't done many times before.

Despite what he described a "rollercoaster ride" in 2018 – in which key players have been injured or rested, others trialled in new positions, and hiccups endured against the likes of Thailand, Japan and Chile – Stajcic believes the Matildas are ready to live up to the lofty expectations of them in France.

"The maturity and belief within the team has gone full circle. Now it's a matter of the approach within each game having the necessary focus and consistency to win each game and win each moment.

"If we're at our peak, there's no doubt in my mind we can be a genuine challenger for the title."