That era when United used to bucketloads of goals without getting out of third gear. 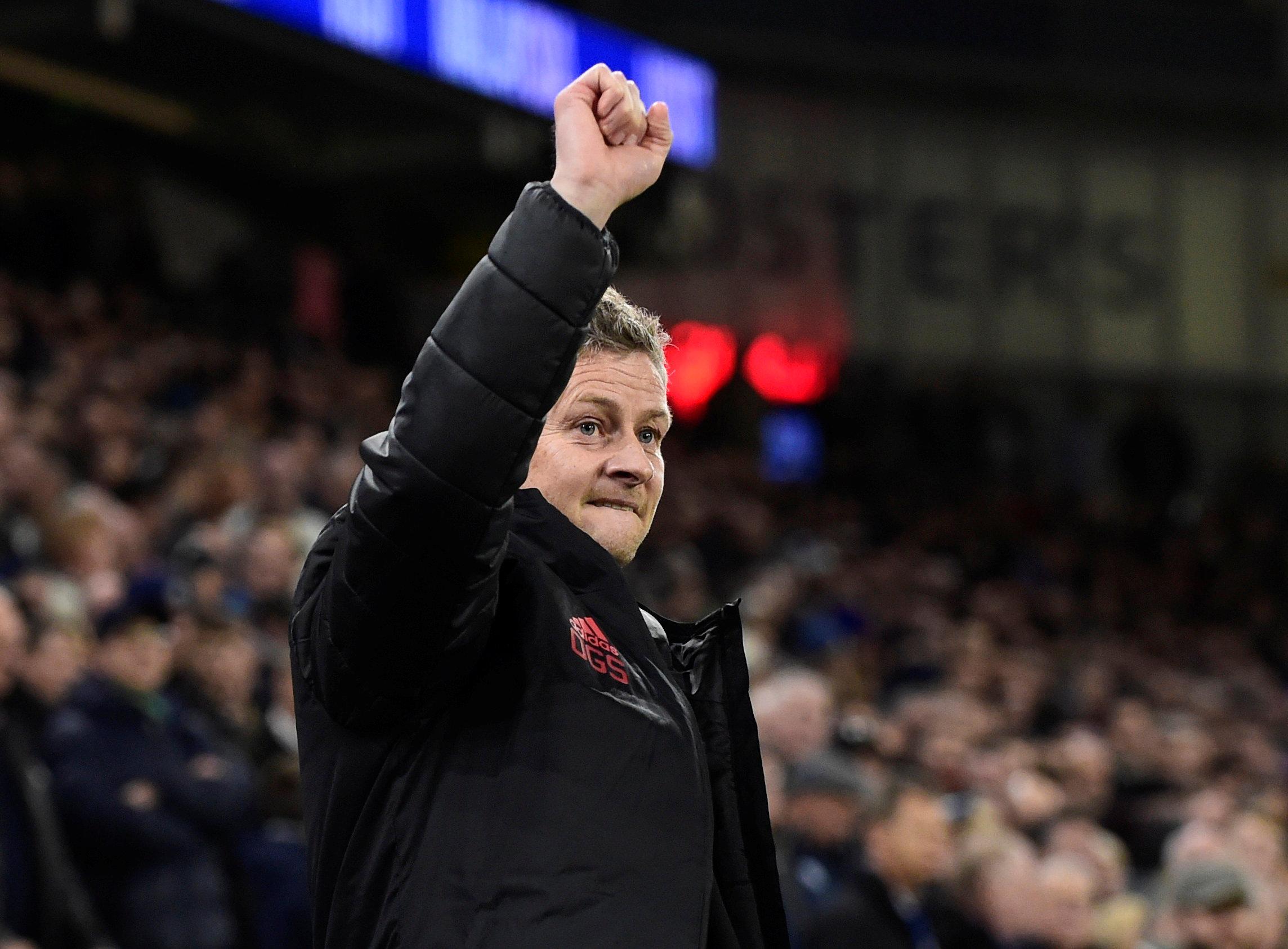 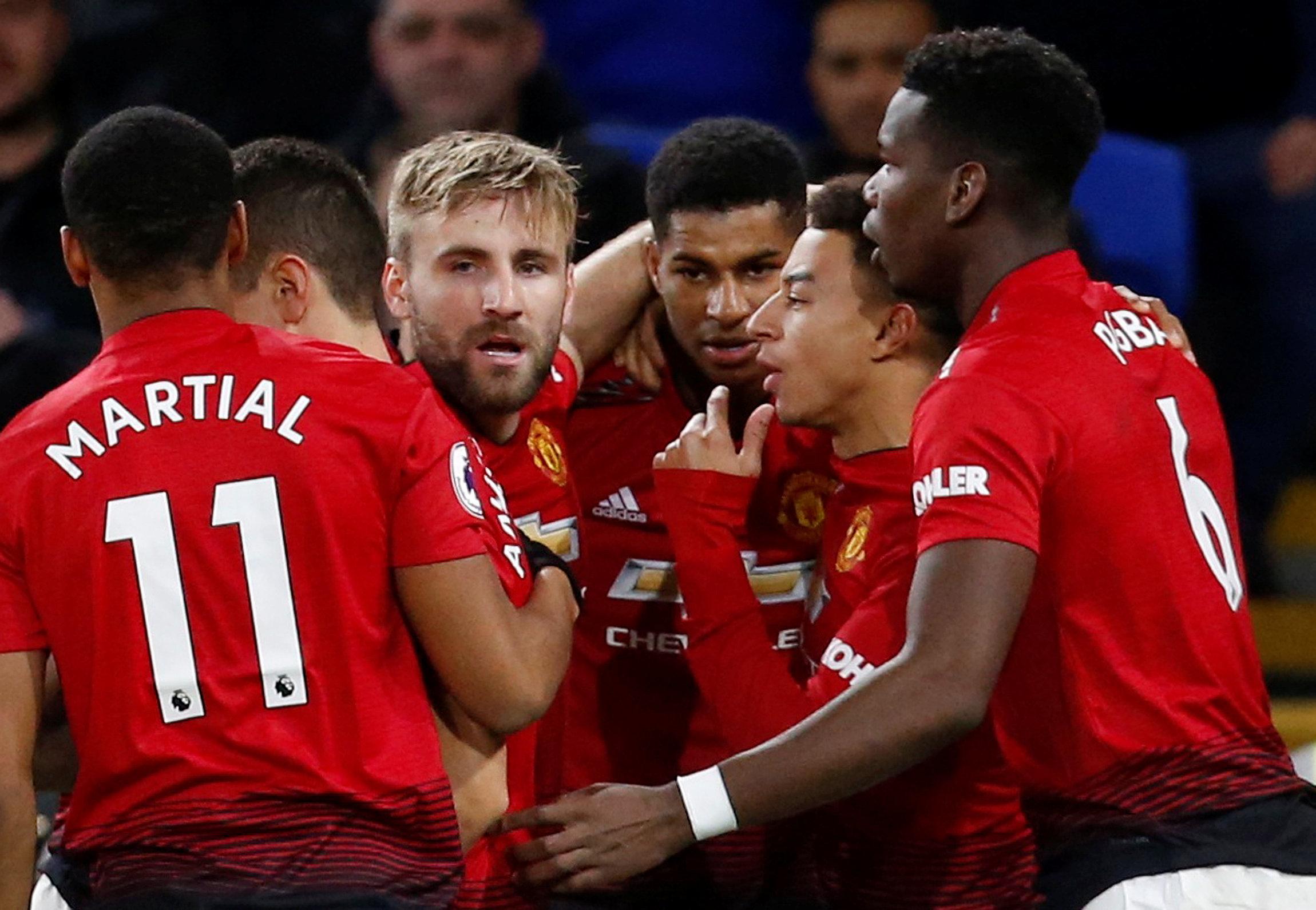 When opposing players would be desperate to hear the referee to blow the final to end their pain and humiliation.

In south Wales, it was Cardiff who were run over by a United juggernaut which has taken over five years to arrive.

It took just three minutes to exorcise the ghost of Jose Mourinho while transporting United fans back to the days of Alex Ferguson.

The last time United scored five goals in the Premier League was the bizarre 5-5 draw with West Brom in May 2013 – Ferguson’s final game as manager. Since then time, Manchester City have scored five goals or more on 21 occasions. 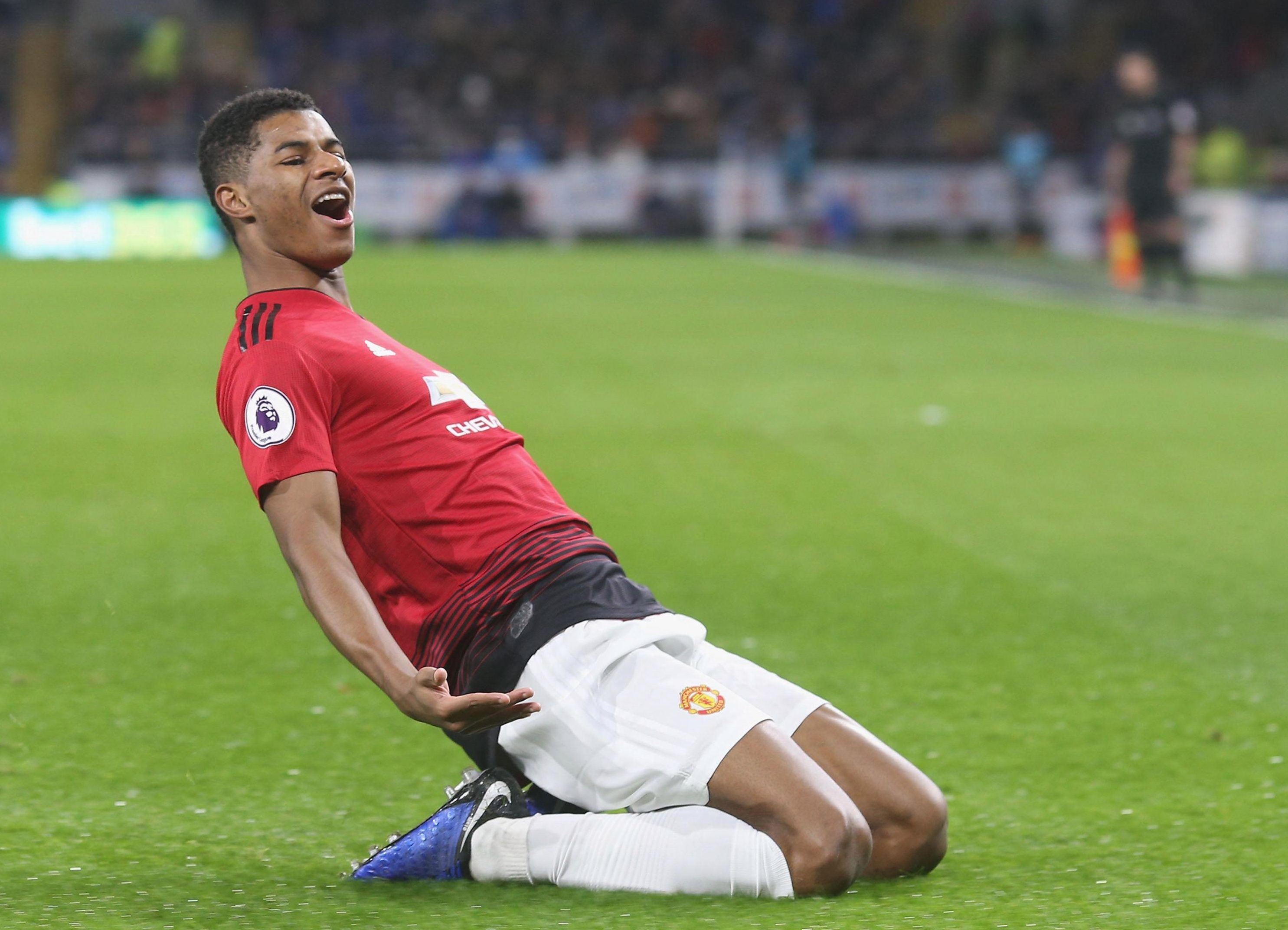 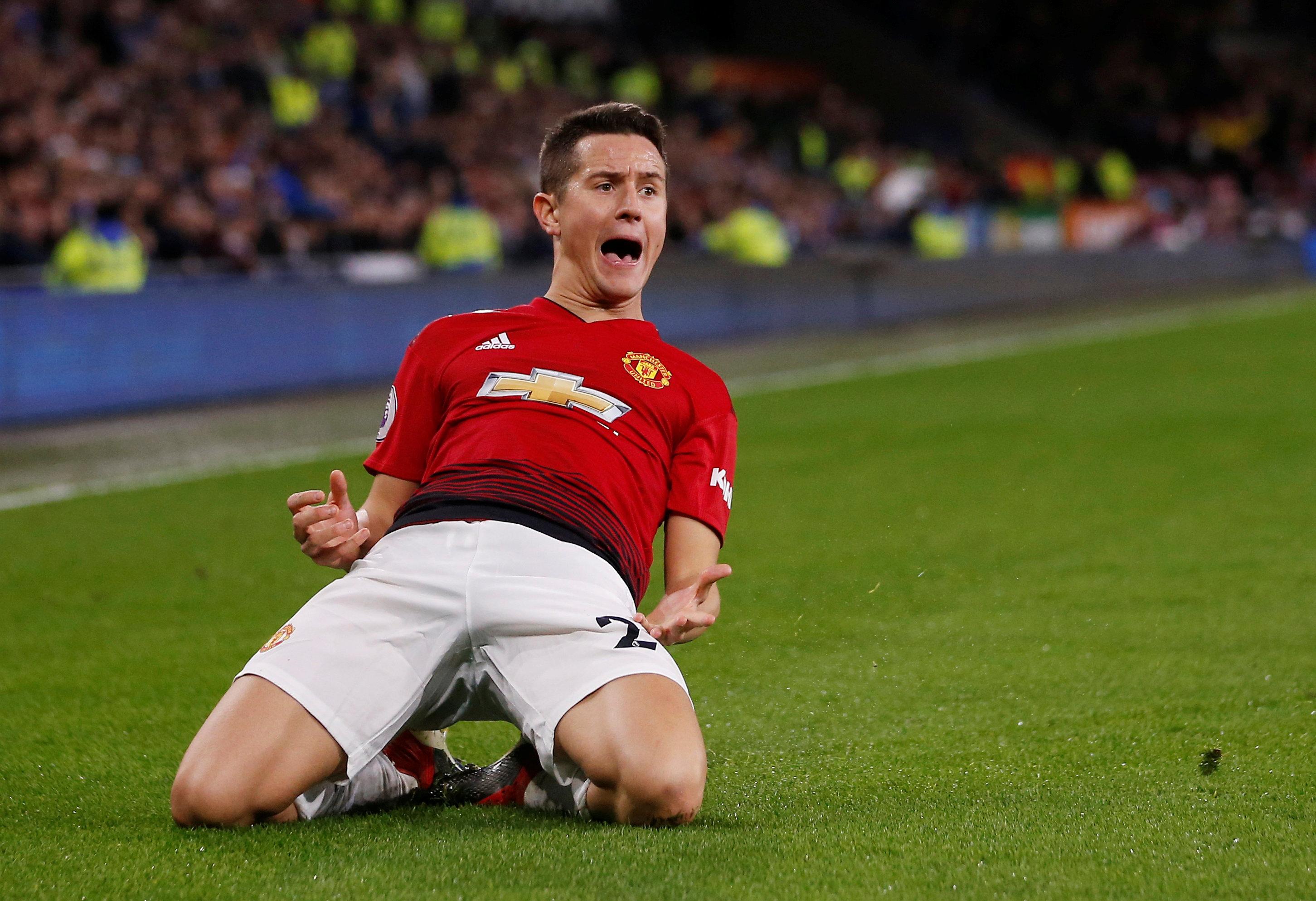 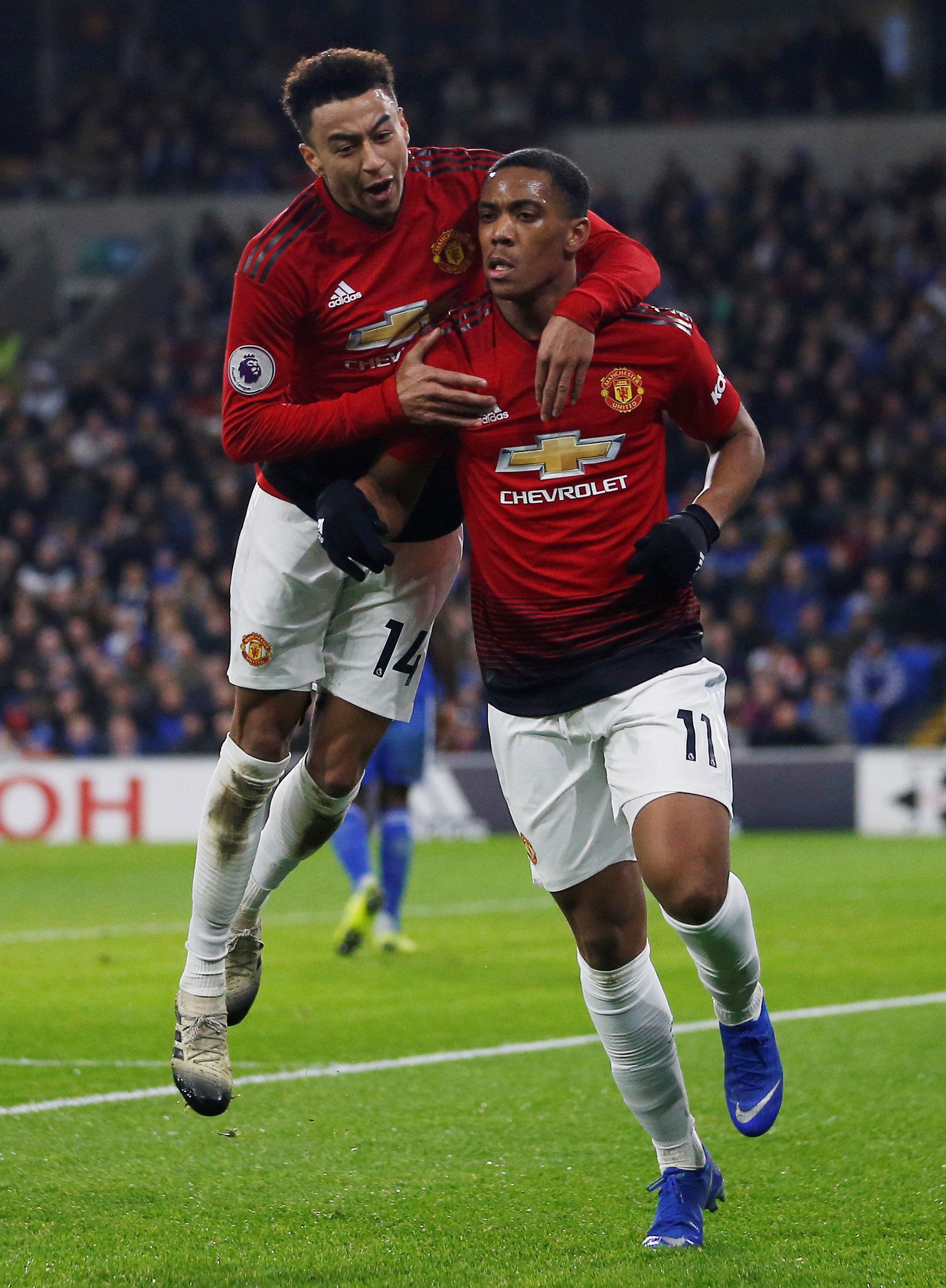 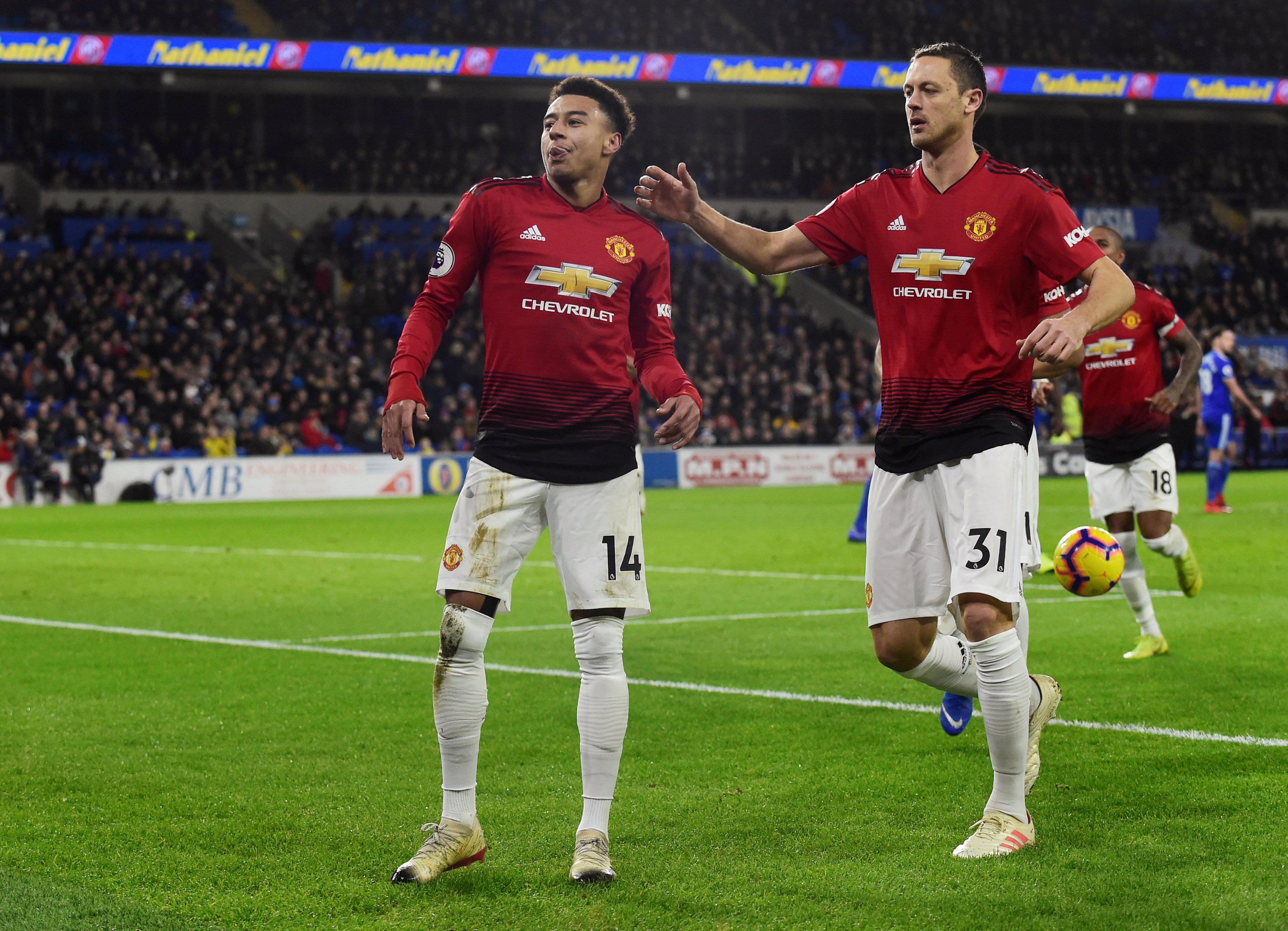 Yet one of Ferguson’s disciples, Ole Gunnar Solskjaer, oversaw an impressive performance which rarely, if ever, seen under Mourinho.

As the goals flew into the net, Solskjaer applauded politely as though he was at the theatre, a far cry from his iconic knee slide in the 1999 Champions League final.

But it was an outstanding start for a manager and this would certainly not have been the final score had Mourinho still been in charge.

The United players played with more zip and creativity and looked to be working much harder.

And Paul Pogba proved he was not worn out after doing all those cartwheels following Mourinho’s sacking as he played a part in four of the goals.

Equally, Cardiff delivered their least impressive performance of the season against their former manager.

But Solskjaer has clearly given the club a lift and while the future remains unclear, United’s players – and their team – are enjoying their football again.

Huddersfield visit Old Trafford on Boxing Day and they should be worried. Another big scoreline looks certain.

Solskjaer, not exactly a major hit in south Wales with five league wins from 25,  was booed by Cardiff’s fans as he left the team bus. 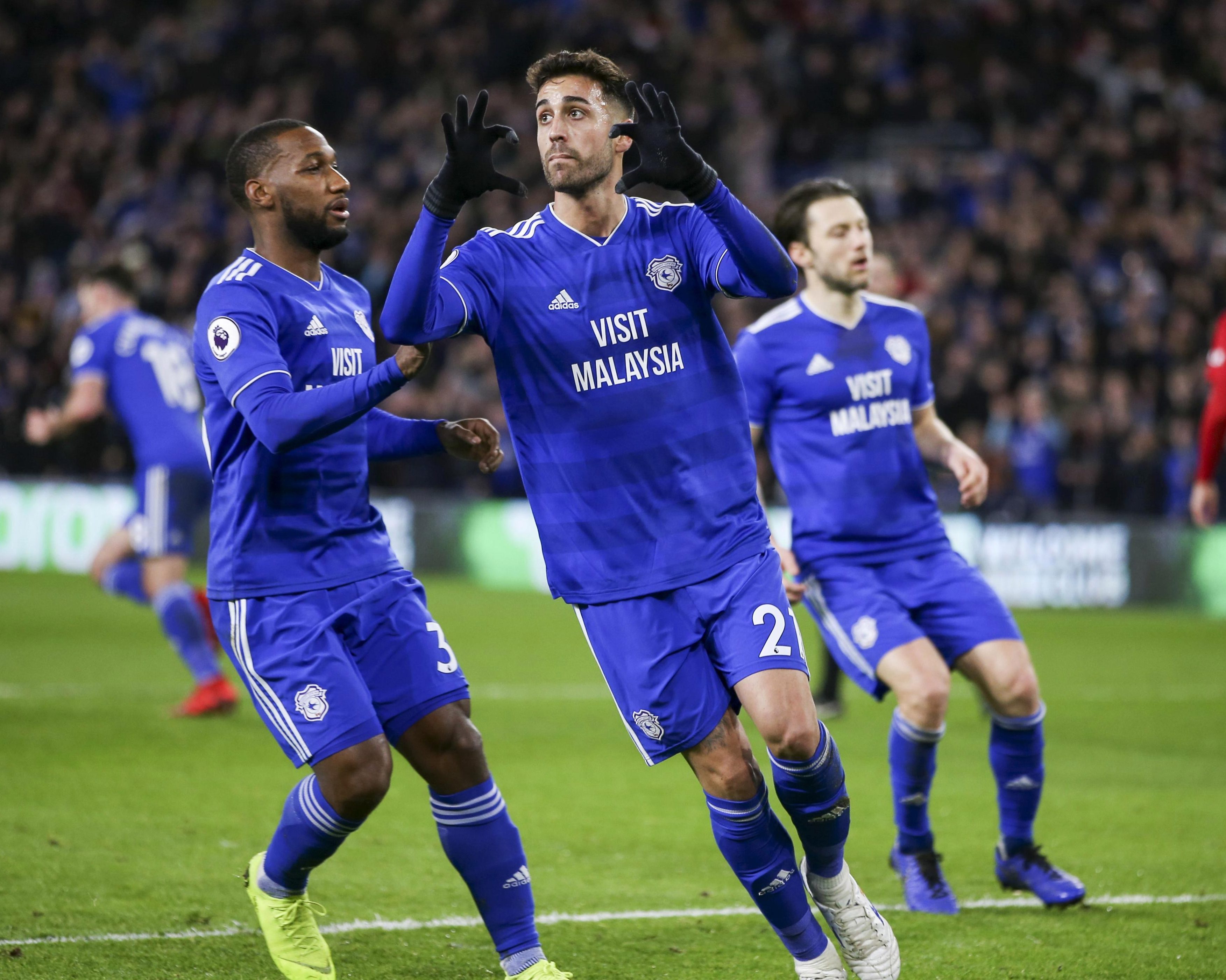 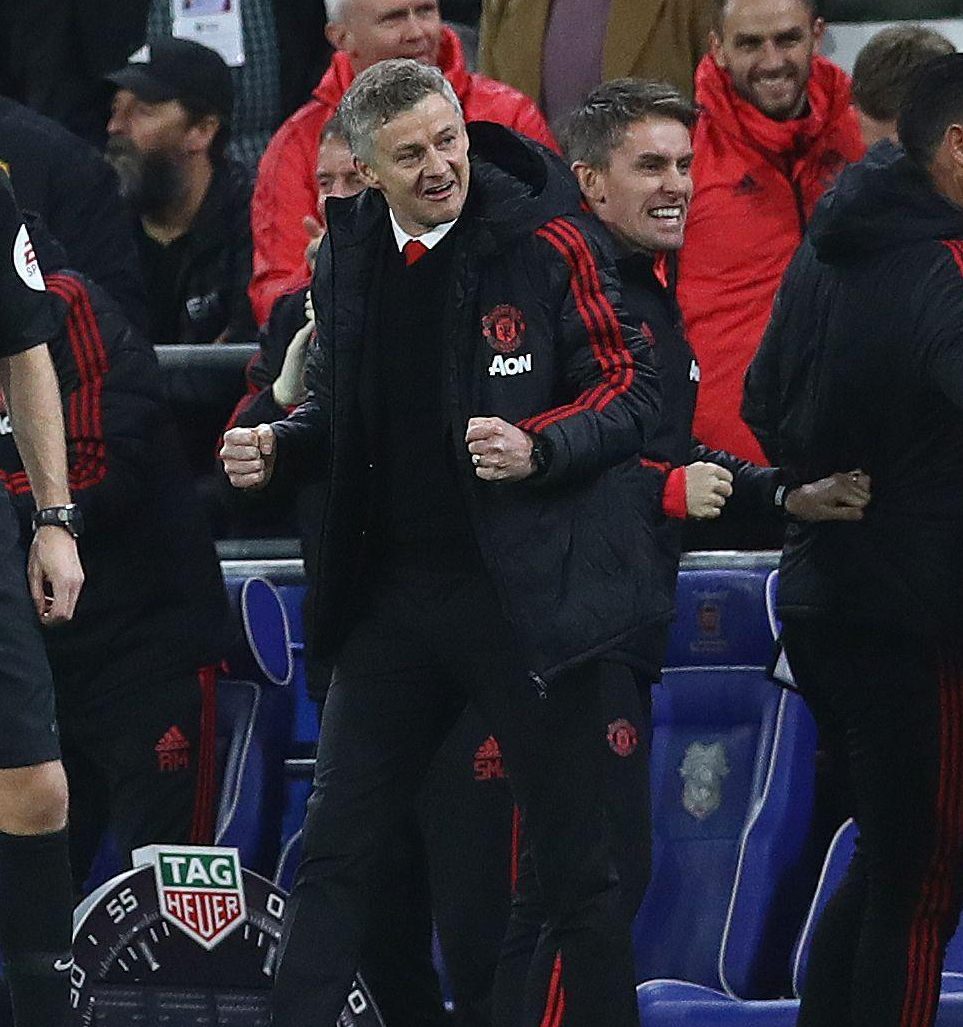 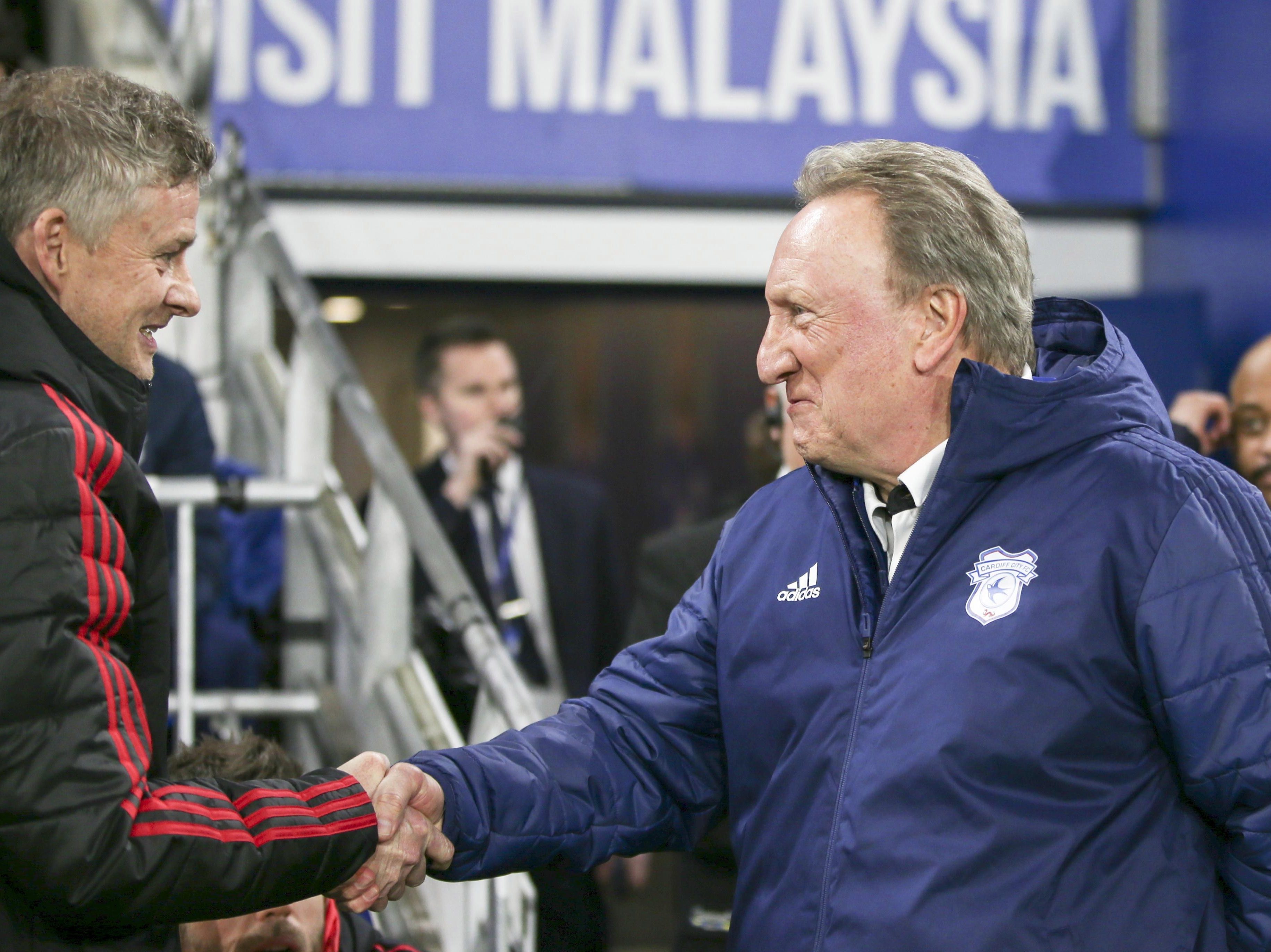 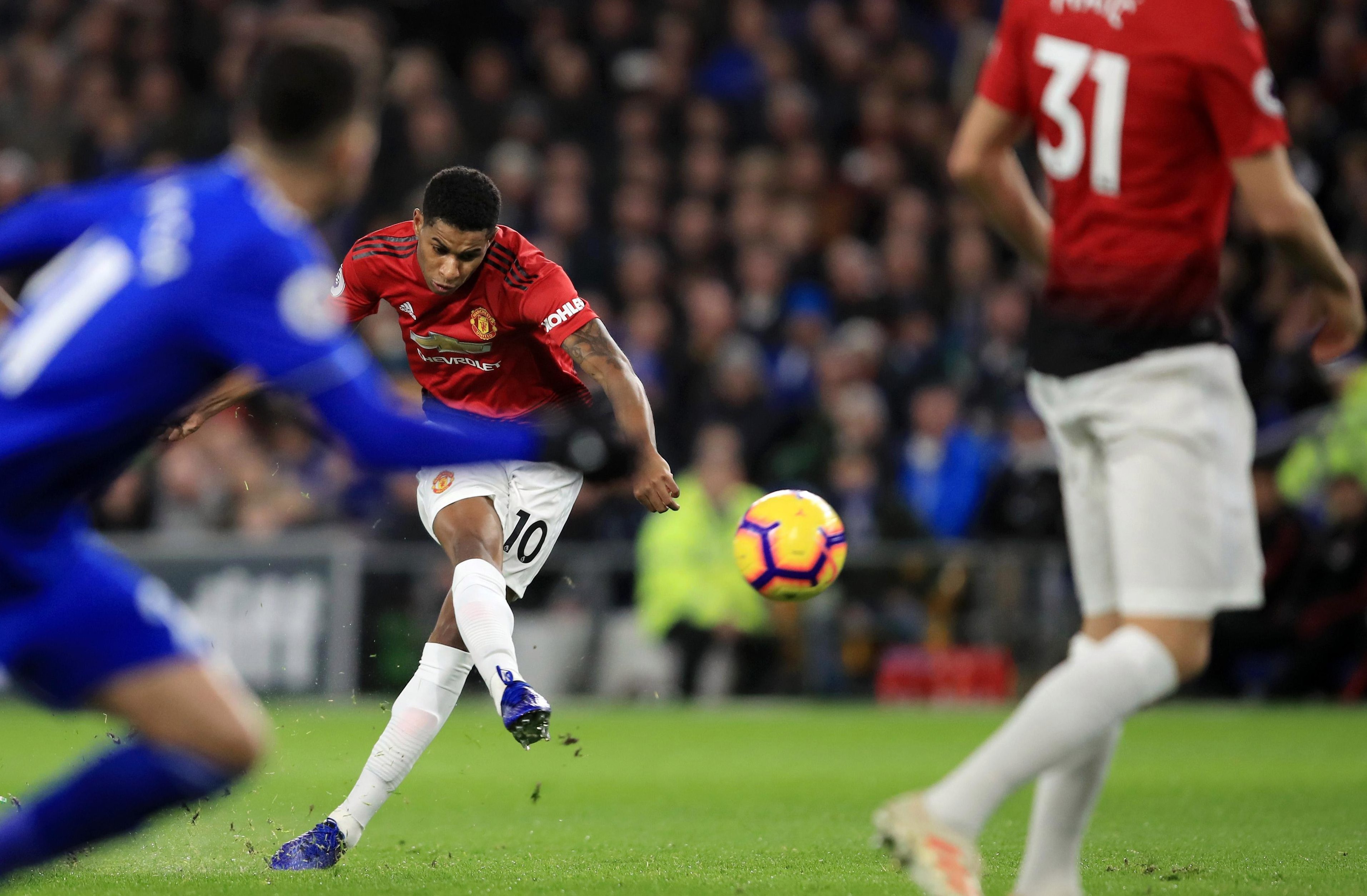 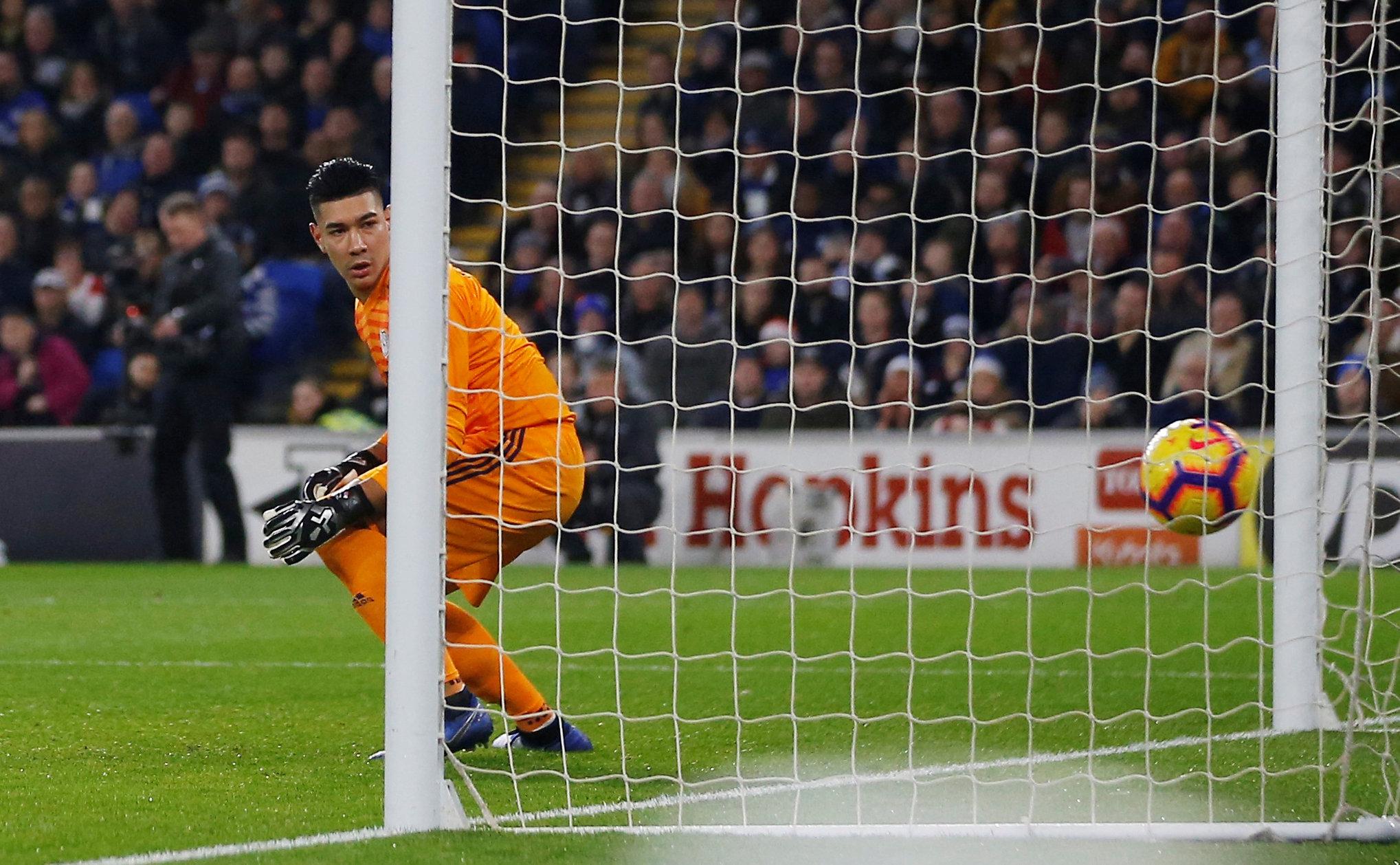 Yet it was in complete contrast, as you would expect, to the reception he received from United’s fans both before and after the game.

With the footballing world watching, Solskjaer would have hoped for a decent start so a goal after 180 seconds was not bad.

United’s fans were singing their new manager’s name with much gusto even before Marcus Rashford’s strike – and it increased a notch as the players celebrated.

The free-kick was awarded after Pogba, back in the team after warming the United bench  under Mourinho, was clipped by Aron Gunnarsson. 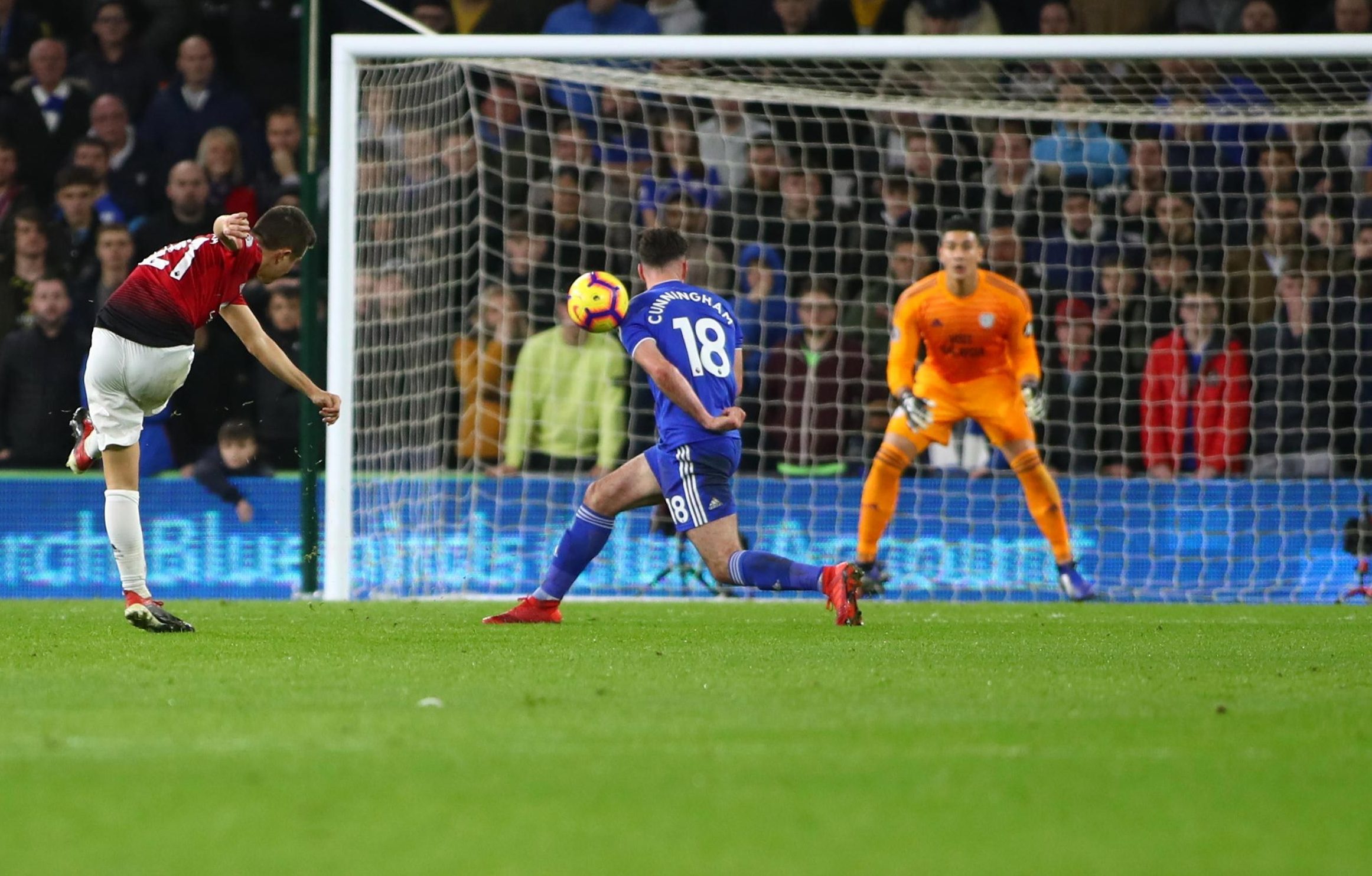 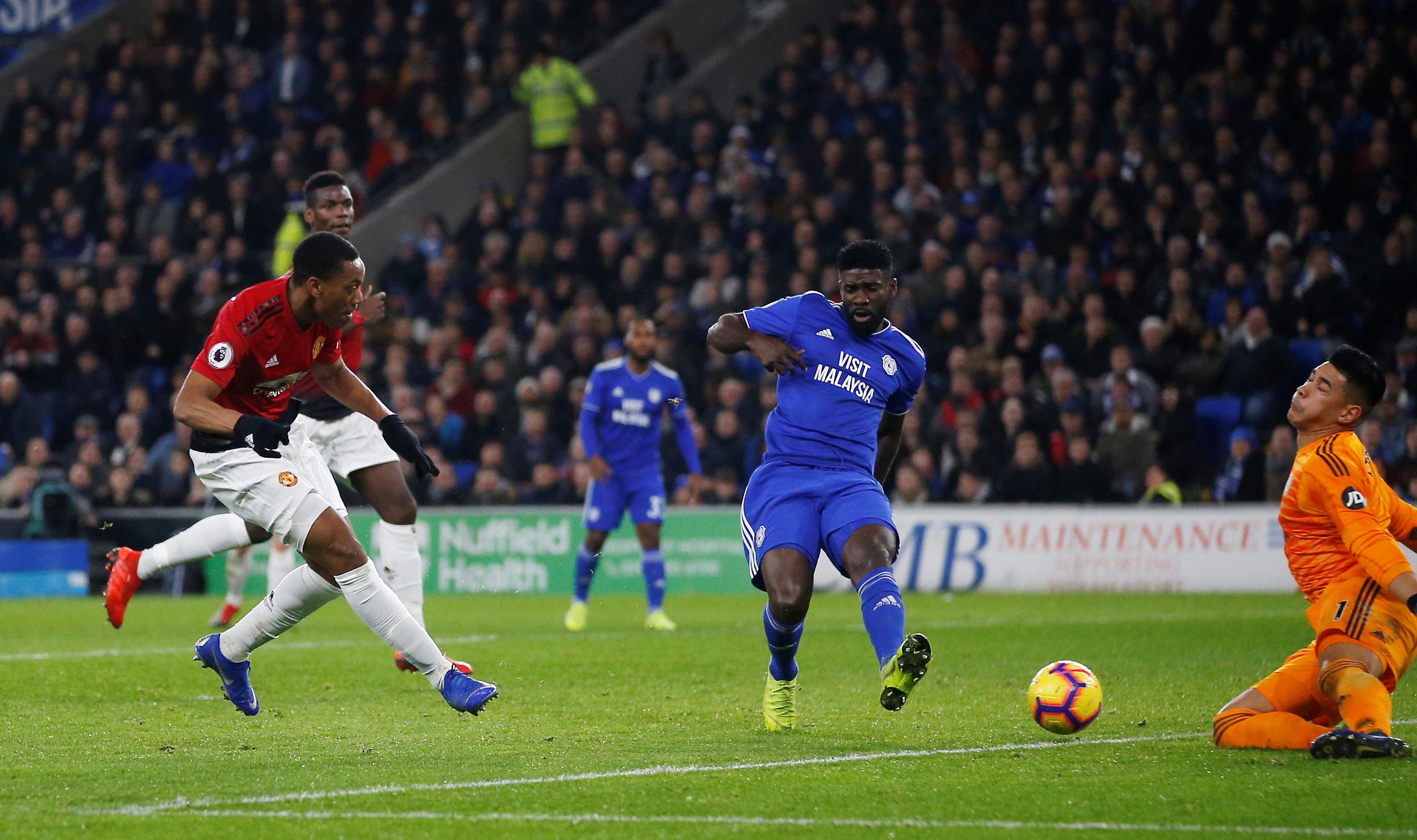 As Rashford prepared to take the free-kick, defender Phil Jones was called over to the touchline for a quick piece of defensive advice but seconds later, the centre-back was walking back to restart the game. Rashford’s long-range effort had found a way through Cardiff’s hopeless wall.

Home keeper Neil Etheridge looked as though some had applied super glue to the soles of his boots, Solskjaer celebrated with another clenched fist and gentle clap while in the directors box, Ed Woodward delivered a broad grin.

Anyone would have thought Woodward had just given Mourinho a one-way ticket to London and appointed a crowd favourite.

Solskjaer, who said at his unveiling he would not be afraid to use the so-called hairdryer, was screaming at his players for failing to use the width of the pitch, with Shaw and Ashley Young being urged to get forward. 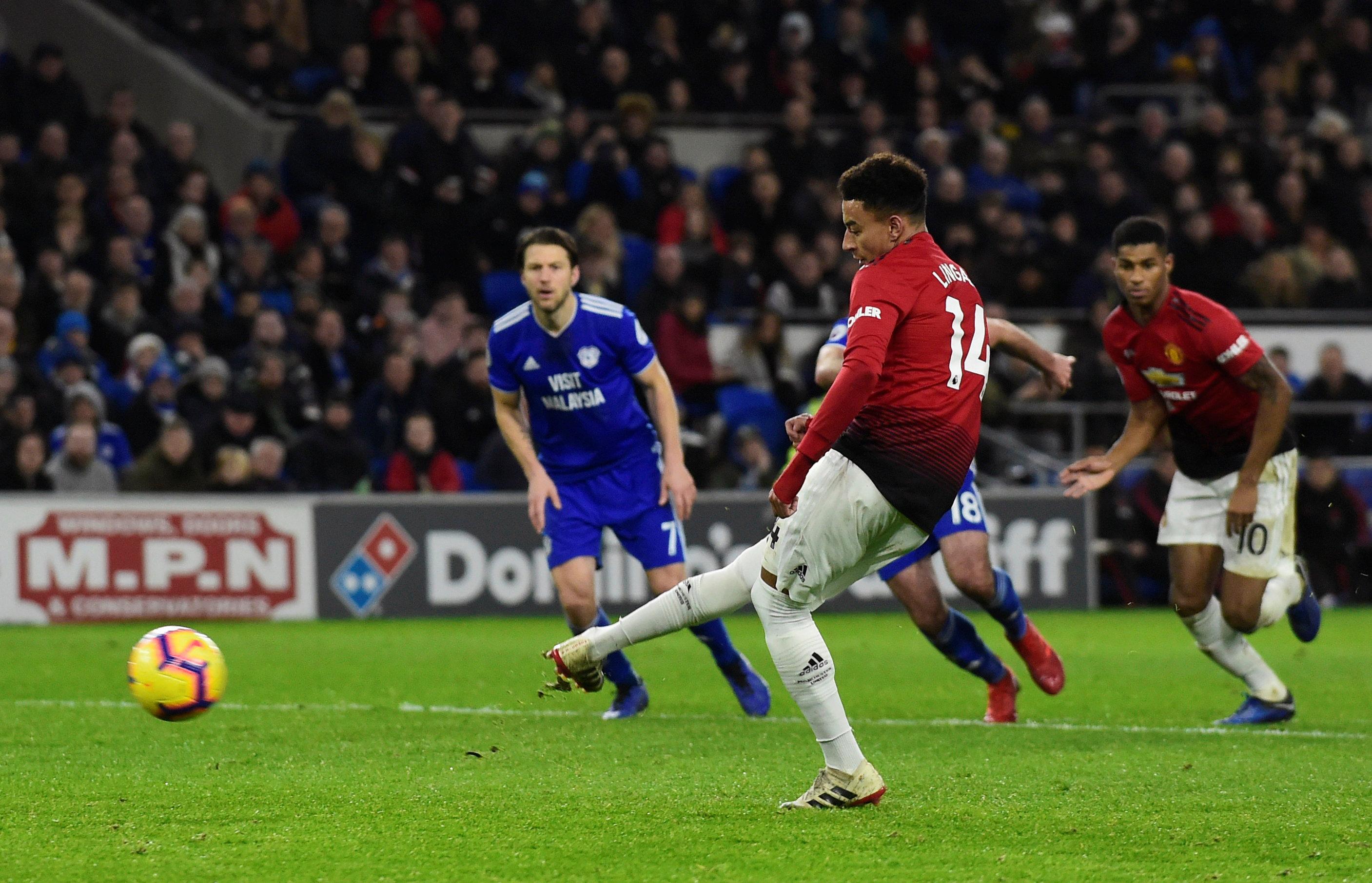 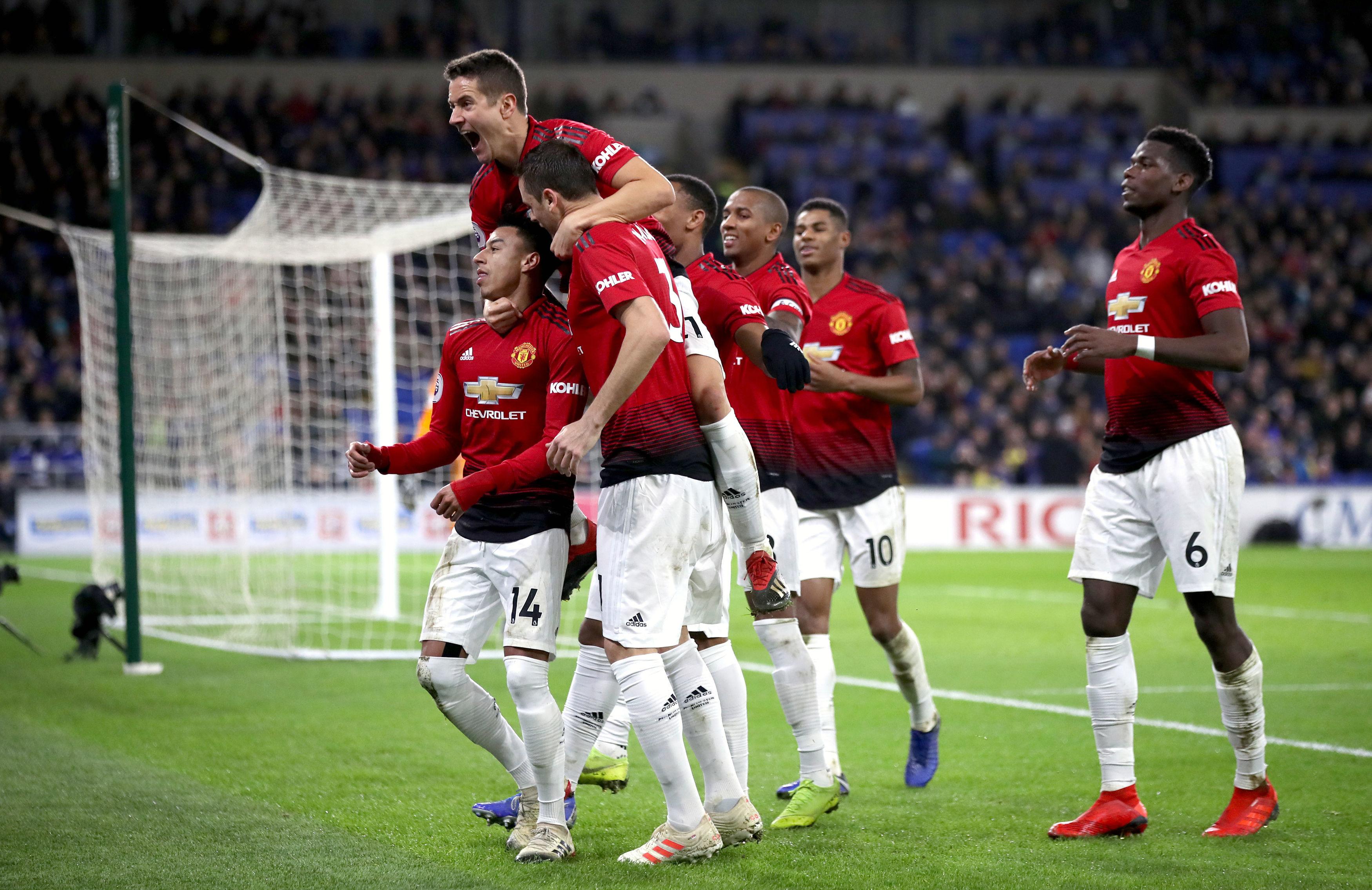 United’s second goal came from the side of the pitch but it was Pogba who moved the ball inside, finding Herrera. His 25-yard potshot took a horrible deflection off Greg Cunningham with Etheridge having no chance.

It was all looking straightforward until Rashford decided to lean his arm into the ball and Michael Oliver gave the penalty with the linesman – who had a perfect view of the incident – immediately waving his flag. Victor Camarasa’s spot-kick was unstoppable.

Solskjaer sat cross-legged without a flicker of emotion although just a couple of minutes later, he was off his seat again.

It was an outstanding move. One of the best this season. Martial started the move and after a terrific exchange involving Pogba and Lingard, the Frenchman always looked certain to tuck the ball away.

Cardiff were annoyed, but they could not have too many complaints, when United were also awarded a penalty after Lingard was caught by Sol Bamba. The England international scored to make it 4-1. 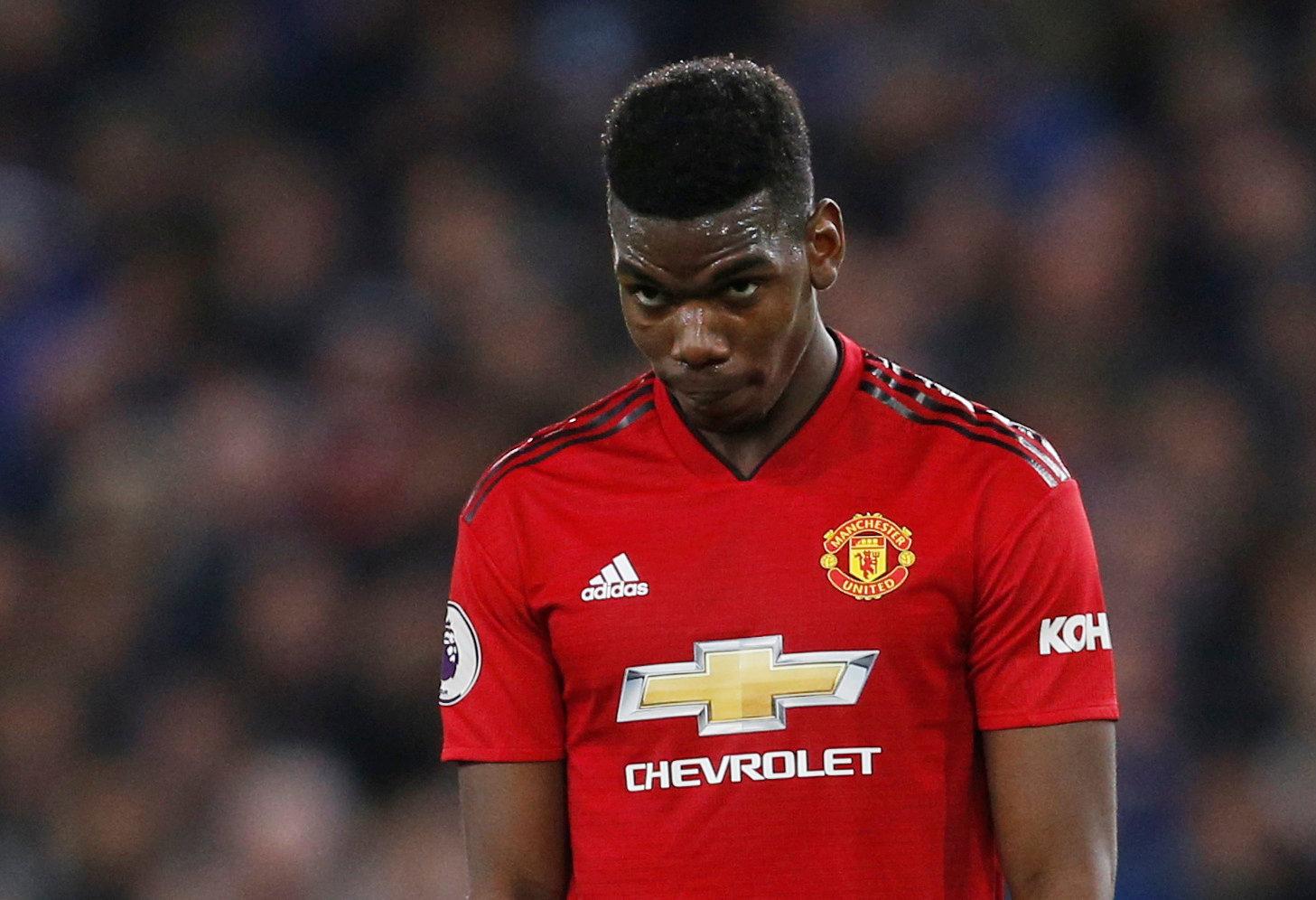 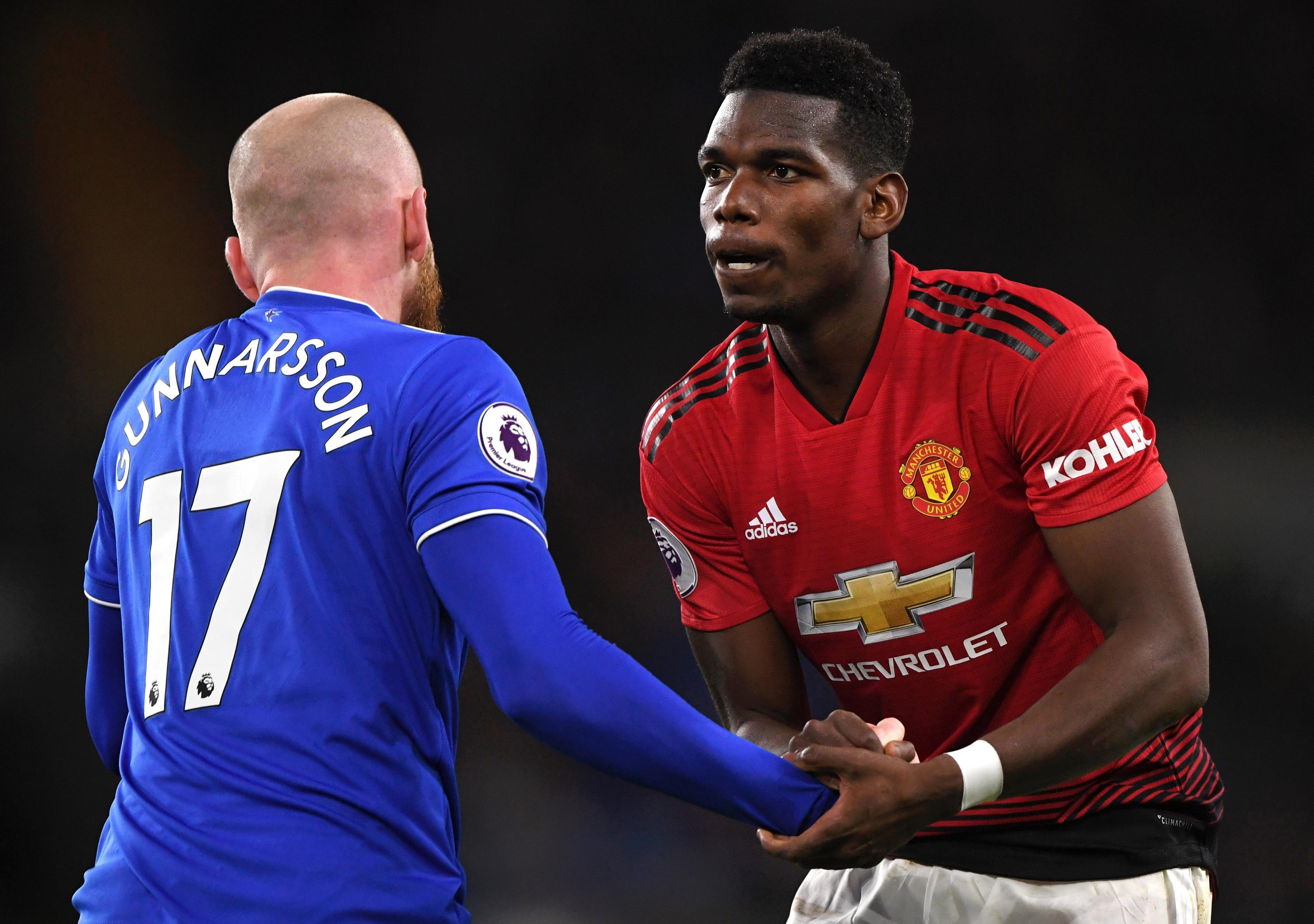 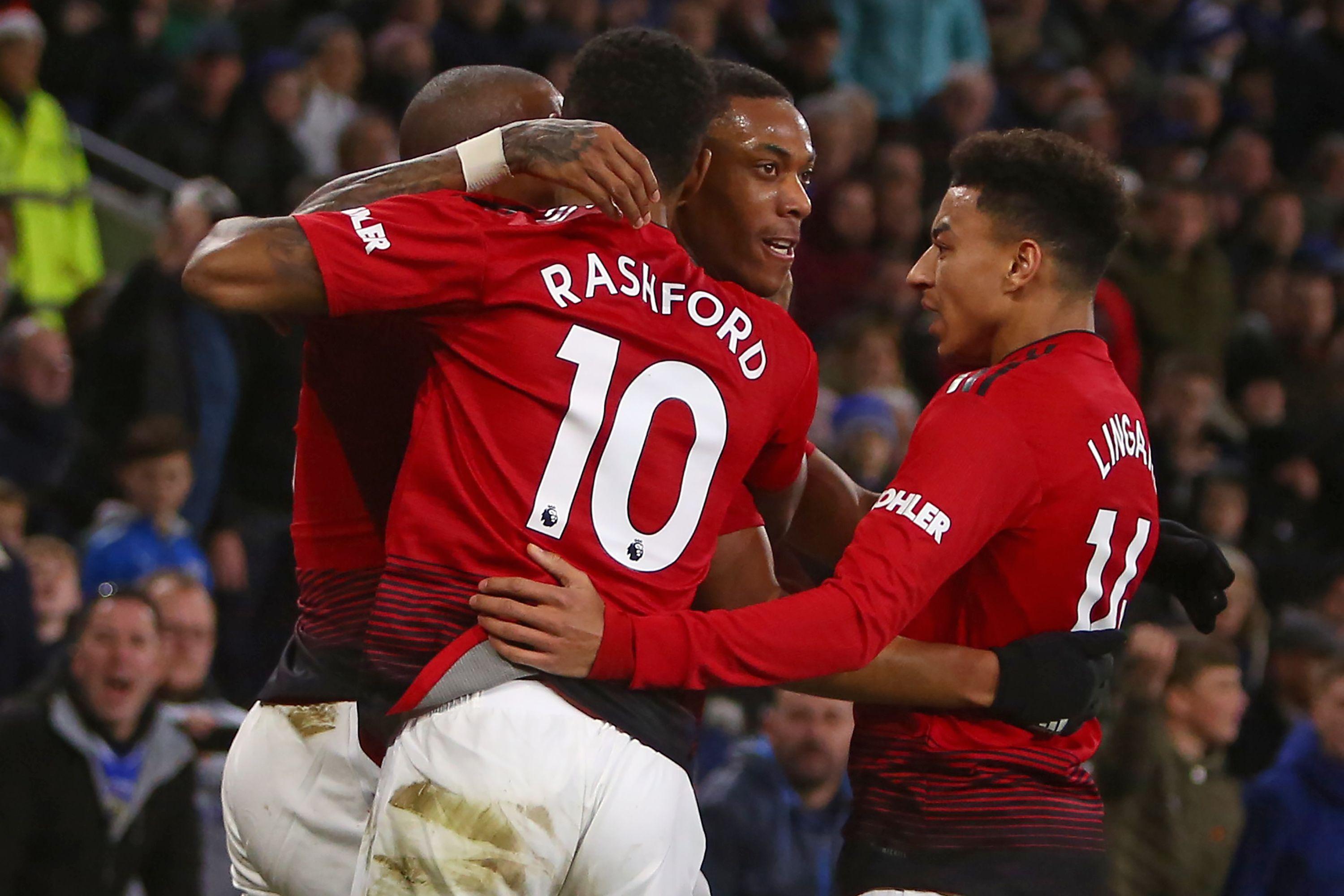 Rashford should have scored a fifth, Etheridge delivered a cracking save to deny Pogba.

Yet Lingard completed the rout in the 90th minute with Lingard taking one tough to push the ball past Etheridge before sliding it into an empty net. Once again, Pogba was involved.

At the end, Solskjaer marched over to the corner to applaud the supporters and Pogba threw his shirt into the stands after helping to throw Mourinho under a bus.

Solskjaer’s final competitive game for the club was an eight-minute appearance in injury-time of the 2007 FA Cup final to Chelsea, which United lost.

Yet his first match as manager was much sweeter. United fans have not had much to shout over the last few years but Manchester City humiliated at home and a big win away from home.

It does not get any better.