Selections based on a good to soft track.

Impossible to tip against 1. Zalatte who looks a very promising filly and has been dominant against some handy opposition in her two wins to date. She looks like she’ll eat up a mile and isn’t badly weighted considering the opposition. The only risk is being outsprinted in a small field but sure she’s good enough to overcome anything they throw at her here.

Dangers: 3. Welsh Legend should have won last start at Canterbury, she was slow out by three lengths and failed narrowly. She’s a filly on the way up with less depth to her form than Zalatte but she’s the logical danger. 2. Snippetspeed appeared to have his chance in the same race as Welsh Legend, sitting handy and just holding down third place. That said he’s done nothing wrong and you’d be surprised if he isn’t competitive. 7. Flying Mojo was no match for Welsh Legend when they met on November 30 and he’s the next best in the five horse field. It would be a decent upset if he were to win.

How to play it: Zalatte WIN. 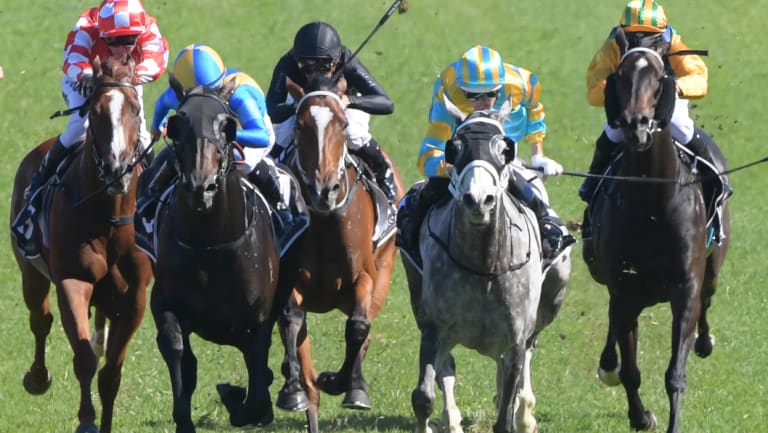 High hopes: My Nordic Hero, second from right with Hugh Bowman in the saddle, returns to Randwick in race 7, the Summer Cup.Credit:AAP

6. Olympic has appeared in two trials and there was enough in his second, a close fourth at Randwick, to say he has some ability and can run a big race on debut. James McDonald riding this one is a good lead and so long as he is firm enough in the betting I expect him to be in the finish.

Dangers : 7. Rocketing To Win wasn’t asked for anything like the effort of the winner in his second in his latest trial a couple of weeks back. Drawn to land on the speed and he can be expected to run very well. 11. Hafaawa had two trials in seven days and she did it very easily winning the second of those at Warwick Farm, kicking away in the straight under little to no pressure. Not sure what was behind her but she’s well worth respecting. 1. Bacchus is a well bred colt and he won the trial that Olympic ran fourth in. He was asked for a bit in that gallop but another drawn nicely and he’s definitely worth including as is the Godolphin filly 12. Pin Sec.

How to play it: Olympic E/W.

6. Knight Star will relish the 2400m at Randwick after he was only warming up at the finish at Warwick Farm last start, running a close fourth at 2200m. Similar sort of race here, he’s down 2kg with the claim and so long as the speed is even he’ll have his chance to finish off over the top of them. Good each-way chance.

Dangers: 1. Equipped appreciated a drop in class to score a very easy win at Hawkesbury over 2000m and that could do him a world of good. He’d struggled to win but was competitive in higher benchmark races prior to that. Gets his chance in town. 3. Tunero is on trial at the distance but he is racing in great form at Canterbury of late. Tried very hard last time behind an all the way winner who controlled the speed. If he runs it out he’ll be somewhere in the mix. 5. Quality Approach is starting to hit his straps over staying trips though his opposition in his two wins has been questionable. Still, he won by almost five lengths at Newcastle and won’t have any trouble with the distance. Include in the chances.

How to play it: Knight Star E/W.

8. Sophiella has been a beaten favourite in all three starts this time in but she’s not far off a win. Only missed by the bob of the head at Gosford last time, off a five week break, and was close up in this grade prior. At peak, drawn to get a nice run again and is entitled to be right in the finish.

Dangers: 11. Nicconita is a very honest mare coming off four straight second placings in Highway races through the winter. If the 1100m isn’t too sharp she’s more than capable of taking this out. Regardless it’d be disappointing if she’s not somewhere in the first four home. 10. Transmitter is an up and coming filly with a couple of nice wins from as many starts this prep. Dominant on a soft track first-up then took a while to reel them in at Gosford so she’s probably wanting the extra 100m. Can’t leave out. 4. Miss Celebration is the big query runner first-up without an official trial. She won her first three starts pretty well then failed in a fairly strong BM70 at Rosehill in August. Speedy and could take some running down.

6. Laburnum has placings behind Thinkin’ Big and Smart Melody to her name and she was a nice winner of a trial over Prophet’s Thumb (scratched here today) a couple of weeks back. She has the tricky alley to contend with otherwise she'd probably be shorter in betting. If luck goes her way she can still win.

Dangers: 1. Above And Beyond looked good winning his first two starts this time in from the front then sat outside the lead and was no match for a smart one at Warwick Farm. Might be bumping into one or two handy ones again here but he’ll be on the speed and should run well. 2. Whiteley is a query runner first-up as a gelding after he failed in two starts in September. His previous prep featured a close second to Royal Celebration and a placing to that horse and The Autumn Sun so he’s definitely good enough. Keep safe. 3. Black Magnum chased a handy one first-up then proved too strong as a short-priced favourite at Hawkesbury after leading. Back against his own age here and can measure up.

How to play it: Laburnum E/W.

Can’t see any reason why 1. Sir Barb won’t be somewhere in the finish at generous odds. He’s not really a wet tracker yet he attacked the line with style at Canterbury third-up. A drying track is right in his favour, he loves the mile and he drops in class. Sure he was $51 last time but he’s ready now and should run well.

Dangers: 2. Tahsin can be a bit in and out but he found his best to win the Mudgee Cup last start for his fifth success over a mile. Seems well placed with the claim and a favourable draw and he’ll either be right in the finish or be safely held, there’s no in between with him. 3. Nicochet didn’t do a whole lot in the same race as Sir Barb at Canterbury when in the market. Go back three starts and he ran Sky Boy to a neck or so at Rosehill. If he can find that form again he’ll be very competitive. 6. Wokurna is the likely leader and he’s the one on the way up with a couple of provincial wins from his three starts to date. The wins have been narrow but he’s shown fight. Could measure up. 10. Cyber Intervention had no luck at Wyong second-up and should have finished a lot closer. He could surprise out on the big track.

2. Aloisia is a Group 1 class mare at her best and she showed she’s not far off that with her slashing second in the Villiers Stakes, coming from last at the turn to be beaten a neck. She’s proven at 2000m, isn’t badly weighted and has drawn a little better. Simply, if she can repeat that Villiers effort it’ll take a good performance to beat her.

Dangers: 3. My Nordic Hero has won twice at the 2000m and he finished a game third in the Villiers. Meets Aloisia 1kg better for the length defeat but at the same time the mare went past him like he was tied to the fence. But he’s racing consistently and she has to prove she puts two together so he has to be a threat. 12. Fierce Impact missed the Villiers meeting and won a trial a couple of days later. He’s some of the fresh blood in the race and he did finish a game second to Sky Boy at Rosehill a month ago so his form ties in. Yet to really put it together but every chance here on the limit. 11. Roman Son is another up and comer and he looked a run short when finishing off into third over a mile with 58kg on Villiers day. He has all the upside and no surprise to see him somewhere in the finish.

6. Grand Finalist is first-up since May and his form shows he’s generally not too far away in his races. Fitter for two sharp trials and being an on-pacer he’ll be in this for a long way. He was beaten half a length over 1200m when resuming last time in. Like to see some support for him and if it comes then expect him to go close.

Dangers: 5. You Make Me Smile trialled against open class horses at Canterbury recently and had a decent hitout. He’s a gelding this prep and while his form has been a bit mixed he is a winner over this course and distance and from barrier one will be in this a long way. 7. Juventus charged through the grades earlier this year and resumes with James McDonald on board from an inside gate. He likes the sting out of the ground and is fitter for two trials where he wasn’t asked to be in the finish. Keep safe. 9. Legerity was well supported first-up at Canterbury but failed badly beating just the one home. He was found to be 3/5 lame so that’s a pretty decent excuse. Entitled to another chance especially if the money is there for him again.

How to play it: Grand Finalist E/W.