Rail in the true position and a soft track rating should provide a slight on pace bias.

This looks the race for the Kris Lees-trained gelding 3. Exdream to record his first career win after two consistent runs at Port Macquarie over 1000m behind Red Cupcake and Casino Mondial, who have run very well since. Dropped back to the unsuitable 900m last start sand sat three deep on the pace and fought on well. The step out to 1200m looks ideal and from barrier 6 will jump straight to the front and be able to control the race.
Dangers: 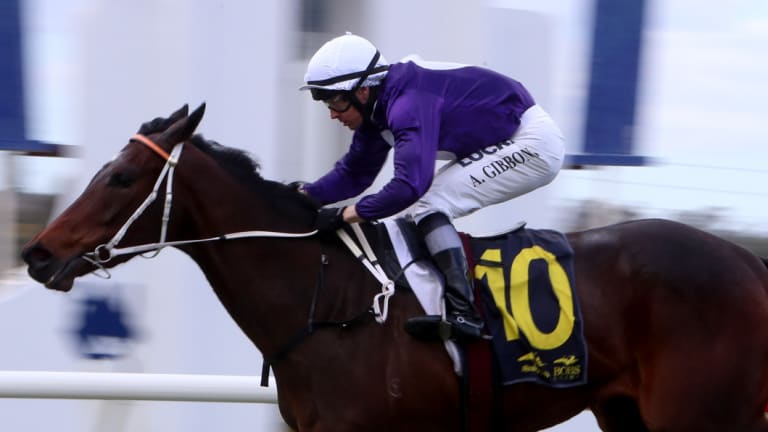 In form: Andrew Gibbons has another good book of rides at Coffs Harbour.Credit: Sylvia Liber

The locally trained 2. Via Condotti looks the only danger to the favourite. Showed improvement last start at Tuncurry over 1400m where the filly overraced and was run down late. Suited back to 1200m and will be able to sit closer to the speed in a race that lacks early pace.
How to play it:  Exdream to WIN and 3 and 2 Quinella.

Competitive maiden for the entires and geldings. Grafton trained 9. Miracle Knight showed blistering gate speed to lead over 1000m first up last start and condition told late, getting run down over the final 100m. Back to 800m here suits and should be right on the speed and will be hard to run down.
Dangers: First starter 5.Paolo looks ready to go first up off solid trials. Wasn’t asked to do much over 800m in his latest. Locally trained 1. Bolghari has his first NSW start for trainer Jim Jarvis. Hasn’t had an official trial into this but if he can reproduce his Victorian form will be in the finish.
How to play it: Miracle Knight to WIN

Big field of fillies and mares to tackle the 800m here. Daughter of So You Think 8. Delayed Response was a very impressive trial winner over 800m for local trainer Paul Smith. She jumped well in the trial to sit outside the speed and cruised to the line under a hold in one of the quickest trials of the day.
Dangers: 3. Jillerette was a solid second behind Delayed Response taking up the lead and quietly ridden to the line. With improvement from that trial will be in the finish here. Of the raced brigade 6. Black Vixen stands out after a competitive run over 1000m last start at Gunnedah getting run down late. From barrier 4 gets a beautiful run behind the speed.
How to play it: Delayed Response to WIN

With the lack of pace early, have settled on the locally trained 1. Plectrum, who finds the lead without any pressure. Has recorded two wins over the 1000m and has won at the track.
Dangers: 3. San Marco settled at the rear of the field last start at the track over 1000m before finishing powerfully to finish within a length of the winner. In a small field will be able to settle closer and will be the one coming at them late. The lightly raced 2. Impulsive Maneuver ran well first up behind San Marco and will improve sharply here.
How to play it: Plectrum to WIN

Very open race with many runners having the required form to be in the finish. The lightly raced 9. Casurina Star has improved each start as the distances have risen and will relish the 1600m. Good effort on debut over the unsuitable 1000m before stepping up to 1400m at this track sitting midfield and finishing powerfully over the top of them.
Dangers: 1. Achi Baba has been consistent this preparation, gets a nice run behind the speed from a nice barrier and will run a strong 1600m. 5. Cool Prince had no luck last start getting held up at a vital stage and always runs a competitive race.
How to play it: Casurina Star to WIN

Lightly raced Gold Coast trained 6. Windermere has improved at every run this preparation. Bolted in last start stepping up over 1600m at Ballina and if the filly can reproduce that effort will be hard to beat again. Goes to the 2000m for the first time, which looks ideal.
Dangers: Andrew Gibbons retains the ride on last-start winner 3.Diamond Deluxe and looks to get the lead  without doing much work from a nice barrier. 1. Chantilly Chateau gets out to a suitable distance for the first  time this preparation and will be right up on the pace when they jump.
How to play it: Windermere to WIN

Toby Edmonds trained 3. Phoenix Global was dominant in breaking its maiden at Ipswich last start leading all the way in quick time. Has the early pace to cross them and control the speed and be very hard to run down.
Dangers: Kris Lees-trained 2. Heredero looks the only danger to the favourite. Returned this preparation with a good effort at Tuncurry charging home late to just miss over 1000m. Step up to 1200m here looks ideal and will stalk the speed.
How to play it: Quinella 3 and 2

Very even field over 1300m to finish the day. Have settled on 8. They Call Me Rose at each way odds. Won over 1400m two starts back leading all the way then stepped up to an unsuitable 1800m where she didn’t see out the trip. Back to 1300m and will get an easy lead in a race that lacks early pace.
Dangers: 4. Tarbert was very good at the track over 1200m last start sitting back in the field and finishing over the top of them late. Looks to peak here third up in distance.
How to play it: They Call Me Rose EACH WAY