In an era where players can earn millions crashing and bashing, it was the Indian batsman without an IPL contract who placed the highest price on his wicket.

On a scorching hot day in Adelaide, Cheteshwar Pujara preferred the furnace out in the middle to the air-conditioned comfort of the dressing room, denying Australia with a defiant 123. Only a spectacular run out from a Pat Cummins direct hit brought an end to his innings, and the day's play. 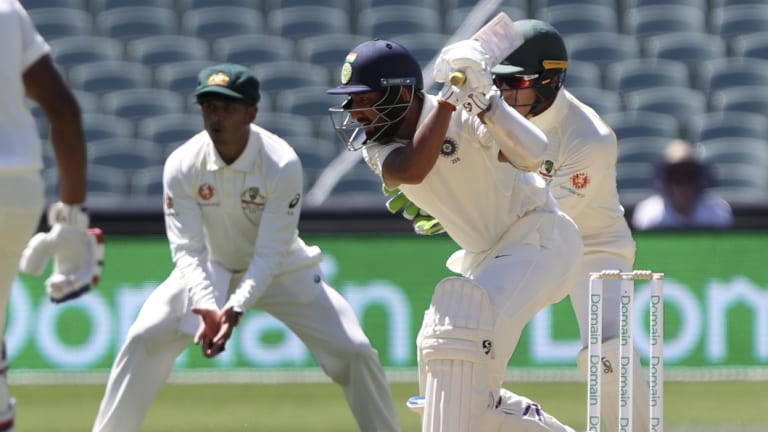 Patience of a monk: Cheteshwar Pujara fights a lone hand for India on day one of the first Test.Credit:AP

As teammate after teammate gifted their wickets to Australia playing millionaire shots, Pujara stood firm for his country and registered the first century of the series. Only late in the day, with two wickets remaining, did he open his shoulders. If there was such a phrase as playing "tough Indian cricket", the stubborn No.3 showed how.

Pujara was dropped for the first Test in England after a poor run in South Africa but regained his place after one game. Without him here, India's hole would be so deep you might as well be filling it with dirt rather than throwing a rope to pull them out.

There has been a push in modern cricket to move the game along or to turn the match in a session. Pujara, however, proved resistant to such fads. He is clearly of the belief that batsmen turn games in an instant by getting out.

For just over six hours on day one, Pujara, whom former India opener Aakash Chopra noted eats patience for breakfast, lunch and dinner, resisted temptations like a monk.

Balls that his compatriots were driving extravagantly at, and consequently getting caught behind the wicket, Pujara was prepared to let go.

He waited for balls to come to his preferred areas before engaging. His favourite zone was his pads, where he would be able to snap his wrists to send the ball through mid-wicket.

He drove only when the ball was full and cut when truly short. There was little interest in anything in between.

"He's saying to the Australian bowlers, you're going to be bowling to me I'm not going to go searching for runs," Australian fast bowling great Jason Gillespie said on Channel Seven. 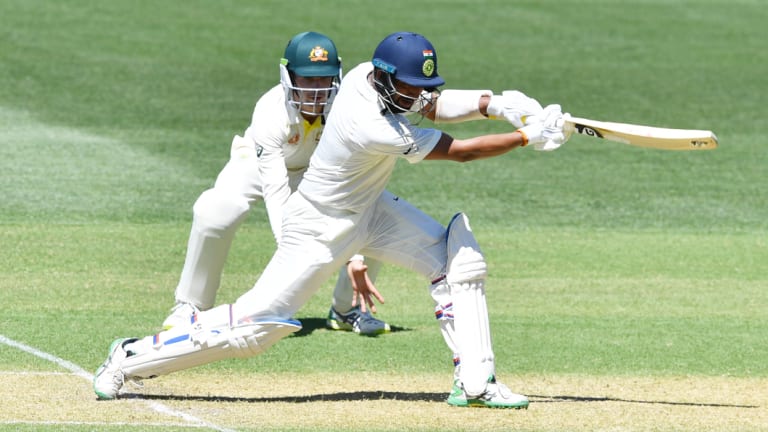 Stalwart: Pujara drives during a knock antithetical to the modern crash and bash game.Credit:AAP

Peter Handscomb missed a difficult opportunity when Pujara was on 25, though the ball came at him so fast at short leg it would be rough to term it a chance. Same with the one that went through Aaron Finch at leg slip when Pujara was on 78.

Pujara took 153 balls to reach 50, not the type of strike rate that would have IPL franchises lining up to throw rupees at him but his value to India's cause was priceless as they sought to repair the significant early damage.

"I imagine there will be a few of his teammates in the dressing room wishing [they] had played like that today," former Australia captain Ricky Ponting said. "[Saying] 'I wish I had given myself 30 or 40 balls to get settled.'"

The Australians are no stranger to Pujara's considerable powers of concentration. Last year, he blunted Australia's barnstorming start in India with a fighting 92 in Bangalore, which set up a stirring come-from-behind victory to level the series.

In the following match in Ranchi, he built a fortress around his wicket that Steve Smith's bowlers took the best part of two days to breach, at the cost of a double ton.

"I am confident but at the same time I would also like to respect the opposition," Pujara said earlier this week. His teammates could do well to take a leaf out of his book.