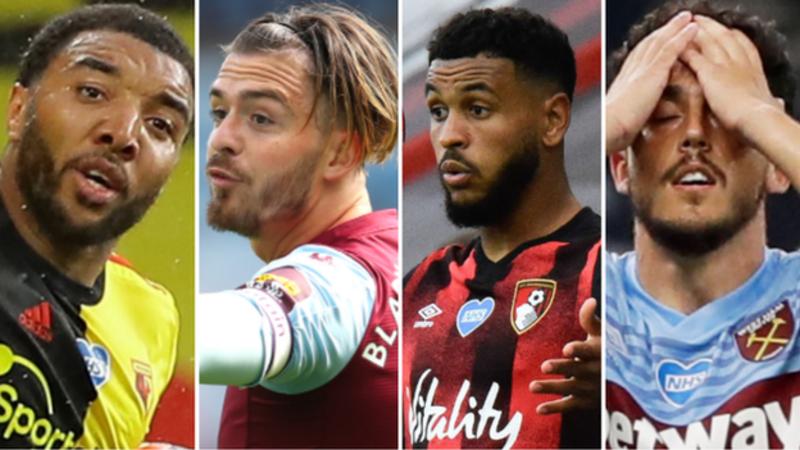 Six teams scrambling to avoid finishing in the bottom three with five games the go – the race to stay in the Premier League is reaching a tense finale.

While Norwich look doomed after being cut adrift at the bottom, 15th-placed Brighton – nine points above the relegation zone – appear safe.

But with 15 points still to play for – including some key games between teams fighting for survival – Bournemouth, Aston Villa, Watford and West Ham will all believe they can turn their season around.

Who will stay up? Which teams are heading for the Championship? And is the fight for survival heading for a gripping last-day battle?

Here, BBC Sport assesses the teams in trouble at the bottom of the table.

Having seen his side go backwards since the Premier League resumed, Norwich boss Daniel Farke says it is “unrealistic” to talk about avoiding relegation.

Norwich, promoted last season after finishing top of the Championship, were six points from safety when top-flight football resumed after being suspended due to the coronavirus pandemic. That gap is now seven points.

In contrast, Brighton resumed the season just two points above the drop zone. Four games later and Graham Potter’s men are now nine clear of 18th-placed Aston Villa on 36 points – a tally that has been good enough to stay up for the past three seasons. 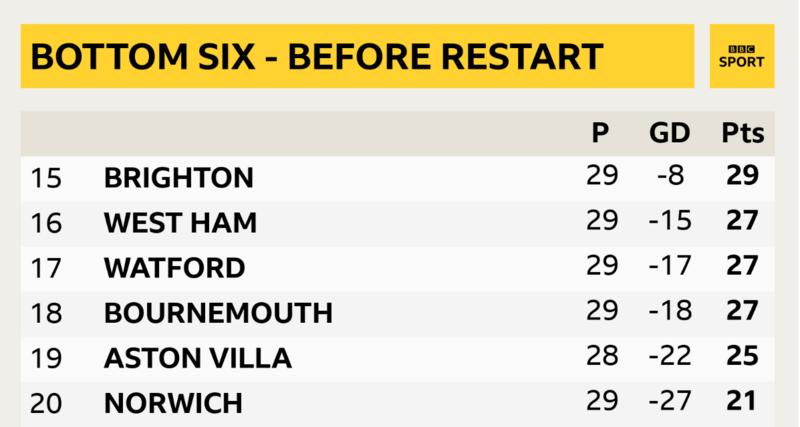 Like Norwich, Bournemouth have also failed to muster a point in their four games back. Indeed, the bottom six have managed a combined total of 14 points – with Brighton winning half that tally – from a possible 75, and three wins in 25 since the Premier League resumed. 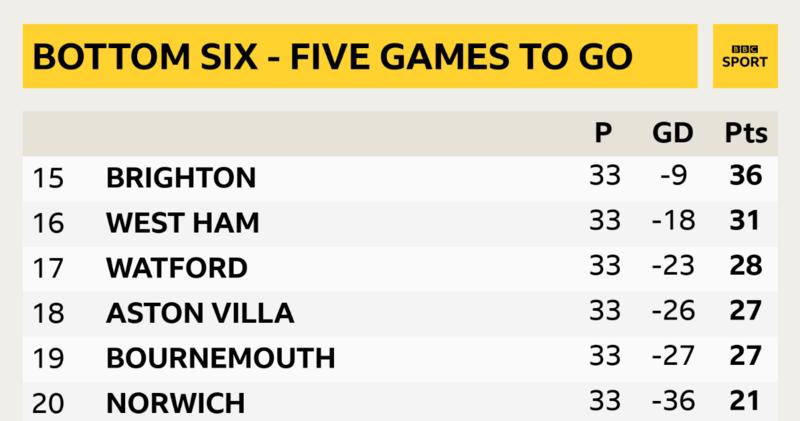 “Villa and Bournemouth’s run-ins are much harder than West Ham and Watford’s. Watford manager Nigel Pearson has been in this position before with Leicester and got them out of it, so he knows what it takes and what his squad have to do.”

West Bromwich Albion’s 34 points in 2004-05 make them the team with the lowest total to remain in England’s top flight in the Premier League era.

Watford, in 17th, are still six points off that total with five games left.

Villa and Bournemouth have been in the bottom three since the end of February but history suggests they can still get out of trouble.

With five games of the 2007-08 Premier League season left, Fulham had just 24 points and were six points from safety.

Roy Hodgson’s side stayed up after beating Reading, Manchester City, Birmingham and Portsmouth in four of their last five matches to finish in 17th, level on points with 18th-placed Reading but with a superior goal difference.

Who will be relegated?

Why Brighton can plan for a fourth Premier League season: Brighton have found form since the restart, taking more points than third-placed Leicester and as many as champions Liverpool, who they host on Wednesday. Only a catastrophic set of results will see the Seagulls go down.

Former Arsenal and England forward Ian Wright, speaking on Match of the Day: “Graham Potter has got to get a lot of credit. Brighton’s defensive shape is very good but they also have a cutting edge going forward.”

Coming good at the right time? West Ham posted financial losses of £27.26m earlier in the season and said staying in the Premier League was “an absolute necessity”. A thrilling win over Chelsea and a hard-earned point at Newcastle in their last two games have helped ease the threat of relegation, with three of their last five games against fellow strugglers Norwich (away), Watford (home) and, on the final day, Aston Villa (home).

Former Chelsea and Scotland winger Pat Nevin, speaking to BBC Radio 5 Live: “I was so impressed with West Ham’s work rate against Chelsea – it was phenomenal. I spoke to a member of staff at West Ham after the game and he said they played brilliantly and worked hard, but trying to get them to play at that level and work ethic for the rest of the season is going to be really difficult.”

Key stat: West Ham are on a run of 13 Premier League matches without a clean sheet – only Bournemouth (16) are on a longer current run without a shutout. They last had a worse run back in December 2009 (15 games).

Watford: Will Hornets get over the finishing line?

Position: 17th – one point above the relegation zone. Promoted to Premier League: 2015. Form since restart: 1/12pts.

Tense finale for Hornets: Watford were bottom, six points from safety, when Nigel Pearson took charge in December. After an initial burst of wins, they enter the last five games out of form and in desperate need of wins before their last two games of the season against Manchester City and Arsenal.

Former Arsenal and England defender Martin Keown, speaking on Match of the Day: “There has been a special bond between Nigel Pearson and his players. He needs to pull them together to change their season.”

Key stat: Watford have lost their last three Premier League games by an aggregate score of 1-7. They last lost four in a row within the same season back in December 2017.

Aston Villa: Is it all over for Villa?

Will Villa stay in the fight until final day? Villa spent big after winning promotion via the play-offs. Despite reaching the Carabao Cup final, they have struggled to adapt and are in grave danger of making an immediate return to the Championship. Boss Dean Smith has to make sure his side are in with a chance of staying up by the time they visit West Ham on the final day.

Former Aston Villa and England forward Emile Heskey, speaking to BBC Radio 5 Live: “It’s very difficult for Villa to turn it around, even in that relegation battle where it seems no-one wants to pull away. Villa have Manchester United next. It’s a difficult one and they are stuck in a rut.”

Cherries not got going since restart: It feels a long time ago since Joshua King and Dan Gosling were hitting winners earlier in the season for Eddie Howe’s side against Manchester United and Chelsea respectively. Bournemouth have been left standing on the starting line since the Premier League restarted, and two of their last five games are against teams in the top three.

Former Liverpool defender Stephen Warnock, speaking to BBC Radio 5 Live: “It seems as though everything is very down at Bournemouth. I listen to Eddie Howe and it is like they are resigned to going down. The games are very difficult but we have seen Bournemouth pick up a result where you don’t expect it.”

Key stat: Bournemouth have lost 20 Premier League games this season, more than they have in any of their five campaigns in the competition. Seven of these defeats have been at home, with the Cherries only losing more at the Vitality Stadium in their debut season in the competition in 2015-16 (9).

Norwich: Will Canaries find their way back up?

Lost cause: Will Norwich score another goal – let alone record another win – this season? The Canaries hit three in a memorable win over Manchester City earlier in the season but have failed to find the net in their last five league outings, which have all ended in defeat.

Former Norwich City striker Dion Dublin, speaking to BBC Radio 5 Live: “Norwich’s biggest problem isn’t going down. It’s can they hold on to their best players? If they all go, I don’t know how Norwich will find their way back.”

Key stat: Norwich have lost 22 Premier League games this season – in no top-flight campaign have they ever lost more. Their highest number of defeats in a league season is 24, with the Canaries last losing that many in the 2008-09 Championship campaign.