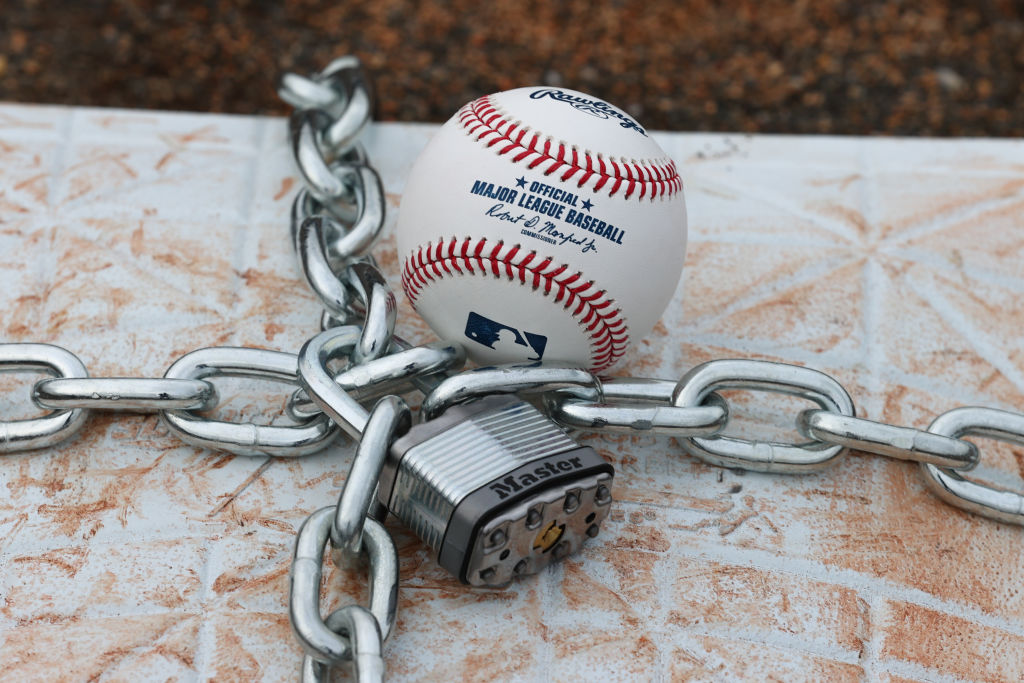 Most people in the UK would close their curtains if a game of baseball was going on at the bottom of their garden.

The problem is, when they opened them three hours later, they would likely find the game still hadn’t bloody finished.

Last year, the average MLB fixture lasted for three hours, ten minutes and seven seconds which, in a 162-game regular season, equals more than 21 days of solid playing per club. This was in spite of attempts to shorten it.

So, at least on that front, those who run the sport have managed to reduce the time of games this season… to zero.

The March 31 season start has been pushed back to April 14, following the expiration of the collective bargaining agreement between the league and the Major League Baseball Players Association, and their inability to reach agreement on a new one.

This is called a ‘Lockout’ and it does exactly what it says on the tin. Owners literally halt all activities. Players can’t even enter any team facilities, nor can contract negotiations take place. Everything is padlocked. Seriously.

Why is this happening? Let me give you exactly 140 words. Please don’t close your metaphorical curtains.

It’s complicated. Firstly, players want young ballers to get properly paid sooner, with rules changed to stop owners strategically holding players back in the Minor Leagues — this is essentially a form of youth team and reserves — so they can delay giving them that big contract.

Then, there’s tanking. Baseball operates not on a salary cap but on a Competitive Balance Tax.

If teams report a payroll above an agreed threshold, they pay a tax back to MLB that benefits less successful teams. This can provide incentive to spend way less in wages and, in essence, get paid to absolutely suck.

The key is finding the balance between competition and incentivising all teams to strive to win, which is hellishly difficult.

There are other issues, such as expanded play-offs and potential rule changes. Put simply, it’s an unholy mess. The last time baseball was disrupted by a dispute between players and owners was 1994, and it was the year after I first fell so desperately in love with this broken beauty. From the sound of ball on leather for that final strike out, to the perfect ping that only a home run makes. You know. You just know.

However, I discovered a damaged sport with masses of empty seats, as fan anger and disillusionment reigned supreme.

Herein lies the problem. While I see merit in what the players are fighting for, baseball can ill afford to turn any more fans off at a time when it’s trying desperately to convince a younger audience they are worthy of attention.

Straight TV ratings are not a fair indication of popularity in an ever-more fragmented market, with online platform MLB.TV a good example of baseball doing better, but the bigger picture doesn’t lie.

Only seven per cent of baseball fans are under 18, with the average age of a diamond devotee around 57, and that’s where all this ties together or, depending on your outlook, ties baseball in knots.

The NFL and NBA seem purpose built for modern times. Everything is easier.

The fashion, the street cred, the video games, the marketing and the incentives to invest your time and effort.

Baseball is all about the ‘tick tock’, when it needs to focus more on ‘TikTok’.

‘Build it and they will come’. That’s what ‘Field of Dreams’ romantics will tell you, but the reality is the sport’s complex financial wars and cancelled, already elongated games, are a real turn off. Baseball isn’t dying. That’s a soundbite for clickbait, but it has health issues that, in the longer term, may be leaving wounds that are just too deep to fully heal.