Perth are likely to leave a final call on whether NBL MVP Bryce Cotton plays in Thursday’s blockbuster against Sydney until tip-off.

Cotton flew to the harbour city with his teammates but it remains unclear if he will return from a thumb injury.

His inclusion would give coach Trevor Gleeson an entirely healthy squad to choose from against the Kings. 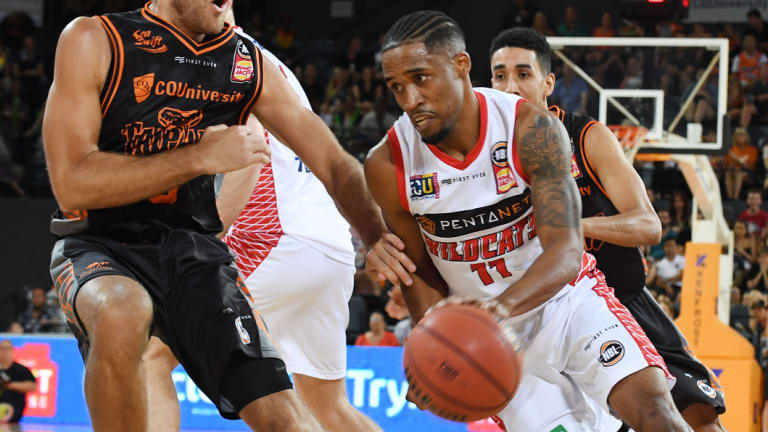 MVP: Perth will give Bryce Cotton until tip-off to prove his fitness.Credit:AAP

Gleeson’s ladder-leaders have yet to face the Andrew Bogut-led Kings, who had won five of six matches before last week’s two-point loss to champions Melbourne United.

The Wildcats have won 10 of their opening 11 games and will be boosted by the return of captain Damian Martin and centre Angus Brandt.

While extended squad members Sunday Dech and Lochlan Cummings also boarded the plane to Sydney, Cotton will be given until game time before a final decision is made.

‘‘He has to get back on court and play comfortably with that thumb. He hasn’t been able to do that yet,’’ Gleeson said. ‘‘There’s still some swelling there that hasn’t gone down.’’

Gleeson urged his big men to embrace the challenge against former NBA star Bogut, who is averaging 11 points, 12 rebounds, four assists and three blocks a game.

‘‘If you’re not fired up to play against the best centre, arguably, that Australia has produced on the world stage and play him in a NBL game, I think you might be in the wrong sport,’’ Gleeson said.

‘‘Not only is he huge, he’s got a great basketball IQ.

‘‘He’s a big guy who averages almost five assists per game, and add in the fact the impact he has around the rim with his shot blocking – he’s a really big focus for them.

‘‘He’s unselfish. He doesn’t care about his own stats. He just wants to get the stats for the team.’’