Tokyo: The feel-good story the world is craving has arrived, with Danni Di Toro and Ryley Batt flying the Australian flag high and proud at the Paralympics opening ceremony on Tuesday night.

Unlike at the Olympic equivalent, Japanese organisers got on with business and fast-tracked athletes coming out for their march within 20 minutes of the ceremony beginning. 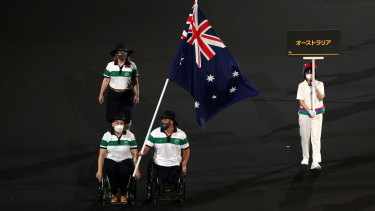 The decision to have athletes sit in the middle of the stadium first almost backfired when a downpour hit, but that didn’t dampen the mood during a three-hour show full of energy and excitement.

Di Toro and Batt, plus Australian chef de mission Kate McLoughlin, made their way out onto Tokyo’s Olympic Stadium 30th on the list – as per the Japanese alphabet – out of 163 National Paralympic Committees.

Fitted with an Akubra each and no doubt grins from ear to ear underneath their masks, the Australians were one of the smaller teams on the evening.

Most countries were happy to send other athletes along with flag bearers, but Australia wasn’t taking any chances. New Zealand didn’t even take the risk of flag bearers.

McLoughlin has worked around the clock – while finding the time to hand-write a letter to every single athlete, and horse, in the team – to get Team Australia to the starting line of these Paralympics.

“I have enormous pride,” McLoughlin said. “They have got here against the odds.” 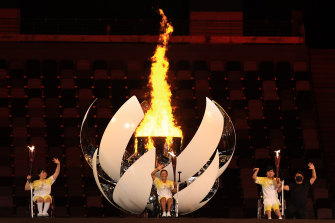 The flame is lit during the opening ceremony of the Paralympic Games on Tuesday night.Credit:Getty Images

Australia’s team required mandatory vaccinations and implemented stricter protocols than their Olympic counterparts but, according to McLoughlin, there have been no complaints over the decision that only flag-bearers could attend Tuesday night’s opening ceremony.

“Whilst it is far from ideal, safety is our number-one priority,” McLoughlin said.

The rest of the Australian team and staff gathered in the village, donning white and green polo shirts with their own Akubra hats, before giving Di Toro and Batt a guard of honour on their way out to the opening ceremony.

They cheered from the village, soaking up the atmosphere as much as they could while Di Toro, a seven-time Olympian, and Batt, perhaps the greatest wheelchair rugby player in history, did their teammates proud before a blockbuster 12 days of competition.

The first athlete to march out was Afghani-born athlete Abbas Karimi, who was born without arms, representing the Refugee Paralympic team. He fled Afghanistan when he was 16 before taking up competitive swimming in the United States.

Four teams later and the Afghanistan flag made its way out. With no athletes competing due to the unfolding situation in recent weeks following the Taliban takeover, the flag was carried by a volunteer in a show of “solidarity and peace” by the International Paralympic Committee. 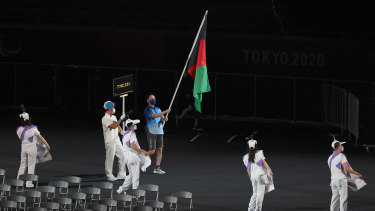 A volunteer holds the flag of Afghanistan. Credit:Getty

The usual kaleidoscope of uniforms came out to a stadium playing deep house music that would not out of place at a Shinjuku nightclub.

Just like the Olympics, no crowd took the shine off the event, even if there were some schoolchildren in the stands. This would have been a full house had COVID-19 not relegated supporters to their homes for the next 12 days as Tokyo battles through a state of emergency with no end in sight.

The afterglow of the Olympics has well and truly worn off in Japan, with escalating COVID-19 numbers keeping everyone on high alert. 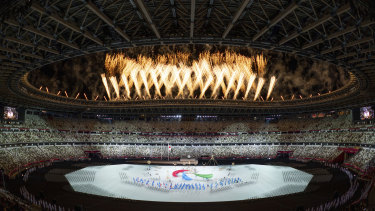 Fireworks are set off at the Paralympic opening ceremony. Credit:Olympic Information Services/IOC

Tuesday marked the first positive athlete COVID-19 case in the Paralympic village but McLoughlin confirmed it was not an Australian.

“I feel like there is a sense of calm in the village,” McLoughlin said. “We have put so many measures in place to keep them safe. We’ve created our own bubble within the village.

“There is an enormous sense of gratitude for what the Japanese people have done to get the Games to this point. We understand it’s a horrendously difficult time for them at the moment with COVID-19 numbers rising and I think it’s not lost on the Australian Paralympic team.”

Now the Games are finally here, the real fun begins. An auspicious time zone and the fact millions of Australians are in lockdown is the perfect opportunity for a team of all shapes and sizes, with unique stories to tell, to show off what they can do. 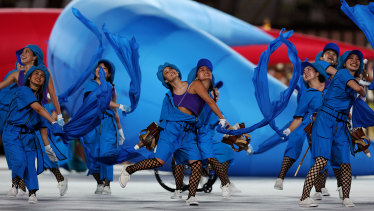 Channel Seven’s pre-ceremony video montage of Australia’s Paralympic heroes was spine-tingling and there are real hopes these Games can be a game-changer for athletes with a disability.

The world needs good news stories that warm the soul and few sporting events can produce such remarkable tales like the Paralympics.

“It’s going to bring Paralympic sport into every single lounge room in Australia,” McLoughlin said. “The fact there are young kids out there, whether they’ve got disabilities or not, who are going to know our amazing athletes … that’s a beautiful thing for the movement.