Andrew Fifita was behind one of rugby league's great selfless acts when he ditched NSW and Australia and their big pay packets to choose Tonga.

Now Fifita has put his own self-interests on the backburner again by encouraging Tongan wrecking ball Tevita Pangai Jnr to chase his NSW dream. 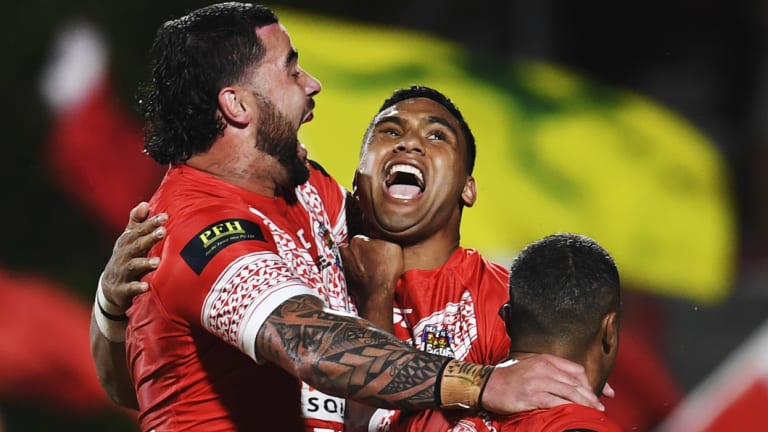 Bond: Tevita Pangai Jnr and Andrew Fifita celebrate a Tongan try during the Test against Australia in October.Credit:NRL Photos

Pangai Jnr has set his sights on forcing his way into Brad Fittler's NSW team next year, even though he would have to turn his back on international favourites Tonga.

And it was only after a decent conversation with Fifita, whose allegiance went the other way, which reassured the 22-year-old he was doing the right thing.

"I spoke to Andrew and he said the difference between me and him was he already knows what it is like to play for NSW and I don't,'' Pangai Jnr said.

"He said, 'Do whatever your heart tells you', and he would not look at me any differently.

"I'm happy I got that word from him. It was pretty scary to front a senior player.

"I was tossing it up during the year. After watching the Origin series I spoke to him about it in camp, he said you can always come back and play for Tonga. He said it's up to you.

"After the World Cup [in 2017] we enjoyed it so much and were coming off such a high. Then Origin came around and I started thinking, 'Have I made my decision too early?'

"It was good to get recognised for my form during the year and be invited by 'Freddy' [Brad Fittler] to the [Blues camp].''

Fifita gave up nearly $100,000 for missing the Origin series to collect a few thousand dollars to play a mid-year Test with Tonga. Last year his decision to snub the Kangaroos after he was named in the World Cup squad meant he also sacrificed $50,000 for their tournament victory to play for a pittance with Tonga, who almost made the final.

The scenes at Mt Smart Stadium last month for the sold-out historic Test between Australia and Tonga were unforgettable, with Pangai Jnr causing all sorts of headaches on the right edge. 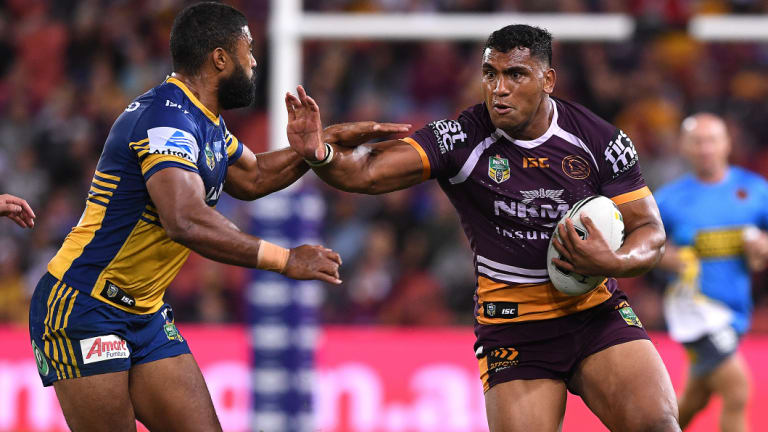 Hot property: Tevita Pangai Jnr is off contract at the Broncos at the end of 2019.Credit:AAP

Brisbane snapped up Pangai Jnr for one more year, with most assuming he would follow Wayne Bennett to South Sydney in 2020.

Pangai Jnr gave nothing away about his long-term plans but did say the reason for the short extension at Red Hill was because of his troublesome hamstrings. He believes if he can remain fully fit, it will only lead to a lucrative, longer-term deal.

Fellow Tonga star Manu Ma'u was another who did not begrudge the young back-rower for his pending switch.

The Tongans had made a pact at the end of the World Cup to stick together, but because of Pangai Jnr's age Ma'u wanted to see him go all the way with the Blues and Kangaroos.

"I'm not surprised and I think it will be good for him,'' Ma'u said.

"He's still young and has to make the most of his opportunities.

"He's a gun, he's always been a gun. He's pretty tough and has his head switched on as well. He's got a good future ahead of him.''

NSW have no shortage of gun back-rowers but Newcastle-raised Pangai Jnr is not without hope of a bench spot for next year's series.