Warwick Farm trainer Gary Portelli is ruing the move of Saturday’s meeting to Randwick's Kensington track as it has dented his confidence about Nicci’s Gold.

“At home [at Warwick Farm] I thought she would just win,” Portelli said. “She is in great form, but her style of racing isn’t really suited to the Kenso, where leaders and front runners get an advantage. 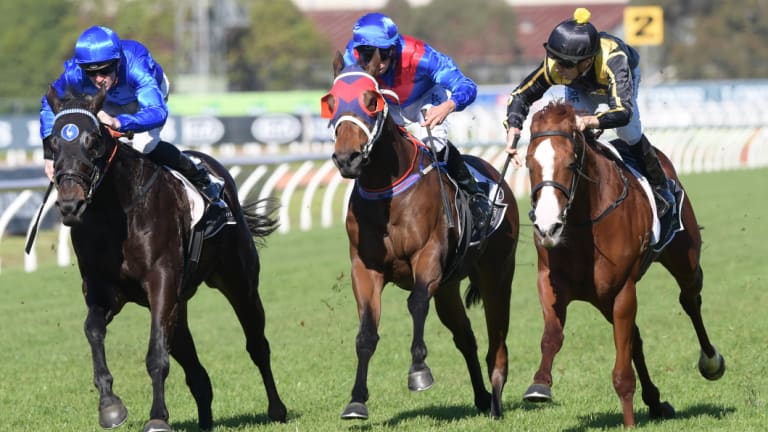 Storming home: Nicci’s Gold fires down the outside to win at Rosehill last year.Credit:AAP

“It is more of a turning track but if she can cope with it, I’m sure he will be in the finish.

"The good thing is we have Jason Collett back to ride her, he just gets on with her well."

With heatwave conditions expected, the meeting was moved from the west by stewards amid welfare concerns on Tuesday and there will be a heat policy invoked during the afternoon on Saturday.

Nicci’s Gold has been in good form this preparation and got a win with a storming effort at Warwick Farm two weeks ago. She steps out to 1550m on Saturday, a trip where Portelli thinks she will be comfortable.

“She has only won to 1400m but her style of relaxing says that a mile should be her best trip,” he said. "I actually thought of running her in the Belle Of The Turf but Jason had a ride, so we opted to go this way.

"I think she is up to stakes company.

“I was hoping she might even be able to be a bit closer but she drew wide, so will have to go back and hope for luck. But she has a turn of foot that will take her a long way if they run along.”

Earlier in the afternoon, Portelli will look to qualify three-year-old A Million Dreams for the Karaka Milions later in the month in New Zealand.

The Showcasing three-year-old has only had the three starts being placed in maidens at Hawkesbury and Canterbury before showing fight to lead all the way on the Kensington track before Christmas.

“He is owned by Max Whitby and Neil Werrett and you can see by the name what they were thinking,” Portelli said. "There's no pressure there.

“We just need to get his rating up to get a run in the race in New Zealand and if he could win this race, he would be on the plane.

“He has always shown a bit of talent, he has drawn well in gate two and should be able to get his own way in front.

“It would be good to get to New Zealand because I don’t have anything going to the Gold Coast next week.”

Portelli also has Above And Beyond in the three-year-old contest, dropping in the weights at his first Saturday appearance.

“He did a good job to win a couple early in this prep, but paid for it,” Portelli said. “He was game under big weight on Boxing Day and dropping back to 56.5kg will be a big help for him.”