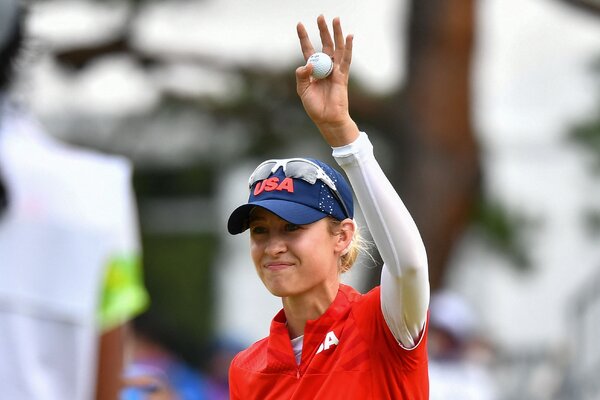 Nelly Korda of the United States held off a final-round challenge from Japan’s Mone Inami and New Zealand’s Lydia Ko to claim the gold medal in women’s golf at Kasumigaseki Country Club.

Her victory, six days after Xander Schauffele won the gold in men’s golf, gave the United States a sweep of the tournaments at the Tokyo Olympics.

Korda, the world’s top-ranked women’s golfer, had led after the second and third rounds, and closed with a two-under-par 69.

But Inami and Ko both shot six-under 65s on Saturday, methodically slicing into the 23-year-old Korda’s advantage and taking the race for the gold to the day’s final holes.

Inami, 22, birdied the 17th hole to pull even with Korda with a hole to play, but she then bogeyed the final hole, dropping her one shot off the lead. That left Ko, 24, who was also a shot behind, as the only challenger for the gold medal, but she finished with a par that was promptly matched by Korda.

Korda, who won her first professional major at the Women’s P.G.A. Championship in June, left the 18th green with a broad smile, but for Inami and Ko, the day was not over: They immediately headed for a playoff to determine who would claim the silver medal, and who would get the bronze. That second competition lasted a single hole: Inami made par and finished second when Ko recorded a bogey.

Korda’s older sister, Jessica, also played for the United States at the Tokyo Games. Jessica Korda finished in a tie for 15th, then returned to the 18th hole to embrace Nelly after her victory.