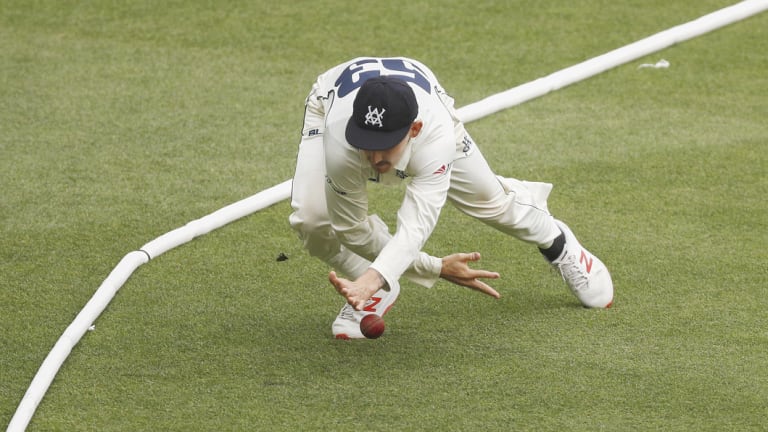 Nic Maddinson of Victoria attempts to keep the ball in play on day two of the Round 6 Sheffield Shield match against Western Australia.Credit:AAP

Mitch Marsh blew an opportunity to push his case for national selection as Victoria continued to dominate the Sheffield Shield match against Western Australia at the MCG on Saturday.

All-rounder Marsh made an unconvincing 21 in WA's first innings before he stretched forward and feathered a catch to wicketkeeper Sam Harper from fast bowler Scott Boland.

He had almost dragged Boland back on to his stumps at 3 and was dropped at second slip by Cameron White (a rare luxury, since White is a famously safe catcher) at 6 before his dismissal.

Marsh, dumped from the Australian team for the first Test against India, also had a rough time with the ball, taking 1/82 from 18 overs.

He presented a forlorn figure as he walked off the arena, perhaps pondering the umpire's decision or his own recent drought of runs (30 runs in four innings during the Test tour of the Middle East). As a national debate rages about the position of his elder brother Shaun, he has looked a long way from regaining his place in the Test team as an all-rounder.

Boland was rapt to get the WA captain's scalp.

"He looked like he was hitting the ball nicely, so it was a big wicket to get," he said.

"Patto could've had him a little bit earlier, but (we're) happy to see the back of him. It was a pretty faint nick but I felt it was only bat. It wasn't near his pad. I thought that and the umpire thought that."

WA were 5-170 at stumps in reply to Victoria's first innings of 9-424 declared, still 254 runs behind after two days' play. Victoria, already on top of the Shield table with three outright wins, are in with a chance of securing a fourth victory before the season takes its Big Bash interlude over the festive period.

The competitive Boland was the main destroyer with the ball, taking 3-39 to continue his groundbreaking season. Victoria have three players in the Australian team for the Adelaide Test but Boland cannot be too far away from elevation too, his 33 wickets at an average of 15 this season standing out. 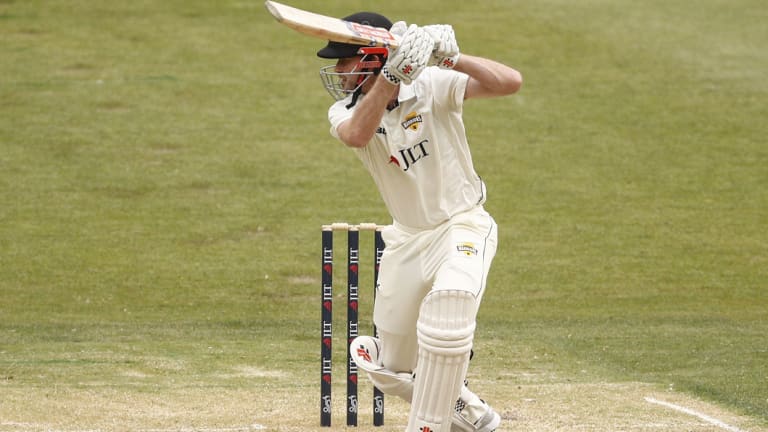 Injury-troubled quick James Pattinson also showed great signs again with the ball, bowling with good pace and fire as he continues his comeback from a series of back issues.

D'Arcy Short was the only WA batsman to show up, spanking four outrageously good drives down the ground for early boundaries, and finding his way to 42 before White took a brilliant second slip catch to dismiss him.

Earlier the Victorians piled up a big first innings score on the back of Nick Maddinson's 162 and a century to veteran White (119). Resuming at 3-311, the Vics lost Maddinson when he walked across his stumps to Jhye Richardson and was lbw, but White pushed on from his overnight score of 65 to secure his 22nd century in first-class cricket.

White was subdued by his usual standards other than a brief few moments when he twice slapped Short down the ground, rushing from 89 to 100 in the space of three balls. At 35 years of age and coming off an outstanding JLT Series, he still presents as being a level above state players.

After an attritional first session in which the WA bowlers pinned Victoria down, the home team withdrew at 1.49pm and gave their bowlers a chance.  WA were quickly in trouble with Boland hitting the bat hard and making the ball stand up.

When all-rounder Marcus Stoinis, who was earlier troubled by a leg injury and bowled sparingly, skied a catch from Jon Holland's bowling WA were 5/112 and still more than 300 runs behind.