Meyers Leonard, a reserve center for the Miami Heat, will be “away from the team indefinitely,” the team said Tuesday night, following his use of an anti-Semitic slur while he was playing a video game on a public livestream.

“The Miami HEAT vehemently condemns the use of any form of hate speech,” the team said in a statement. “The words used by Meyers Leonard were wrong and we will not tolerate hateful language from anyone associated with our franchise. To hear it from a Miami Heat player is especially disappointing and hurtful to all those who work here, as well as the larger South Florida, Miami Heat and N.B.A. communities.”

Leonard said the slur, followed by a sexist vulgarity, after calling another player a “coward” because of how they tried to kill his character in the game. The video was recorded Monday but did not receive widespread attention until Tuesday, after the clip of Leonard uttering the slur was posted to social media. By the afternoon, it was the top trending topic on Twitter in the United States.

As the video of Leonard saying the slur was circulating, Leonard was livestreaming a different session of “Call of Duty: Warzone,” an event he promoted Tuesday on his Twitter account, which has more than 177,000 followers. The live chat on that stream began to fill with comments about the slur, and Leonard hastily ended his participation after receiving a phone call.

“My wife needs me. She just called. I’ve got to roll, brother,” Leonard said as he signed off.

The Twitter post advertising his livestream was soon deleted, as were dozens of past videos of him gaming on Twitch. Leonard’s words were soon condemned by the Anti-Defamation League, which wrote in a statement that it was “shocked and disappointed to see @MeyersLeonard use this ugly, offensive #antisemitic slur. We have reached out to the @MiamiHEAT and @NBA about this and urge Mr. Leonard to issue an apology immediately for this egregious and hateful rhetoric.”

Leonard apologized Tuesday night in a statement posted to Instagram, writing that he was “deeply sorry for using an anti-Semitic slur during a livestream yesterday.” He claimed to not know what the word he used meant, but said that his “ignorance about its history and how offensive it is to the Jewish community is absolutely not an excuse and I was just wrong.”

It is not yet known what discipline, if any, Leonard will face from the N.B.A. Mike Bass, an N.B.A. spokesman, said in an afternoon statement: “We just became aware of the video and are in the process of gathering more information. The N.B.A. unequivocally condemns all forms of hate speech.” The Heat said they would cooperate with the N.B.A.’s investigation.

Leonard is a huge fan of video games. In 2019 he invested in FaZe Clan, a popular e-sports team, writing that he was “excited to be a part of the premier organization in the space and continue building my brand in the world of gaming/esports.”

But that brand was unquestionably tarnished on Tuesday, and a number of gaming companies affiliated with Leonard denounced him.

In a statement posted to Twitter, FaZe Clan said that it was “incredibly disappointed to hear Meyers’ stream today” and that “while Meyers is not a member of FaZe, we are cutting ties with him.” A spokeswoman for FaZe Clan did not respond to an email asking what cutting ties with Leonard meant and whether FaZe Clan was returning his investment.

Three gaming companies that sponsored Leonard, and had their logos visible on the stream where he used the slur, cut ties with him.

Origin PC and Scuf Gaming, which are both owned by the computer hardware company Corsair, released identical statements Tuesday that said they “decided to cease our working relationship with Meyers.” Astro Gaming, whose gaming headsets Leonard was giving away as a promotion on his Twitch channel, said it was ending its relationship with him “effective immediately.”

Leonard, a 2012 first-round pick of the Portland Trail Blazers, is in his ninth N.B.A. season but has appeared in only three games this campaign. He is expected to miss the rest of the season after having a shoulder operation last month. Last season, Leonard started 49 games for the Heat, averaging 6.1 points and 5.1 rebounds per game as the team made it to the finals. 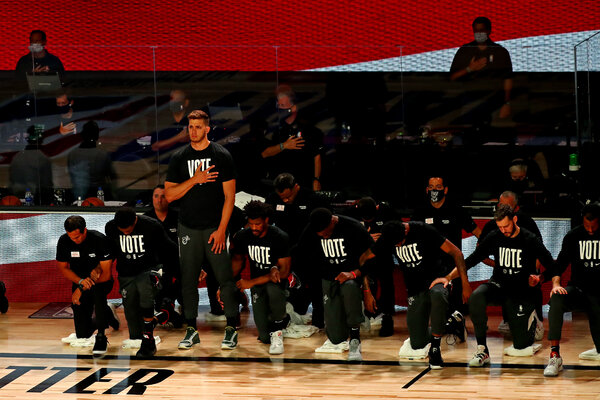 He also received attention last summer for being one of the few N.B.A. players who declined to kneel during the playing of the national anthem, in protest of racial injustice, when the league resumed the 2019-20 season at Walt Disney World. Leonard, who is white, said that he supported the Black Lives Matter movement and did not see kneeling as disrespectful, but that he also wanted to honor his brother, who served in the military.

Leonard is being paid around $9.4 million this season. The Heat hold the option of whether to extend his contract for next season.

Online video game streaming — and its rapidly expanding audience — has turned gamers into celebrities, but has also become a site of controversy. The audio and text chat functions in many video games are notorious for frequent utterances of slurs and a culture in which gamers will say anything to get a reaction. In 2017, Felix Kjellberg, a popular video gamer known as PewDiePie who currently has over 109 million subscribers to his YouTube channel, was dropped by many mainstream sponsors, like Disney, after it was reported that he had used anti-Semitic slurs in at least nine videos.

Celebrities, and especially athletes like Phoenix Suns guard Devin Booker and San Diego Padres pitcher Blake Snell, have been attracted to livestreaming video games. But some have also gotten into trouble for what they have said. Last spring, Kyle Larson, a popular NASCAR driver, was dismissed from his team and suspended by the organization after using a racial slur during a livestream of a virtual race.