Michael Cheika's World Cup tilt has been dealt another blow with confirmation rampaging back-rower Sean McMahon has signed with the Sunwolves.

McMahon is waiting on a final medical clearance after picking up a foot injury but confirmed he would pass up an opportunity to play at next year's World Cup and join Japan's Super Rugby side, the Sunwolves, in 2019 – pending the medical clearance. 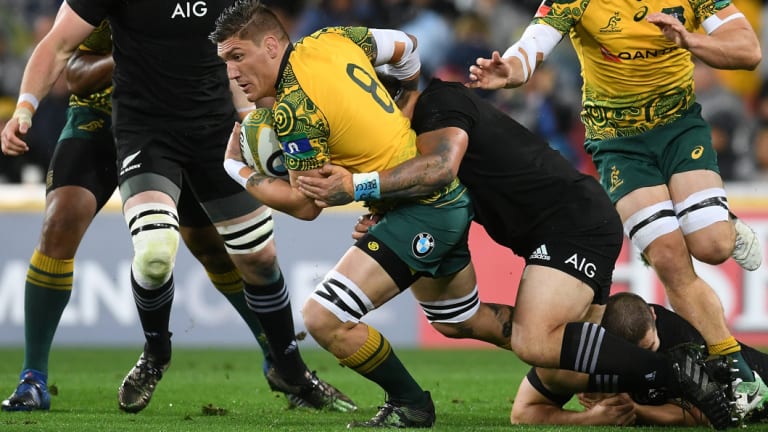 Staying put: Sean McMahon has decided to play for the Sunwolves next year. Credit:AAP

"It was a tough decision but I love being here in Japan and the opportunity was there and I just went with it," he told Kyodo News.

The news is a major blow for Australian rugby and the Wallabies, both of which could do with McMahon's skills and abrasive class, especially in a World Cup year.

With 26 Tests under his belt and all of them handed to him by Cheika, the 24-year-old was expected to play an influential role in Australia's campaign in Japan.

But McMahon turned down a number of approaches from Rugby Australia, including personal appeals from Cheika and Reds coach Brad Thorn. He is understood to have been unhappy with the remuneration on offer and happy in Japan with his wife and son.

The Brisbane-raised former Rebels back-rower has been playing for Suntory in Japan's Top League since 2017, but injury has hampered his playing contribution. He played 50 minutes in the side's clash with Kubota Spears on Saturday but said a foot injury was delaying his announcement in the Sunwolves squad for next season.

"I did just a kind of minor Lisfranc [fracture] after getting into an awkward situation in a ruck," he said.

"Everything's OK. But just getting back into that first game the lungs were burning a little bit and I was just trying to get that rhythm back.

"My foot still needs a bit of work to get back to the level where I want to be playing at."

Cheika, meanwhile, was expected to arrive back in Australia on Sunday or Monday and hit the road with RA high performance boss Ben Whitaker for a World Cup roadshow with the Super Rugby teams.

On the agenda will be a January camp with Wallabies players and locking down agreement on playing loads during the Super Rugby season.

Whitaker will also be conducting a review of the Wallabies season that will be presented to the RA board ahead of a December 10 meeting and decide the fates of Cheika and his assistant coaches.

With few credible alternatives off contract at this point in the World Cup cycle, it appears increasingly likely Cheika will be spared the axe, potentially leaving his assistants Simon Raiwalui, Stephen Larkham, Nathan Grey and Mick Byrne in the firing line.

Overseas-based Australian coaches Scott Johnson, Scott Wisemantel and David Nucifora loom as targets for RA, while a host of highly rated international candidates come on to the market at the end of next year, including Dave Rennie (Glasgow), Warren Gatland (Wales), Joe Schmidt (Ireland) and Scott Robertson (Crusaders).