The Melbourne Cricket Ground will have more than $50 million spent on it in 2019, with officials revealing they have even pondered the benefits of pitching for a day-night Test.

As he confirmed the venue would begin growing up to four new pitches amid criticism of the current ageing drop-in decks, MCC chief Stuart Fox said it was crucial the most hallowed sporting venue in Australia maintained pace with newer stadiums. 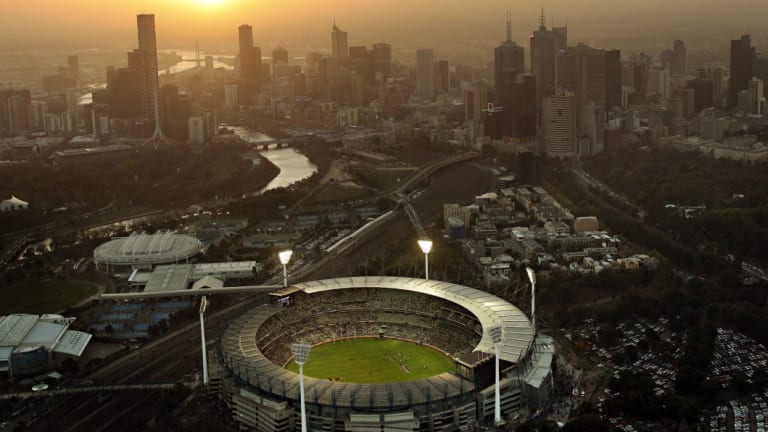 Could we the Boxing Day Test become a day-night match?Credit:Paul Rovere

One such place, Perth's new Optus Stadium, has made a splash by declaring it wants to poach the Boxing Day Test.

revealed this month that Optus Stadium boss Mike McKenna was intent on securing the iconic clash although it's extremely unlikely he will have success.

However, Cricket Australia and the MCC are still working through a new contract, and state government backing will be pivotal in discussions.

Fox said he was "amused" when told of McKenna's comments but conceded it was open season on all major events between the states.

"We are in discussions with Cricket Australia. They are progressing. Hopefully in the New Year, we can work towards a new content arrangement that will lock down the Boxing Day Test," Fox said.

"Why would you want to take it away from one of the most iconic stadiums in the world that has the capacity to bring 250,000 to 300,000 people through the gates over the five days? I don't know why you would want to ever explore taking that away.

"I certainly don't think it is going anywhere and Cricket Australia have said that. We are, obviously, working on a new arrangement with them that will unfold in the new year but it's a very competitive landscape across Australia. You would expect rival stadiums to be pitching for your content and that happens."

Victorian Premier Daniel Andrews has also declared the Test will remain in Melbourne but until a new contract is signed there is no guarantee.

This summer's day-night Test will be held in Brisbane next month after the Board of Control for Cricket in India rejected CA's plan for Adelaide to host a Test under lights for a fourth-straight season.

Fox said the MCC had informally discussed a day-night Test but there had been no serious discussion.

"We have pondered on what a day-night Test would look like. Adelaide have done really well and I think there is a spot for all of us here other than always trying to compete against each other," he said.

"This traditional slot has worked pretty well and it's really not our call – we are a venue for hire and Cricket Australia will determine those factors. We have pondered on it, whether we would ever make a play for it, we haven't discussed that in any sort of detail. We have traditionally enjoyed the current slot."

CA is reviewing its venue-hire agreements with several grounds. The Gabba has fallen in status because it needs fresh works, while Hobart's Bellerive Oval has all but disappeared from international contention because of sustained poor attendance. This opened the door for Canberra to host its maiden Test, which will be against Sri Lanka in February.

"The MCG is always going to be special but I watch with great interest about stadia development. We have just got to stay ahead of the game," Fox said.

"We can't let this asset age and we have got a lot of capital works planned – a new PA system, progressing to LED sports lighting, we have got a number of public bars and catering facilities to be upgraded. I think we will spend well over $50 million in the next financial year on the stadium. I think it's being competitive and relevant across the stadia landscape.

"I do think this [Boxing Day Test] is an iconic game in the best time slot of the year."