AUGUSTA, Ga. — By the time he reached Augusta National Golf Club’s 17th tee during Monday’s practice round, Cameron Champ had talked with his stand-in coach and tour guide about his upcoming wedding and how to navigate the course’s greens.

Now Phil Mickelson, 50 years old and a three-time Masters winner, had more advice for the man half his age who was making his first Masters appearance.

“If you’re going to miss this fairway,” Mickelson counseled, “miss it right, because you have an angle into the green.”

More than two dozen players made their Masters debuts this year under extraordinary circumstances because of the coronavirus pandemic — mandatory testing, a course largely emptied of spectators, the ritual springtime tournament being played in November. But the informal tradition of Augusta tutelage did not ebb. And at least some of the advice, conspicuous to any passer-by thanks to the absence of crowd noise, may have helped: On Saturday, 14 first-timers made the rain-delayed cut, a Masters record.

At day’s end, the top of the leaderboard was crowded with players in their inaugural appearances. The first-timers Abraham Ancer and Sungjae Im were tied with Cameron Smith for second at 12 under par, four strokes behind Dustin Johnson. Sebastián Muñoz finished Saturday tied for seventh at nine under par.

Champ, who shot a 68 on Saturday, will be at six under and tied for 15th as he starts the tournament’s final day, less than a week after his crash course with one of the most celebrated golfers of the era.

“I wanted to play with him and pick his brain and ask him questions,” Champ said after his practice with Mickelson. “He’s fun to be around, super talkative, and obviously, he’s a Masters champ.”

Augusta National has not crowned a Masters champion in his debut since 1979, when Fuzzy Zoeller won the green jacket. The course is among the most challenging in golf for a rookie to unlock, in part because access to it is so rare outside the tournament. Ancer played it for the first time just last week. Im went through all 18 holes alone on Monday, his first day on the course.

“I watched the Masters growing up so many times that I feel like I’m used to playing this course, even though this is my first time,” Im said through an interpreter on Saturday. 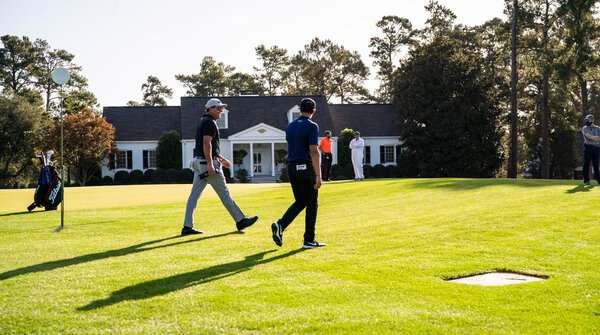 Still, advice is often welcomed. Im said he had spoken with K.J. Choi, who finished in the top 10 at the Masters on three occasions, about how to approach the course and had ended the conversation feeling encouraged. On the fairways and the greens this past week, other veterans proved eager to offer counsel about Augusta National, but still stopped far short of spilling every secret of the par-72 course.

“Ray Floyd, Crenshaw, Nicklaus, Palmer — they would all talk about putts, shots, things to watch out for,” Mickelson said, naming winners of a combined 13 Masters tournaments.

But for all the wisdom available to early-career players, there is only so much that can prepare a Masters rookie for the rigors of a course that is far more challenging, Ancer said Friday, than it appears in televised splendor. Besides, there was no guarantee that the tricks devised from successes and regrettable plays in Aprils past would hold up in November.

Tiger Woods, the defending champion, recalled that he had received advice from figures like Jack Nicklaus and Seve Ballesteros. But he said that they — and, later, he — had not shared all. Instead, Woods, a five-time Masters winner who is tied for 20th at five under, suggested there was no substitute for raw experience at Augusta.

“That’s just something also that you have to go through,” he said.

Woods’s approach may still represent something of an advancement for rookie-veteran relations.

Bob Goalby, the 1968 champion, recalled on Wednesday that players like Doug Ford and Sam Snead, both of them Masters winners, had offered him advice. Those exchanges, though, were often based in friendships, not necessarily pay-it-forward sensibilities, he said.

“Most people are more helpful today than they used to be — they used to try to trick you,” Goalby, 91, said, laughing. “We didn’t play for a lot of money, and you had to get the best little edge you could get, no matter how it was. You’d try to beat that guy by a stroke. Playing for the kind of money they play for today, they can gamble, and the next week they’re playing for $9 million instead of playing for $15,000, total.”

These days, some of the advice that the old lions dispensed is obsolete because Augusta National has evolved.

Muñoz figured that out when he practiced alongside the past champions Vijay Singh and José María Olazábal. He summed up their assessment as, “Man, it’s completely different from what we’re used to.”

“I think that kind of helped me because I didn’t try to play it the way it usually plays and just the way I perceive it right now,” Muñoz said.

Indeed, a barrage of advice carries its own perils.

Adam Scott, the 2013 winner, recalled practicing alongside Greg Norman in 2002, his first Masters entry, and Norman advising him simply to play the game. Scott finished ninth that year.

“In the years after that, I started asking people more and more things, and I found out where all the trouble was and never played good for about eight years here,” Scott said.

So on Monday when Scott practiced with Erik van Rooyen, who ultimately withdrew because of injury, he tried not to unnerve him.

“I told him the story of my first time here,” he said, “and I didn’t know anything and I did fine.”