MARTIN SAMUEL: Gareth Southgate is the man to deliver the Hollywood ending for England… the Three Lions boss has done so much beyond his remit but knows he’ll still be judged by Euro 2020 final result

The morning after semi-final night before, Gareth Southgate gathered his England players. He spoke about legacy, about representing the country, about winning respect. And then he got down to brass tacks.

You’ve got a choice, he told them. What colour medal do you want?

Southgate paused, as he told this story. He had seen all the goodwill messages telling him whatever happens from here, it has been a great tournament.

He has been made aware of the general feeling that he is a success as England manager, just for getting this far.

Ultimately, though, he cannot settle for praise and plaudits. A gold medal, a trophy, is the bottom line now. 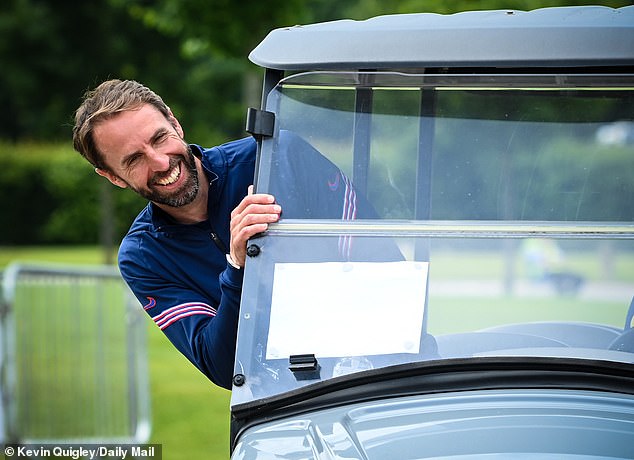 ‘That in the end is what yesterday and today, and tomorrow, are all about,’ said Southgate.

‘I know it won’t be enough for me and the rest of the staff, and for the players, if we don’t win it now. You get messages that are lovely, whether we win or lose. But that won’t be how it will feel on Monday.’

He has been here before. The 2018 World Cup was also judged positively, even when England exited at the semi-final stage. It didn’t feel that way on the night, though. Southgate put it all in context later, saw the wider picture, the journey.

In the moment, though, England were within touching distance of a World Cup final and lost, again, in extra time. This is even closer, being at Wembley, with all the attendant euphoria.

Southgate is only too aware that the progress of the England team is, now more than ever, tied to the happiness of the nation. So this, in its way, is bigger, the stakes higher. He has more to lose this time. 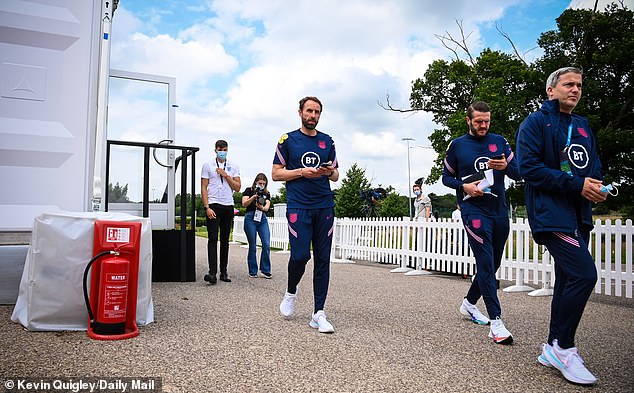 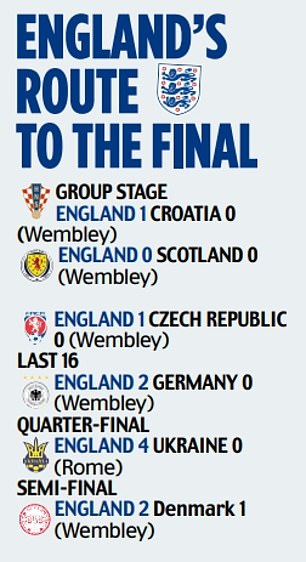 It is hard to reach finals, even for the most successful nations. Germany have trod this path once in the European Championship since 1996. The last five finals have featured seven different teams; in the World Cup it is eight.

As good as England are, this is a moment to be seized. However proud Southgate may be of the cultural shift achieved on his watch, it cannot be paraded around Wembley or on an open-top bus.

For the Southgate story — the missed penalty in 1996 to becoming a national hero — to go full Hollywood, it needs the big finish. It needs more than a sympathetic pat on the back and a handshake before the credits roll.

‘I could see why people think of this as a film script or whatever, but it was strange the other night after the Denmark game,’ he said, ‘because once I’d finished embarrassing myself on the pitch, all I could think about was how we’ve got to get this right now.

‘I wasn’t pinching myself thinking, “We’re in the final”. We’ve got to get the game tactically right because although there is great pride in what we are doing, and people are speaking really nicely about us, the professional in me knows the tactical role has to be spot on.

‘We’re playing a team that hasn’t lost in 33 games. It’s no use being able to speak about areas of society, if we don’t get the tactical bit right, the selections right, if we don’t manage the players the right way, the house falls down. I know this is a lovely period in many ways, but what doesn’t change is getting Sunday right.’

Southgate rarely plans to be front and centre for England, does all he can to credit his players and his staff, but one win — or heaven forbid, a penalty shootout — away from England’s first major trophy since 1966, the manager is unavoidably part of that narrative.

The player who volunteered to take the sixth penalty against Germany in 1996 — because he thought it was the right thing to do, not because he greatly fancied his chances — and missed, now stands on the brink of the greatest triumph of English football’s modern age. 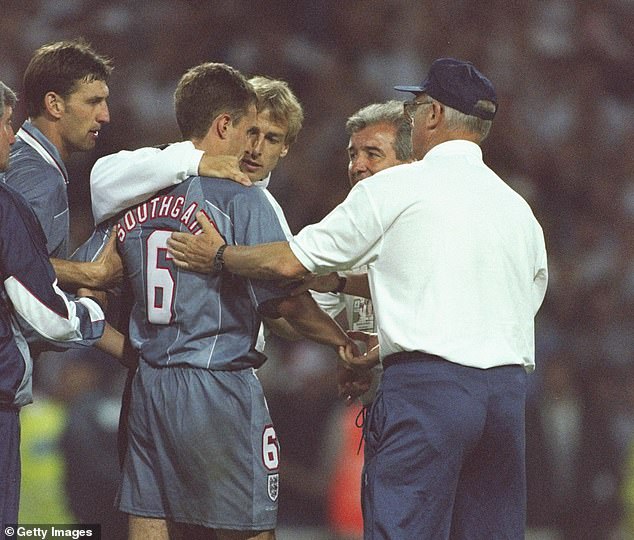 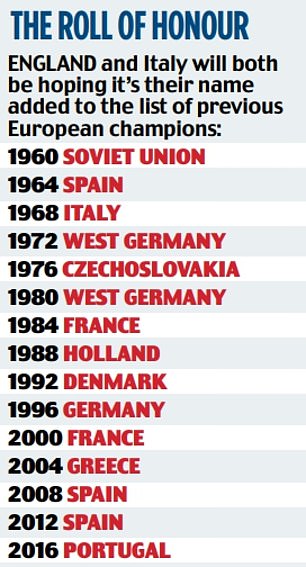 The young man who would walk out of a room if he heard the opening strains of Three Lions because it made him feel sad, could be responsible for the greatest sing-song the modern Wembley has ever heard. What would today’s Southgate say to his younger self, as he left the scene of his most public failure?

‘Well, I suppose if I was to be able to take something from that, if I’m talking to young people now, hopefully what they’ve seen is that those sorts of moments don’t have to define you,’ Southgate reasoned.

‘You have to work your way through them and develop resilience. There’s a really fine balance now, because we know young people need support and we’ve got to treat them in certain ways, but if you’re trying to achieve extraordinary things, which our players are, then you’re in an environment that is a lot more hostile, and it can’t always be supportive.

‘You’ve got to play in front of 90,000 people. You’re in the Colosseum and it can’t always be a cuddly, warm environment. So you’ve got to have resilience, or you’ve got to develop resilience. Those experiences can help shape you if you respond to them in the right way, but it isn’t always easy.

‘So I hope what happened to me has engaged people and been an example for old and young, but most especially the young ones because they’re working all that out in their heads, and maybe they can draw something from it in the future.’

Yet, in many ways, the game on Sunday, the improvements England footballers have made in terms of tournament progress is only half of Southgate’s tale. The rest of it, what can never be so easily recognised, is the cultural change that has taken place around England.

The team for its times, marshalled by a man who arrived with plans for a revolution; off the field even more than on it. He consulted Owen Eastwood who had advised on team culture to, among others, the All Blacks, South African cricket and Manchester City.

‘Owen spoke to former players and current players, researching what England had meant and what it meant in a modern sense,’ Southgate explained. ‘So it’s a much bigger piece of work than just what is happening now. 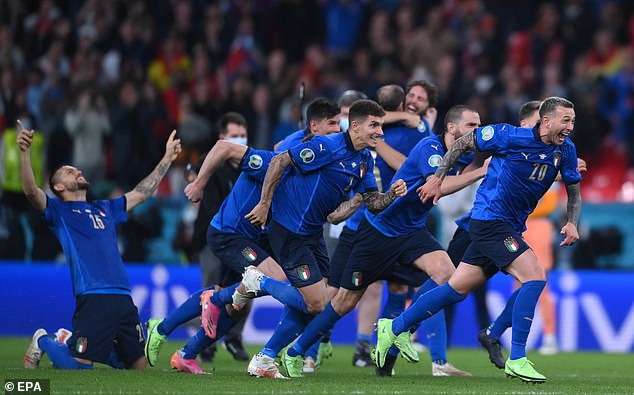 ‘But it all leads into culture, and culture is something that took us a little while to embed in the group. It has to be worked at every day. That’s why we have ended up with a group of players — Conor Coady, Jordan Henderson, Tyrone Mings — who might not always be playing, but have been incredible.

‘Marcus Rashford is in that, too. Marcus is a world star and he has accepted that his role here has to be different. That’s where your culture shines through; sessions like yesterday’s when they are the only lads training. Nobody is watching. That’s where the hard yards are done.

‘But I hope all the players have represented the country in a way that can be related to. I feel that’s important. The national team is different from a club. Some clubs have clear identities and I think they are powerful because of it. Yet we also have a view of what being English should represent and the standards we want to hit.

‘Of course, if you don’t keep winning those messages and what we stand for won’t have the same impact. But I think we still have to set the right standards as a group of staff. Our job is to help them be the best players they can be, but also help them grow as people.

‘We have exceptional examples of players setting a really good example for young kids who are watching them, and will aspire to be them through this tournament. 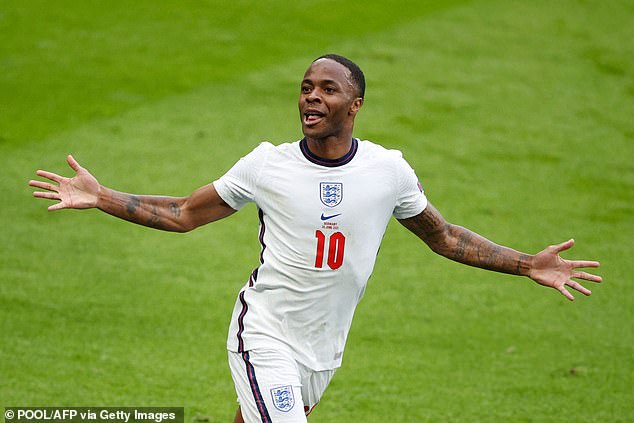 It’s important that their parents, when they are talking to those kids can say, “We are quite happy for you to be a Marcus, a Raheem Sterling, a Kalvin Phillips”, because they stand for the right things off the pitch as well as on it.’

And he’s right. Sunday night, with the wrong result, no one will want to hear this. Yet, in time, it will be recognised, the importance of what Southgate has done: the cultural shift, the inclusivity, the men he is producing, the conflicts and fears he has calmed.

‘You still have to win football matches,’ Southgate added, and that never changes. Yet England’s manager has won football matches, and has changed English football culture and, to borrow one of his favourite tropes, he has written his own history.

It may not have the perfect ending, of course, because it’s a football match. But then again, it just might.