MARTIN SAMUEL: This kind of fun CAN’T be bought… Super League Golf may be offering deep pockets for the best stars but Phil Mickelson’s historic performance at Kiawah Island shows history is the greatest currency of all

Just imagine if the Super Golf League had come along a year, maybe two, earlier.

In the sport of golf, Phil Mickelson went further than any man of his generation. Further than Julius Boros, the oldest winner of a major tournament, victorious in the PGA Championship at Pecan Valley, Texas, in 1968.

Further than Old Tom Morris, who was a mere stripling of 46 when he collected his last Open Championship at Prestwick in 1867. Mickelson will be 51 next month. He arrived ranked 115 in the world. He hadn’t finished top ten in a major since 2016, hadn’t won one since 2013. This was not meant to happen. 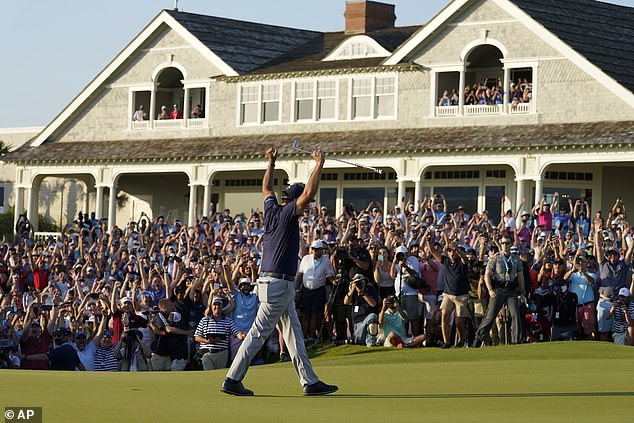 As for the much-vaunted Super Golf League, where does it go from here? A no-brainer, Lee Westwood called it, just last week.

At the age of 48, if offered £50m to play in the Super Golf League, Westwood intimated he wouldn’t think twice even if it meant going without another major championship entry, or a place at the Ryder Cup.

Yet what does he think now? What does any golfer of a certain age think having seen Mickelson lead the PGA Championship into day four, and stay there, with much younger men on his tail and in his wake? Might he think that if Mickelson can do it, so can he?

That if Padraig Harrington, at 49, can be in the mix, that if Kevin Streelman can be around the leaderboard at 42 and ranked outside the top 50, why would a wealthy man of great talent and ambition choose to take more money and run? Where exactly was the fun, the sport, in that? 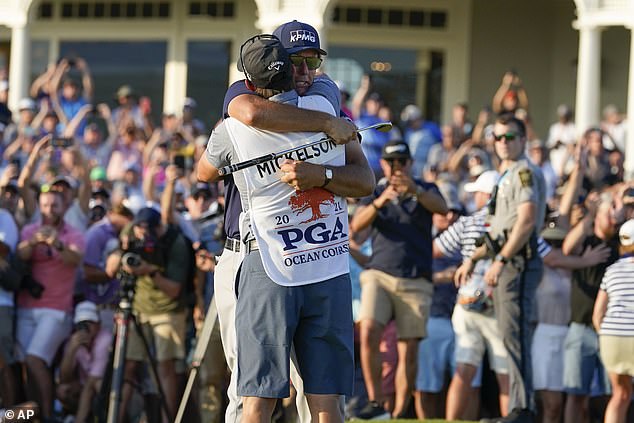 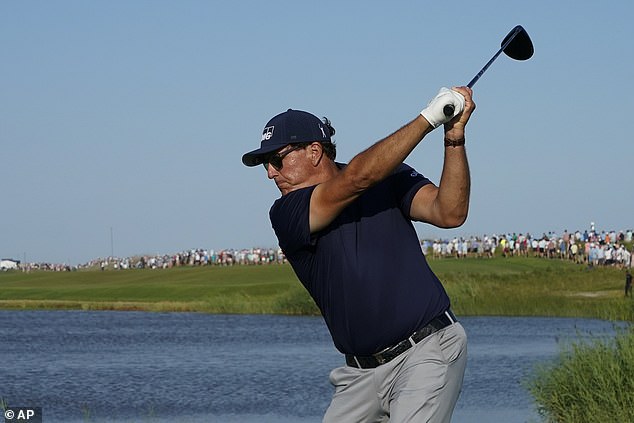 Mickelson certainly looked as if, for all the intense pressure of trying to close out a major’s final 18 holes, there was pleasure to be had rewriting the record books.

The chip from a greenside bunker on five, that dropped and took him two shots clear, to possibly the biggest cheer of the day? That looked fun.

The roar that greeted one of many sublime approach shots, not least at the 12th when he announced: ‘I kinda like that.’ Fun.

Outdriving Brooks Koepka, a man 19 years his junior, down the 16th. The mayhem on 18. Fun, fun, fun. On the fifth, Mickelson held his sand wedge aloft with a straight arm, punched the air twice.

He’s played a shot like that a thousand times, yet there is nothing more special than doing it at the right place and time. The Super Golf League? The money’s good. Insanely good. But the glory, the drama, the history, the meaning? That comes from taking on the same challenges that defined men like Jack Nicklaus or Ben Hogan, even contemporaries such as Tiger Woods.

Mickelson has been targeted by Super League Golf, no doubt for the same reasons the organisers came for Westwood. They thought he was done. Indeed, by comparison to Westwood, Mickelson probably was. For a start, he is already three years older. He hasn’t truly been in contention at a major since Royal Troon in 2016. He must have seemed exactly the sort of player who had nothing to lose and everything to gain by going into lavishly-funded exile.

This rather made a mockery of that presumption. It was a classic day four at a major: two shot swings, a matchplay event with Koepka ahead of a hungry chasing pack, including the dangerous Louis Oosthuizen. 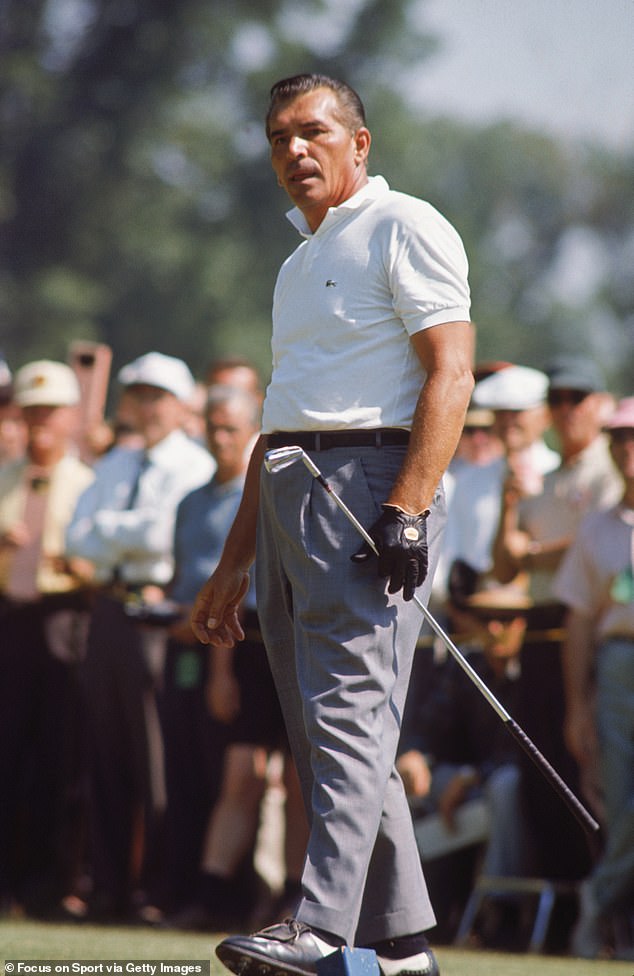 In the sport of golf, Phil Mickelson (above) went further than any man of his generation – including than Julius Boros, the oldest winner of a major tournament 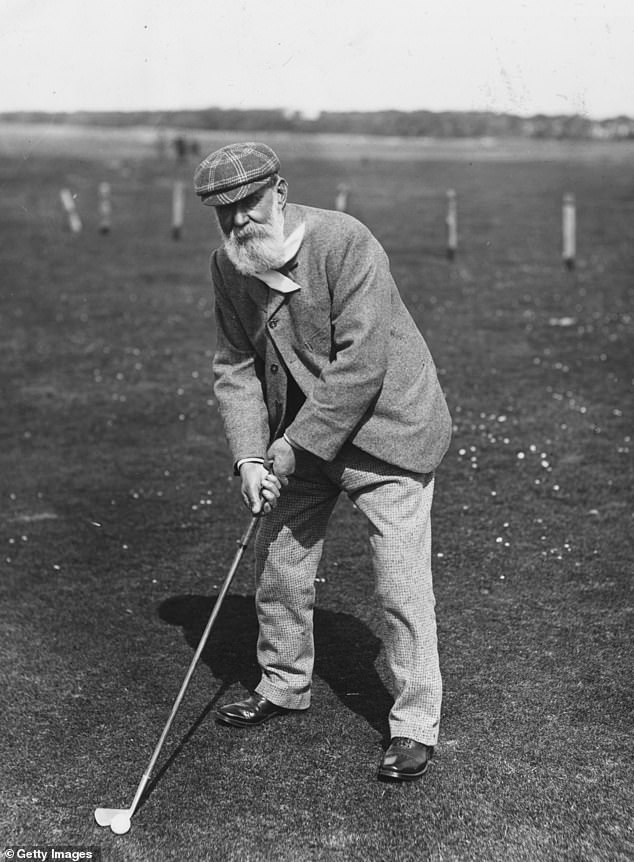 He also went t further than Old Tom Morris (above), who was a mere stripling of 46 when he collected his last Open Championship at Prestwick in 1867

‘Go on Phil,’ shouted a voice in the gallery, ‘show these kids how it’s done.’ Well, he didn’t exactly do that. This was no masterclass of percentage golf and composure.. But then holes 55-72 are rarely exhibitions of hitting fairways and greens in regulation. Instead, Mickelson delivered a lesson in riding the rollercoaster without throwing up.

And when Mickelson is making a play in which anything can happen, that wears off on opponents, too. Koepka started the day a shot off the lead but a clear bookmakers’ favourite because he was younger and more consistent and won his last major in 2019, six years after Mickelson’s triumph in the Open at Muirfield. Yet Mickelson’s refusal to simply shuffle off like a nice old man made Koepka nervous. He double bogeyed the second, he lipped out from inches on the third. He went bogey, bogey, double bogey on the par fives, twitching in a way few will in any Super Golf League event because once everyone gets £50m and there is no glory in winning a storied title, what else is there?

Nothing like this. Nothing like the glory Mickelson chased around Kiawah Island. Was it worth more than the Super Golf League’s big sack o’ cash? Of course it was. Every stride of it. That’s major tournament golf. That’s history. That’s the real no-brainer.